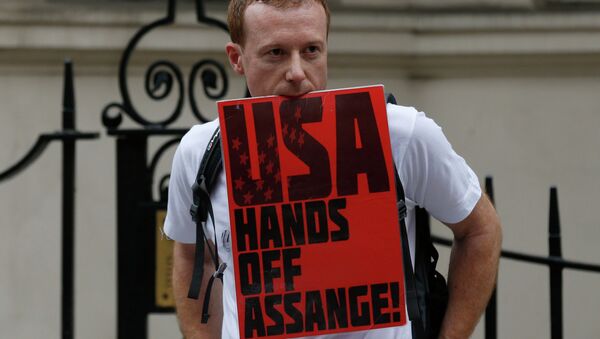 Two wings of the Department of Justice and the FBI remain engaged in a criminal investigation into the website, the Guardian reported, citing information from a ruling by a federal judge in Washington, DC.

After considering evidence from both the Justice Department’s criminal and national security divisions, as well as from the FBI, Judge Barbara Rothstein ruled “this court is persuaded that there is an ongoing criminal investigation.”

The federal agencies had argued that their inquiry into WikiLeaks was “separate and distinct” from the prosecution of Chelsea Manning, the army soldier who leaked the vast database of secrets, the Guardian reported.

Manning was convicted under the Espionage Act and sentenced in August 2013 to 35 years in military custody.

WikiLeaks’s lawyer, Michael Ratner, said the disclosure left no doubt about the US government’s intentions.

“We are talking about a serious, multi-subject long-term investigation of WikiLeaks and its people,” Ratner told the Guardian. “This confirms in spades that the US authorities are coming after WikiLeaks and want to close it down.”

The court ruling arrived in response to a freedom of information request from the Electronic Privacy Information Center, which requested all DOJ and FBI records regarding anyone investigated for connections to WikiLeaks.

The judge ordered the federal agencies to double check their records, but ultimately did not force them to hand over any materials, saying doing so could interfere with law enforcement activities.

In January 2011, it was revealed that the US government had ordered Twitter to hand over private messages from a then WikiLeaks volunteer, the Icelandic member of parliament Birgitta Jónsdóttir.

Earlier this year, it emerged that a similar demand for information had been imposed on Google relating to three WikiLeaks staffers.

Manning’s case is one of eight prosecutions President Barack Obama’s administration has launched under the 1917 Espionage Act – more than under all previous US presidencies combined.