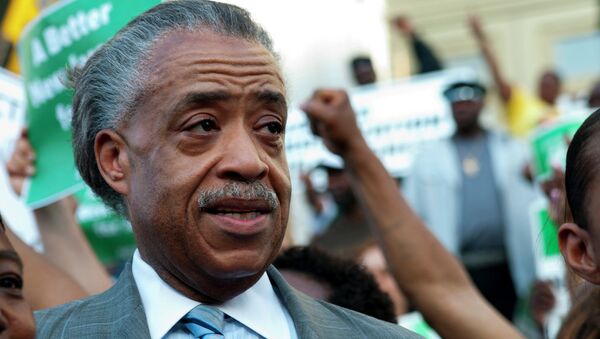 Cable giant Comcast is smacking down allegations that it paid off civil rights activist Al Sharpton to quiet complaints that Comcast wasn’t doing enough business with the African-American community.

“We will defend vigorously against the scurrilous allegations in this complaint and fully expect that the court will dismiss them,” Comcast said in a statement. “We don’t generally comment on pending litigation, but this complaint represents nothing more than a string of inflammatory, inaccurate, and unsupported allegations.”

The National Association of African-American Owned Media and the Entertainment Studios Network filed a $20 million lawsuit alleging that Comcast conspired with Sharpton to freeze out African-American contracting by contributing nearly $4 million to Sharpton’s group, the National Action Network, and giving him a show on MSNBC, PoliticsNation, that pays him $750,000 annually.

The suit not only names Sharpton and his group, but other well-known African-American civil rights organizations, including the NAACP and the National Urban League.

“Defendants intentionally agreed and conspired with each other to discriminate on the basis of race against 100% African American–owned media in connection with contracting,” says the complaint filed in federal court in California.

“Defendants NAACP, National Urban League, Al Sharpton, National Action Network, acted as co-conspirators by accepting cash payments, jobs and other favors from Comcast in exchange for their public support and approval of Comcast’s racist policies and practices in contracting for channel carriage,” says the 30-page filing.

“In exchange for these payouts and other favors, Defendants NAACP, National Urban League, Al Sharpton and his National Action Network agreed to enter into sham ‘diversity agreements’—MOUs—for the purpose of facilitating Comcast’s racial discrimination in contracting.”

As with Comcast, Sharpton’s group vehemently denies the allegations.  “National Action Network has not been served with any papers and considers this claim frivolous,” said Michael Hardy, NAN’s EVP and General Counsel. “If in fact we were to be served, we would gladly defend our relationship with any company as well as to state on the record why we found these discriminatory accusations made by said party to be less than credible and beneath the standards that we engage in,” Hardy said in a statement.

The suit comes as the Federal Communications Commission is expected to soon rule on the proposed $45 billion merger between Comcast and rival Time Warner Cable.