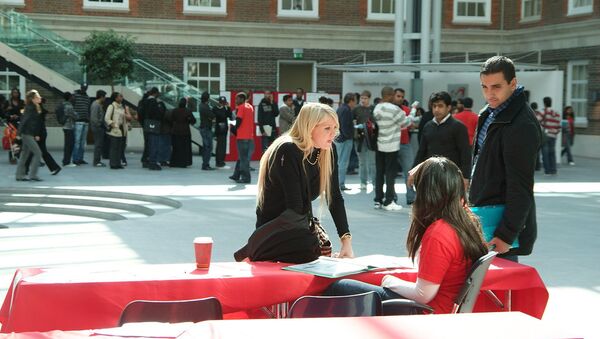 © Flickr / Gianni
Subscribe
A cross-party panel of British MPs have raised concerns over the UK's post-study work visa laws for foreign students after a report found that stricter rules implemented in 2012 have led to a reduction in the number of foreign students, with fears the UK is being overlooked as a place to study.

The All Party Parliamentary Group (APPG) on Migration published an inquiry on Tuesday looking into the impacts of the government's decision to close the Post Study Work (PSW) route in 2012, which previously allowed non-EU graduates to stay in the UK for two years after they finished studying to look for employment.

Under current regulations, non-EU graduates are only given four months to stay in the UK to find work before they must leave the country.

I agree — we need a 12 month post-study work visa. I see so many great candidates for shortage roles leaving the UK. http://t.co/jzgEfkvlfy

The report raised concerns that the more restrictive measures were leading many students to dismiss the UK as a study option and consider other countries such as Canada, Australia and the US due to their seemingly more attractive post work options.

A Loss of Talent, Loss of Money

Apart from British universities losing out in attracting top international talent, it is also feared that the UK could also suffer economically as a result of tougher restrictions, with the report citing the £10 billion that international students bring to the British economy every year.

As part recommendations in the report, MPs have suggested that additional, more flexible post study options be implemented to stop the reduction in foreign students numbers in Britain, with the report highlighting that there had been an 88 percent drop in the number of international students finding work in the UK after their graduation.

Conservative MP Richard Bacon, member of the APPG on Migration, said changes must be made to current laws to ensure the UK is an attractive location for international students.

"Higher education is one of our country's leading export success stories, increasing our soft power and helping the UK shape the world of the future. But the government's current approach to post-study work and student migration policy is jeopardising Britain's position in the global race for talent. Such a short-sighted stance is damaging to our economy and hinders the delivery of the Government's long term economic plan."

A number of prominent business leaders were also consulted in preparation of the report, with many concerned that they were being restricted from hiring talented international post graduates due to costly government red-tape.

Labour MP Paul Blomfield, fellow Chair of the APPG on Migration, said the current restrictions were having a number of negative impacts.

"The report lays bare the negative impact that closure of the former post-study work visa has had on British businesses and universities. Alternative visa routes have failed to attract talent and have actually prevented skilled graduates from contributing to the UK jobs market. There is strong cross-party agreement on the need to take action to restore our reputation as the ‘destination of choice' for international students from all countries."

The government has so far backed its tougher approach to foreign student visas, with Home Secretary Theresa May even putting forward proposals for stricter plans to send foreign students back home after the completion of their studies, where they could apply for work from outside of the UK, saying that many students were abusing current rules.

This followed the high profile case of a Kenyan PhD student at the University of London, who late last year received a letter saying that he would have to leave the country due to visa restrictions, just one hour after submitting his dissertation.

No Country for Young Academics

Don Flynn, Director of the Migrants' Rights Network, said he was pleased with recommendations put forward in the report, saying that government departments should be doing more to encourage international students to the UK, not discouraging them.

"We welcome the findings in this report. International students are important to the UK's economy and universities but they have steadily seen their rights eroded here. The Government should be particularly concerned about the steep decline in enrolments from strong growing markets such as India, while businesses continue to struggle to recruit skilled graduates. The rules need to be looked at again."