No Country for Young Academics 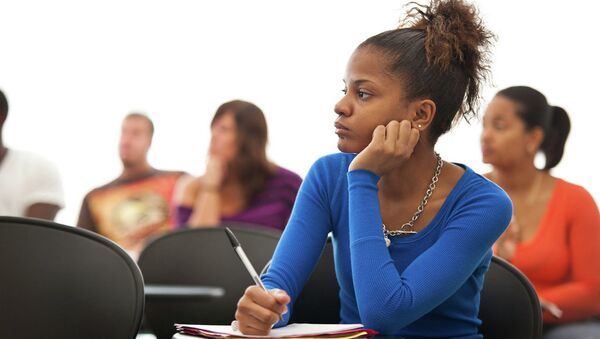 © Flickr / Jeremy Wilburn
Subscribe
The Home Secretary Theresa May has defended plans to send foreign students back home after graduation. She said the new rules were necessary because every year tens of thousands of students were staying on after their courses had finished.

At the end of last month, a Kenyan PhD student at the University of London submitted his dissertation. An hour later he received a letter from the Student Immigration & Compliance Officer at the university telling him that because he had completed his studies his Tier 4 visa would be curtailed.  He would need to leave the country.

The Kenyan student — one among the many of those affected by UK immigration rules and these will only become tougher as a result of a pledge recently made by the Home Secretary. Theresa May’s proposal that students from outside the EU leave Britain as soon as they finish their education means they will have no time to look or apply for a job.

Before 2012, international students from non-EEA countries could stay in the UK for up to 2 years after graduation. This enabled them to gain work experience. Today, they are given only 4 months after they finish their studies – the main reason being their graduation ceremony. During these months they can also look for an employer who might be able to help them secure a work visa. Theresa May, however, insists, that every student must return to their home country and apply for work in the UK from abroad.

Theresa May backs her proposals with statistics: each year 121,000 students from outside of Europe come to study in Britain, whilst 51,000 of them actually stay. In a statement given to the House of Commons, Theresa May said that if the situation is left as it is, there would be an estimated 600,000 non-EU students coming to the UK each year by 2020.

The proposal faces criticism from Labour and the LibDems. Members of both parties are concerned the policy may hurt the British economy. Sir James Dyson, a prominent inventor, shares these concerns, as he believes the measures will deprive the UK of the most talented and best-educated migrants. Last year, the Vice-Chancellor of Oxford University, Professor Andrew Hamilton noted that visa restrictions caused many top students to seek education elsewhere, as the number of overseas students in British universities has dropped for the first time in decades.

The UK may lose more than the bright and young. Research published by the Department for Business Innovation and Skills in 2011 estimated the total value of overseas trade and investment in education-related activities amounts to £14 billion, suggesting that this sum could rise as high as £26 billion by 2025. With international students having to sometimes pay three times more in tuition fees compared to their British counterparts, making higher education in Britain attractive for foreigners helps maintain capital flow.

International education is highly competitive, and other countries, while concerned with immigration, take steps to attract international students – such as the USA, which started introducing a more flexible visa policy back in 2008. This immediately sparked an increase in the number of overseas students, whilst Germany completely abolished tuition fees in 2014.

According to the German Academic Exchange Service (DAAD), the number of international students in the country has doubled: from 140,000 in 1995 to 280,000 at the beginning of the 2013 academic year — with nearly 95,000 of these students coming from outside the EU. And that's not all — the German government, wishing to attract the international academic elite, by 2020 intends to increase the number of overseas students by 350,000 – quite the reverse of what is happening in the UK.

But despite all that, the Home Secretary seems to believe that the social group who has enough money and ambition to pursue higher education in one of the most renowned and expensive systems in the world is the one that is the most willing to get on the dole – and this prompts Theresa May to purposefully lose the key to those doors international students could open in order to help the British economy.