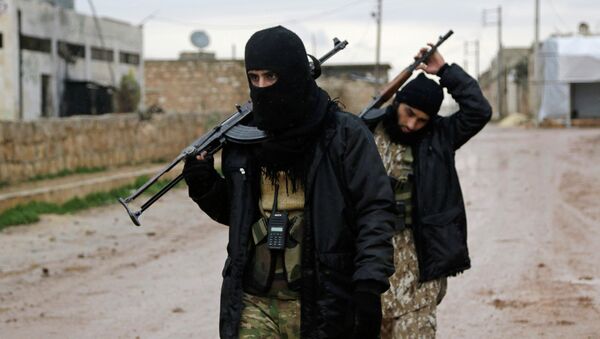 © REUTERS / Hosam Katan
Subscribe
International
India
Africa
Amid reports that the US and Turkey were planning to aid Syrian opposition fighters, the two countries have now formally signed an agreement to provide both training and equipment to rebels fighting both the Syrian government and the self-proclaimed Islamic State.

According to a Turkish foreign ministry official speaking to Reuters, the deal has been signed on Thursday.

It was signed by Ambassador of the United States to Turkey John Bass and Turkish Deputy Foreign Ministry Feridun Sinirlioglu.

A document on train-and-equip has been signed by Undersecretary HE Sinirlioğlu and US Amb. Bass pic.twitter.com/TWEgHqZ3x1

The US military has said it is sending over 400 troops to train so-called "moderate" rebels (members of the Free Syrian Army) just outside of the country's borders. Saudi Arabia and Qatar also might host training sites alongside with Turkey.  According to the plan, some 5,000 Syrian fighters should be trained each year for three years.

The Wall Street Journal reported that under the plan the US considers not only supplying Syrian opposition fighters with machine gun-equipped pick-up trucks, but also might grant them powers to call in US-led coalition airstrikes.

Several US officials have expressed concern over arming the Syrian rebels, including former Syrian ambassador Robert Ford. He cites the fact that the US can't be sure that the Syrian opposition is entirely opposed to al-Qaeda associates in the area, and that the rebels lack cohesiveness and may be quickly moving toward losing the Syrian civil war.

At the same time as signing an agreement with Washington on training Syrian rebels, Turkey is also considering a $3.4 billion defense deal with China, despite concerns from Turkey's NATO allies. This deal would install a new missile defense system which would operate separate from existing NATO infrastructure, raising Western security concerns.

"The system in question will be integrated with the national system for Turkey's defense and will be used without integrating with NATO," Defense Minister Ismet Yilmaz said in a written statement.

If approved, that deal will go through China Precision Machinery Import and Export Co., a company which the US has already suspected of selling sensitive technologies to Iran and North Korea, as well as Syria.