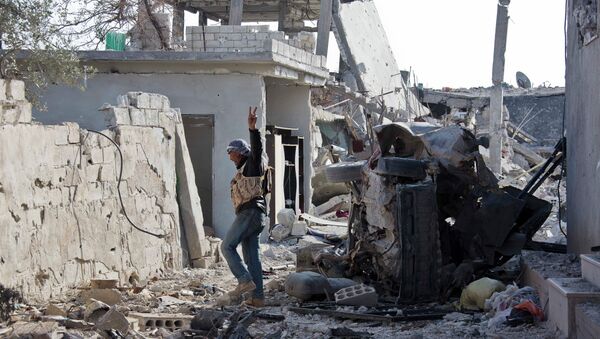 Syrian rebels suffering heavy losses in the bloody civil war, might be given power to call in US airstrikes, according to a report in the Wall Street Journal.

As it grapples with ways to handle the self-proclaimed Islamic State, the US has reached a deal with Turkey to provide so-called “moderate” Syrian rebels with military aid. But many – including the former US ambassador to Syria – have serious doubts, and point out that the arming of rebels hasn’t worked out so well in the past.

“Negotiations have been concluded and an agreement text will be signed with the US regarding the training of the Free Syrian Army in the coming period,” Tanju Bilgic, Turkish foreign ministry spokesman, told Reuters.

The US plans to train nearly 5,000 Syrian fighters a year.

In addition to training, the Pentagon will provide pick-up trucks outfitted with machine gun, as

well as hand-held radios. These radios will allow rebel commanders to call in US airstrikes against targets on the ground.

It’s all part of a deal to help resistance fighters battling against the government of Syrian President Bashar al-Assad and the growing influence of the Islamic State, and it’s a strategy that saw some degree of success in Kobane last month. The YPG, a Kurdish guerilla group – which the United States classifies as a terrorist group – was allowed to identify targets for US bombers.

Strange bedfellows, indeed, and many critics point out the dangers of arming groups that may be deemed “moderate” today, but could become “extremist” tomorrow. In the multi-pronged, complicated fight that is the Syrian civil war, alliances can change unpredictably.

One such critic is Robert Ford, the former US ambassador to Syria. Once a strong supporter of arming Syrian rebels, he has since become one of the idea’s chief opponents. He points out that the Syrian opposition is a fractured lot, and one that doesn’t necessarily share American views on who, exactly, is the enemy.

“It becomes impossible to field an effective opposition when no one even agrees who or what is the enemy,” Ford said, according to McClatchy.

He notes that Syrian rebels may not view al Nusra Front as an enemy, and US equipment could end up in the hands of the terrorist group which pledged its allegiance to al-Qaeda.

“Nusra Front is just as dangerous, and yet they keep pretending they’re nice guys, they’re Syrians,” Ford said. “For a long time, we have looked the other way while the Nusra Front and armed groups on the ground, some of whom are getting help from us, have coordinated in military operations against the regime.”

Ford also believes that the opposition has grown too small to prove effective, and may be on a downward slide toward defeat.

Syria Willing to Halt Bombing of Aleppo for Six Weeks

The US has a long history of providing rebels with arms which were used in ways that were not entirely intended. In Afghanistan, an airstrike in 2008, which killed 5 civilians, was conducted based on faulty intel by tribal leaders on the ground, who manipulated US bombers into attacking their rivals.

If Syrian militias are given the power to call in airstrikes, there’s no guarantee that they are not going to use US airpower in the same way: to get rid of their tribal competitors instead of fighting terrorists from the Islamic State or al-Nusra.