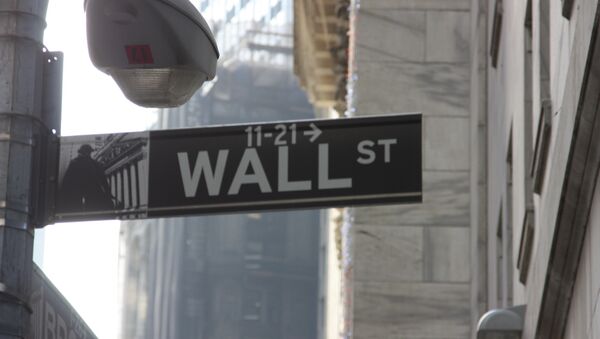 Equities rallied worldwide on the expectation of more central bank action in the Eurozone and China, while commodities slid, dragging mineral resources-based economies down further.

MOSCOW, December 3 (Sputnik) — Global shares have risen today and the euro plunged to its two-year low on the anticipation of tomorrow’s European Central Bank’s (ECB) meeting on monetary policy, while Asia-Pacific trades ended higher on the expected monetary easing in China.

Global Markets Surge on Energy Rebound, EU Edges to Deflation
The recently published weak Eurozone macroeconomic data has prompted investors to expect more stimulus from the ECB, which will be announced, if decided upon, after tomorrow’s policy meeting. However, stock markets in the UK, Germany and France went down with FTSE 100 losing 0.18%, DAX going flat and CAC40 losing 0.20%, according to the data by Reuters. Markets in Europe are feverish as no one can predict the immediate effects of the tomorrow’s ECB decision.

“Everyone wants Draghi (Mario Draghi, ECB head) to leave the option for QE out in the open,” said Carsten Hilck, managing $4 bln worth of assets for the Frankfurt-based Union Investment Privatfonds GmbH. “He just has to show the gun, but not yet use it. Money is flowing back into European stocks, markets are near their highs, bond yields are going down – everything is back on track now.”The Eurozone has accelerated on monetary easing in Japan and China this past October, as Draghi announced a possibility for the expansion of the ECB bond-buying program, similar to what the US Fed was doing in 2008-2014.

Hong Kong-Shanghai Stock Connection Opens Money Flow to Mainland
The CSI 300 Index of the largest Shanghai and Shenzhen-listed enterprises added 1.5%, according to Bloomberg data, Shanghai composites edged 0.6% up. International investment money influx via the Hong Kong-Shanghai Stock Connect amounted at 3.86 blm renminbi ($627.55 mln), far below the daily quote of 13 bln renminbi ($2.113 bln). Hong Kong’s Hang Seng Index fell by 0.95%, continuing its losing streak since the Stock Connect opening as investment money flows into the mainland on the hopes of higher returns in light of the looming easing.

The world’s largest economy is speculating on the possible interest hike ahead of the Federal Reserve’ policy meeting on December 16-17, while the upcoming November data will likely show slower growth in employment. The Dow Jones added 0.58% the previous day, S&P 500 rose 0.64%, NASDAQ added 0.60%, with most gains in construction sector.

US-Saudi Oil Price War Takes Toll on Nigeria
Oil slid 0.21% to $70.39 per barrel of Brent, while futures on the American brend of WTI crude with delivery on 15 January rose by 0.12% to 66.96 a barrel. Commodities are down generally, leveraging pressure on mineral resources-backed currencies. The dollar today touched its highest since 2009 against a basket of six currencies.

In Russia, business activity in services sector contracted to the worse-than-expected Purchasing Managers’ Index (PMI) of 44.5, where above 50 indicates growth. Coupled with the depreciating national currency, which recently fell by about 16% in six days, and low oil prices, Russia’s economy is heading for a recession in 2015, as acknowledged by the nation’s Economy Ministry, according to a Bloomberg report.

Russia's Central Bank Allows Ruble to Float Free
The ruble added 1% to 53.32 for $1 on the Central Bank interventions. “They’re intervening in order to show that they’re monitoring the situation and won’t let the ruble go out of control,” Evgeny Shilenkov of the Moscow-based Veles Capital LLC told Bloomberg. “Conceptually, nothing has changed and the ruble will continue falling on oil and the economy.”

Growth in Australia also slowed due to the slump in commodities. The nation’s government is trying to tighten its fiscal policy cut cutting spending and hiking taxes. “We have seen a dramatic fall in commodity prices, which has obviously had an impact on the Australian economy, had an impact on our nation’s income,” Australia’s Treasurer Joe Hockey said Canberra today as reported by Bloomberg.