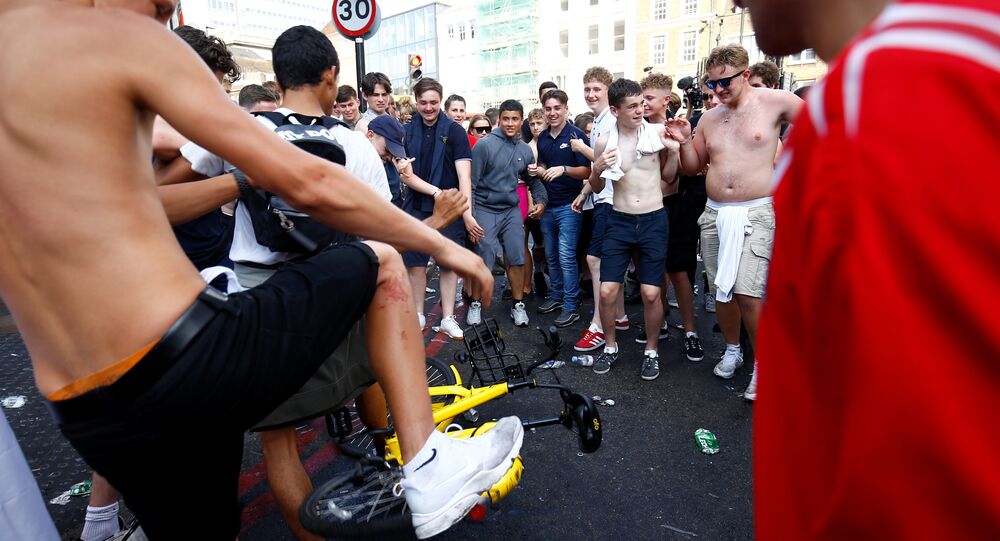 Reports of brawls following England’s win have been flooding the net, with images of trashed pubs, disrespectful Ikea customers, and ambulances being used as trampolines. That’s in England- but how are they holding up in Russia?

This World Cup tournament has remained largely incident free, but there are still a fair few fans that insist on tarnishing the reputation of their home nation. At the Colombia vs England match last Tuesday, the cracks in England’s good behaviour started to seep.

Heartrates inside the stadium were lifted as the teams commenced a penalty shootout that crowned England the winner of the match. Adrenalin remained on high, long after the game. One group of England fans, unfortunately, could not contain this onset of emotion, and decided to demonstrate the fragility of the line that stands between celebration and destruction.

The incident occurred on the busiest line of the Moscow metro, after the Last-16 match in the Spartak stadium. Onlookers caught the moment a group of rowdy England fans provoked a scuffle with Colombian fans on the metro. Chants of ‘Footballs Coming Home’ could be heard, before police boarded the train to detain the disrupters.

Discussing the incident, Russia fan Dima Kosaryov, notes how ‘England’s chants are popular at the tournament, but they are a bit provocative.’ He thinks that the aggressive chanting is not in the spirit of winning and could stir up violence between the fan sets- ‘England fans are the most likely to be singing, and they have the most songs’. Post-incident, two Colombian men and one England fan were booked by police. The Colombian’s have since been released, while the remaining England fan will have his Fan-ID confiscated. We don’t know what the England team have in store, but this England fan will certainly be going home.

On the same day, Rufus Hall, a 20-year-old University Student with ties to the Royals, was fined £35 for defacing a statue outside the Spartak Stadium. The culprit later released a televised apology posted by Russian police, but the act has drawn up wide criticism. The statue was erected in honour of the late Fyodor Cherenkov, one of Spartak Moscow’s best scorers before his death at the age of 55. It is no wonder that Hall caused some controversy for writing ‘ENGLAND’ on the statues bronze lapel.

Will #England be going 'all the way'? Today in #Samara, the saga continues. pic.twitter.com/J5eF9FTSMm

Despite these incidents, the level of violence in no way matches the levels anticipated by the British press before the tournament. Headlines had promised ‘blood baths’, ‘unprecedented waves of violence’ and ‘plagues of organised violence’. Marcus Heller from Leeds, believes that the low level of trouble is all down to the cost of travelling to the World Cup.

‘Let’s face it, it’s not cheap to get to World Cup. I’ll have spent about six-grand by the end of the tournament, and flights alone are around five hundred pounds. What it means is that, no offence, but the ‘rabble’ is not here. Everyone I’m here with has a high paying job, they can afford to take time off- but they also have more to lose. I think this is the reason the Brit’s won’t be violent in Russia. The ones that are here are not the violent type. Maybe they used to be, but now they are older, wiser, and more respectful.’

The violence that shrouded the 2016 European tournament, was, as Marcus states, not a symptom of British fans being violent, but a subset of British fans, open to violence. Of course, it takes two to start a fight, but Marcus believes the location of the tournament impacted who travelled out, and what they travelled for.

“The Euros were much cheaper, closer. You could fly out for the weekend with fifty quid in your pocket and be open for a bit of trouble. Here, we are much further from home, we are on Russian soil. Most of us are not stupid, and we have a reputation to upkeep.”

All aboard the tipsy train to #SWEENG in #Samara pic.twitter.com/fREQPzOutX

Barney Olson from Birmingham agrees, but he’s worried that all that might change as England advances through the championship. With England proving so successful in the tournament, more fans from England are forking out for a chance to cheer their team into the Semi’s. It is, Olson says: ‘A once in a lifetime experience and seeing England win is ultimately priceless’.

‘I know people taking out loans to get here, they’re coming just for the weekend, they’re already hyped up. You’ve seen the scenes in England- they go mad when England win. I just don’t want that to happen here.’

Losing badly is one thing — winning badly is a whole other kettle of fish. Anyone flying out from England for a slice of the showdown, might want to be careful not to sour a sweet-tasting tournament.