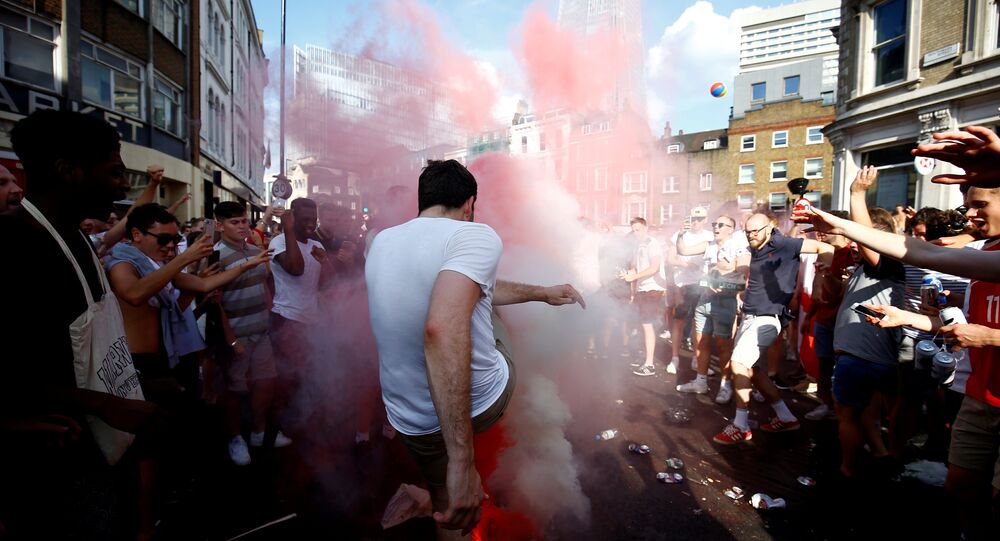 As the Three Lions roar into the 2018 World Cup semifinals, some England fans are walking down the road of glory exhibiting chants, brawls, destruction and other attributes typical of football hooliganism.

A video was posted on the internet on Sunday, showing hardcore fans celebrating England's World Cup 2-0 quarterfinal victory over Sweden in an unconventional way: shirtless, climbing on top of a taxi, smashing its roof, while being cheered on by a crowd of hooligans.

Dear twitter…… watch this video, retweet it and help police find this disrespectful embarrassment to this country! pic.twitter.com/oqLGDeSUxj

The shocking footage is yet another chord in the glorious hymn of England's supporters at the tournament. Sputnik has come up with a selection of the country's most notorious celebrations, which sometimes even turn into something bigger than a regular manifestation of joy.

After England's win over Sweden, fans were filmed causing mayhem in a London-based Ikea store that sells Swedish furniture.

When England fans take over an Ikea store…

England fans smashed up an ambulance vehicle in south London after beating Sweden.

Another video on Twitter shows noisy fans in Spain's Benidorm.

Apparently England fans have a natural predisposition to climb onto the roofs of buses and bus stops.

Upset fans in Bristol throwing stuff at each other after a 1-0 loss to Belgium in the group stage.

On Wednesday, England will face Croatia in a clash to secure a place in the World Cup final.