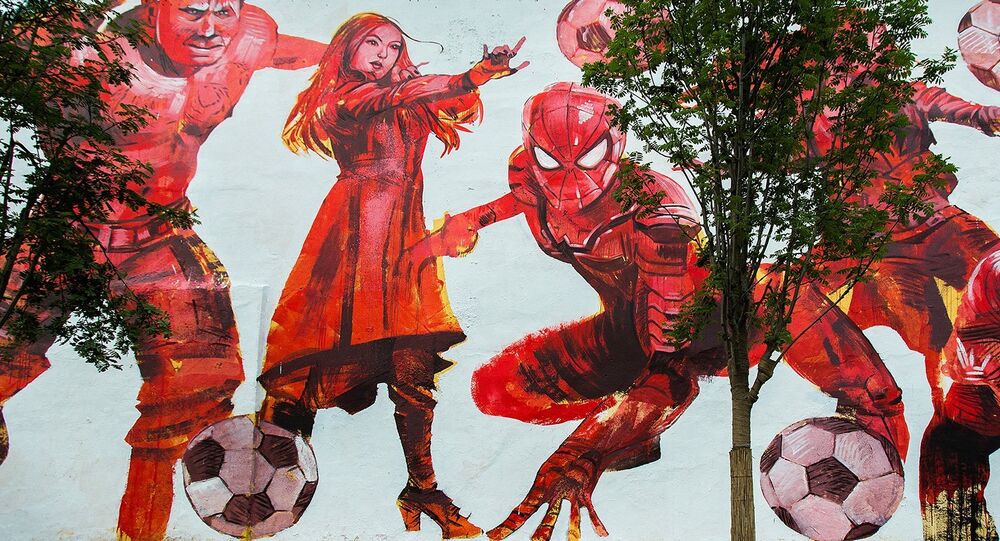 Themed graffiti dedicated to the World Cup 2018 can be seen on the facades of two houses in the center of Moscow.

Graffiti dedicated to the upcoming FIFA World Cup in Russia has started appearing on residential buildings across Moscow.

On the office building located on Solzhenitsyna Street, superheroes from the popular movie the Avengers have been drawn.

In the picture there is Iron Man, Spider-Man, Captain America, Wonder Woman and other characters all playing with footballs.

© Photo : Mayor and Government of Moscow press service
Graffiti devoted to the FIFA World Cup — 2018
Graffiti eight meters in height is located on the wall, which faces Taganskaya Square.

In addition, another gorgeous graffiti has been drawn on an apartment building on Marshal Zhukov Avenue. The illustration depicts a teenager in a pose ready to throw a ball onto the playing field.

"Street art using bright red color are created with the help of aerosol paint. Their author is Argentinean artist Martin Ron, whose works are known far beyond his native country, "Ivan Panteleev, the project's organizer, said.

Martin Ron is one of the top ten world artist working in the genre of street art.

Graffiti for the World Cup is being drawn as part of the festival of street art called MOST, which is being held in Moscow until mid-June.

During this time, the artists plan to create two more street canvases. One graffiti image will appear in the southwest, in the Konkovo area, the other in the southeast of the capital, however, the exact location has not yet been selected.