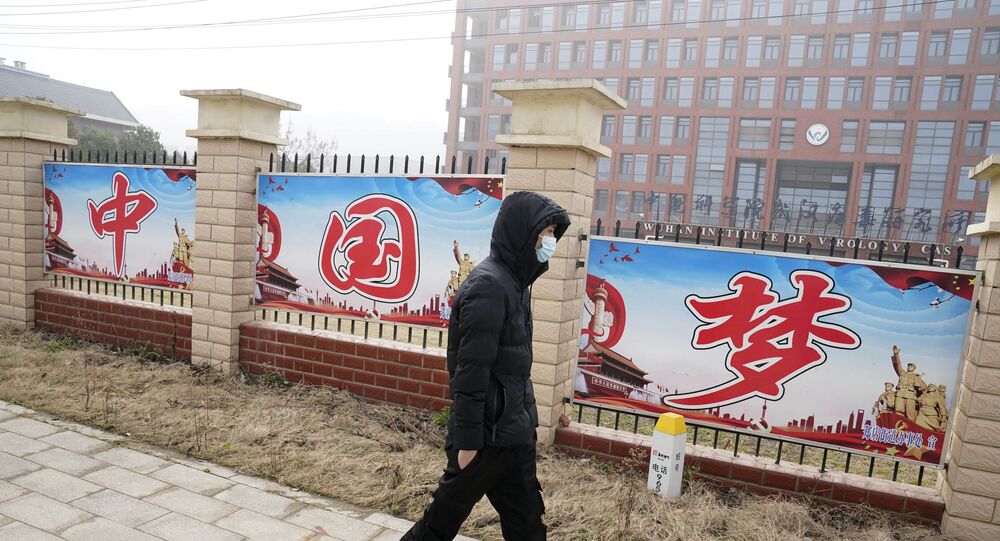 In March, the World Health Organisation claimed in a report that it is "extremely unlikely" the coronavirus escaped from a Wuhan research lab.

World Health Organisation (WHO) Director-General Tedros Adhanom Ghebreyesus has admitted that it is too early to exclude a possible link between the COVID-19 pandemic and a laboratory leak of the virus.

He told reporters on Friday that his organisation is "asking actually China to be transparent, open and cooperate, especially on the information, raw data that we asked for at the early days of the pandemic".

Ghebreyesus referred to it being a "premature push" to rule out the theory that the coronavirus might have escaped from a bio lab at China's Wuhan Institute of Virology, despite the WHO having described such a theory as unlikely in its previous probe.

© AFP 2021 / How Hwee Young
Director General of the World Health Organization (WHO) Tedros Adhanom Ghebreyesus meets with China's Premier Li Keqiang (not in photo) during a meeting at the Zhongnanhai Leadership Compound in Beijing, Friday, Aug. 18 2017

"I'm an immunologist, and I have worked in the lab, and lab accidents happen. It's common", the WHO director-general stressed.

He said the UN health agency is now laying the ground for new probes into the origins of COVID-19, voicing hope that "there will be better cooperation to get to the bottom of what happened".

"We need information, direct information on what the situation of this [Wuhan] lab was before and at the start of the pandemic. If we get full information, we can exclude [the lab theory]", Ghebreyesus said, pointing out that China's collaboration on the issue is critical.

He spoke after President Joe Biden in late May gave the US intelligence community 90 days to produce a report re-examining the origins of the coronavirus and determining whether the disease leaked from a lab or spread from an infected animal to a human.

Chinese Foreign Ministry spokesperson Zhao Lijian quickly reacted to the president's move by saying that "the origin of the virus is a difficult scientific question" and that the US "is currently trying to let the intelligence services draw scientific conclusions".

"This only suggests that the US is not interested to find out the truth, it does not want any scientific research, this is just a political game, an attempt to throw the blame on others and throw off their responsibility", Zhao argued.

© AP Photo / Dake Kang
'Political Game': China Slams Biden's Bid to Publish Report on COVID-19 Origins
Earlier in May, a Wall Street Journal report suggested, citing intelligence data, that three laboratory employees in Wuhan became sick in November 2019 with symptoms similar to those caused by the virus. According to the newspaper, this may be a sign that the coronavirus originated in a laboratory.

This was preceded by the release of a WHO report in late March that argued it's "extremely unlikely" the coronavirus escaped from a Wuhan research lab. At the same time, the report also failed to prove that COVID-19 can be transmitted from animals to humans, something that until now was the prevailing thesis.