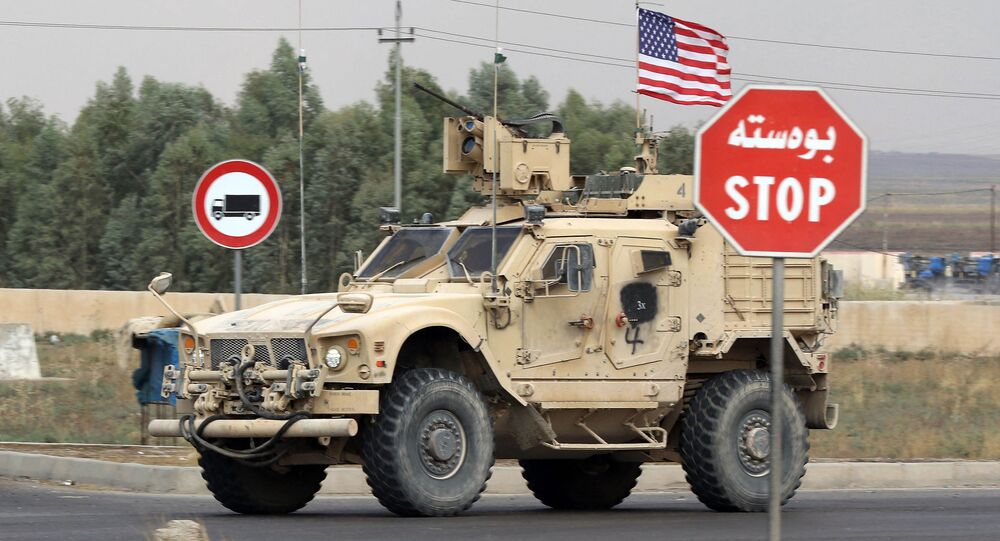 WASHINGTON (Sputnik) - The United States does not appear to have a legitimate basis in either domestic or international law to justify the recent airstrikes in Iraq and Syria, which means the attacks could be seen as acts of aggression that violated the sovereignty of both countries, legal experts told Sputnik.

On Sunday, the Pentagon announced that US military aircraft targeted the facilities of two Iranian-backed militias - Kata'ib Hezbollah and Kata’ib Sayyid al-Shuhada - in the Syria-Iraq border region, claiming it was a retaliatory attack.

Exchanges between the two sides continued into Monday, with US military forces in Syria targeted by multiple rocket attacks. US-led coalition spokesperson Wayne Marotto said the US returned fire with artillery but suffered no casualties.

The strikes represent the second time Biden, as US president, has ordered attacks against militia in the region allegedly linked to Iran. In February, the United States launched airstrikes against Iranian-backed Iraqi militia in eastern Syria. Biden justified the February strikes on Article 51 of the UN Charter - which stipulates that all nations have an "inherent" right to self-defence.

"Like the airstrikes in Syria that Joe Biden ordered in February, the latest US airstrikes in Iraq and Syria against 'Iranian-backed militia' violated the United Nations Charter", Thomas Jefferson School of Law Professor Emerita and former National Lawyers Guild President Marjorie Cohn told Sputnik. "These airstrikes violated the sovereignty of Iraq and Syria and constituted illegal acts of aggression in violation of international law".

Neither Iraq nor Syria nor Iran had mounted an armed attack against the United States or another UN country, Cohn pointed out.

"So the United States cannot lawfully claim it acted in self-defence under Article 51 of the [UN] Charter", she said.

University of Illinois Law School Professor of International Law Francis Boyle added that the move also violated the US War Powers Clause as well as other international laws.

"Biden's self-defence argument is nonsense", Boyle said. "Their justification is a mish-mash of excuses… It [the attack] is clearly illegal".

Moreover, Boyle underscored, the United States lacks any legal basis to be in or carry out operations in Iraq or Syria in the first place.

Although President Donald Trump was applauded by many for pulling US forces out of Syria, he left some troops behind to guard the oil and also ordered the assassination of Iranian Quds Force commander Qasem Soleimani.

Boyle suggested Biden's latest actions showed that he was following almost the very same policies as Trump had with no regard for international law.

"Biden and the Bidenites are just following the Trump policies. I detect no difference there", he said. "Trump made it clear that we [US] were in Syria to steal the oil and control the oil fields."

And in Iraq, Boyle recollected, the US refused to leave even after the parliament demanded over the Soleimani strike.

© REUTERS / AZIZ TAHER
A member of Lebanon's Hezbollah holds a Lebanese flag as he stands in front of a picture depicting senior Iranian military commander General Qassem Soleimani and Iraqi militia commander Abu Mahdi al-Muhandis who were killed in a U.S. attack, during a ceremony marking the first anniversary of their killing, in the southern village of Khiam, Lebanon January 3, 2021. REUTERS/Aziz Taher

However, Boyle said that Biden was worse than his predecessor in terms of violating war laws in one respect: Trump was not a lawyer.

In fact, Boyle said Biden's entire cabinet and inner circle were well aware of this reality.

"They [Biden administration officials] have all acted in knowing and open and impeachable defiance of International Law and the United States Constitution", Boyle concluded.