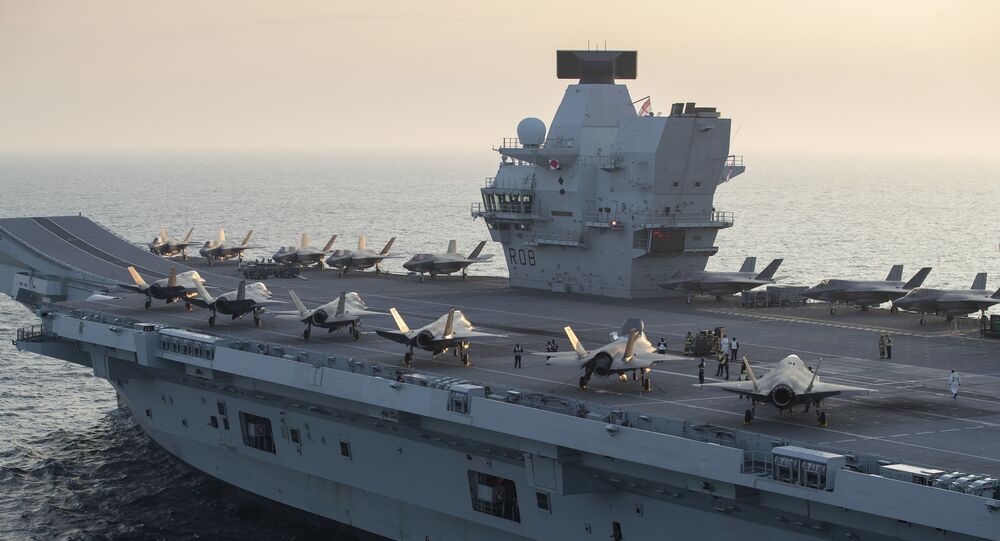 Wednesday’s incident in the Black Sea, which saw a Royal Navy destroyer sailing into the Russian territorial waters of Crimea, only to be met with a barrage of warning fire by a Russian warship and aircraft, further worsened already-icy relations between Moscow and London.

Ships from the Russian Navy’s permanent formation in the Mediterranean Sea will be conducting missile drills as little as 30 km away from the HMS Queen Elizabeth, the Royal Navy’s fleet flagship, according to a notice to airmen (NOTAM).

According to the notice, the Russian warships’ manoeuvres will take place later Saturday. The Royal Navy carrier group led by the HMS Queen Elizabeth is currently stationed  south of Cyprus, and is expected to remain there until 30 June.

Earlier this week, the Russian Defence Ministry announced joint naval and aerospace forces drills kicking off on Friday in the eastern Mediterranean, with five warships, two submarines, Tu-22M3 strategic/maritime strike bombers and hypersonic missile-capable MiG-31Ks taking part. The MoD confirmed Friday that two MiG-31Ks had arrived in Russia’s Khmeimim Air Base in Syria ahead of the drills.

Video of joint Russian Navy and Aerospace Forces training in the Mediterranean Sea.

The HMS Queen Elizabeth set sail to the Mediterranean last month as part of its maiden operational deployment, intended to demonstrate Prime Minister Johnson’s commitment to the concept of “Global Britain,” and to restore the Royal Navy’s image as Europe’s ‘most formidable naval power’. While in the Med, the carrier has used Britain’s new US-bought F-35 jets to carry out strikes in Iraq against Daesh (ISIS).* The British MoD confirmed this week that strike missions had been flown. US airmen and F-35Bs are also stationed aboard the carrier, and were also used to carry out strikes, with their operational deployment being the first of its kind since World War II.

“We’re rubbing up against Russian activity, not in a you know, in a dangerous or aggressive manner, but you’ve just got other people out here playing in what is a fixed piece of water and airspace,” Moorhouse said, adding that a Russian warship had come within 10 km of the carrier on one occasion.

The Russian Mediterranean drills come in the wake of Wednesday’s incident in the Black Sea involving the HMS Defender destroyer, during which the ship sailed two nautical miles into Russian territorial waters off Crimea and ignored repeated Russian military and FSB border guard warnings to leave, prompting a Russian ship and military aircraft to fire warning shots.

© AFP 2021 / VIKTOR DRACHEV
Russian Military Warns US, UK Not to 'Tempt Fate in Black Sea', Calls HMS Defender 'Fat Target' for Russian Missiles
London initially dismissed Russia’s claims about the warning fire, suggesting its warship was merely conducting an “innocent passage through Ukrainian territorial waters,” and chalking down Russian firing nearby to a “gunnery exercise.” A BBC journalist onboard the HMS Defender challenged the government’s story, saying he did hear firing and that he saw Russian aircraft zipping overhead. Later in the week, the Russian military released footage of the incident.

On Thursday, government sources told The Telegraph that the HMS Defender’s sail into Russian waters was a preplanned operation concocted by Defence Secretary Ben Wallace, with Foreign Secretary Dominic Raab reportedly expressing opposition to the idea but Prime Minister Johnson squashing debate and approving it on Monday.

On Friday, Gen. Nick Carter, the chief of Britain’s defence staff, warned that incidents like the one involving the British destroyer in the Black Sea could accidentally lead Russia and the UK into a state of war, saying the risk of “miscalculations” in such incidents keeps him “awake in bed at night.”