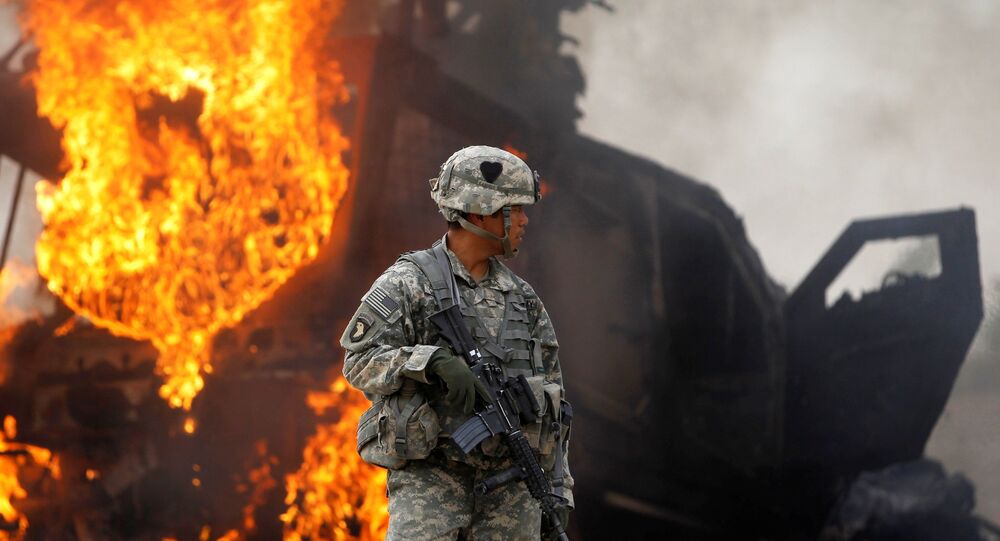 The US, which arrived in Afghanistan in 2001 following the 11 September terrorist attacks, in April announced a withdrawal of troops, to be completed by the 20th anniversary of the 9/11 attacks. However, as it hands over its military bases to Kabul's forces, the Taliban is already taking over some of the now-unguarded districts and provinces.

The government of Afghanistan, led by President Ashraf Ghani, could collapse between six to 12 months after the US completes its military withdrawal from the country, according to a revised assessment from the American intelligence community, cited by The Wall Street Journal.

Some officials cited by the outlet offered an even more dismal prognosis, suggesting the government could hold out for no more than three months against a buoyed Taliban.

The new estimate is in stark contrast to a previous, more optimistic analysis of the situation that claimed Afghanistan’s government could hold its own for as long as two years after the American troops leave.

The US has already removed more than half of its 3,500 troops from the region, with the remainder scheduled to leave by the 11 September deadline set by President Joe Biden in April.

As Defense Secretary Lloyd Austin testified during a Senate Appropriations Committee hearing on Thursday to say there’s “medium” risk with extremist groups taking over Afghanistan within two years of US troop pullout, some lawmakers signaled they were upset with Washington's decision.

Read statement from @RamizAlakbarov strongly condemning yesterday's heinous attack on @TheHALOTrust in Baghlan, northern Afghanistan.
Heartfelt condolences to the families of the deceased and wishes for a speedy and full recovery to the injured.https://t.co/XnDnl59JKI pic.twitter.com/U9t6hSR04R

Sen. Lindsey Graham (R-S.C.) said that “there are no great options” regarding the situation in Afghanistan, but criticized the move by Biden to leave completely.

"President Biden, unfortunately, has chosen the highest risk option available, which is to leave no matter what," Graham said.

The Taliban* has been seizing ground as the US hands over its military bases to Kabul's forces.

The insurgents have already reportedly taken over some of the now-unguarded districts and provinces, with the Afghan security forces so far unable to stop their advance and often surrendering without a fight, leaving behind the Humvees and other US-supplied equipment.

“Most districts that have been taken surround provincial capitals, suggesting that the Taliban are positioning themselves to try and take these capitals once foreign forces are fully withdrawn,” Deborah Lyons, special representative and head of the United Nations Assistance Mission in Afghanistan (UNAMA) was cited as saying at a UN Security Council meeting in New York on Tuesday.

The “manifest victory and triumph” was touted by Taliban in a statement on Wednesday, writes the outlet, as the group vowed their territorial gains “will be the beginning of the end of the ills birthed by occupation.”

Some local politicians and tribal elders are reported to have struck surrender agreements with government forces, who are often unpaid for months.

While Afghan authorities said government security forces had pushed back Taliban from several districts in northern and northeastern provinces of Balkh, Baghlan and Kunduz, killing dozens of insurgents, Taliban spokesman Zabihullah Mujahid disputed the claims, going on Twitter to say his group retained control of all the recently captured districts.

#AlFath
Enemy troops based in Academy of Abadan Dasht that refused to surrender & tried to flee in a convoy were engaged by Mujahidin close to #Kunduz capital resulting in 30 troopers killed, 45 wounded & 54 detained, weapons & equipment seized by Mujahidin. https://t.co/FW2mqDilIu

In light of the Taliban’s onslaught, White House officials, according to the publication, are encouraging the military to slow the pace of the troop withdrawal.

As Pentagon press secretary John Kirby on Tuesday reiterated plans to withdraw all troops, other than the ones left to “protect the diplomatic presence,” by 11 September, he confirmed the department’s intention to “maintain the flexibility” to alter the pace, scope or scale of the withdrawal depending on the “dynamic situation”.

Earlier, the White House announced that President Biden would host Afghan President Ashraf Ghani on Friday to emphasize the "enduring partnership" between the two countries.

The United States entered Afghanistan in 2001 following the 11 September terrorist attacks, becoming thus mired in what effectively became the longest military engagement in the country's history.

In a follow-up to a previous mission, the International Security Assistance Force mission, completed in December 2014, in 2015 NATO launched Resolute Support Mission in the country.

In February 2020, the Trump administration signed a deal with the Taliban* for the withdrawal of all American and NATO troops from the country in exchange for a pledge from the movement not to allow al-Qaeda* terrorists to operate in areas under the group's control.

While the original plan presupposed complete pullout by 1 May 2021, US President Joe Biden extended this deadline to 11 September 2021.