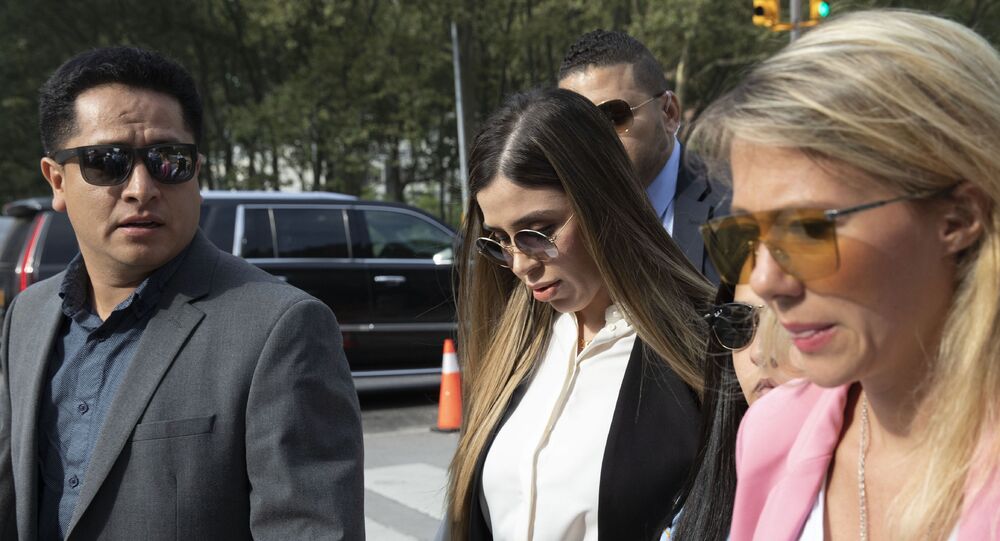 Joaquin 'El Chapo' Guzman, the former leader of the Sinaloa Cartel, is currently serving a life sentence in the United States for drug trafficking and other charges related to this shady business.

Aispuro, who reportedly married the 49-year-old kingpin on her 18th birthday, appeared in Federal District Court in Washington on Thursday morning to plead guilty to three federal charges as a part of her plea deal with prosecutors.

"Yes,'' El Chapo’s wife – wearing a green jail uniform – said through a translator when the judge asked if she committed the crimes levelled against her.

The charges against Auspuro included: conspiracy to distribute heroin, cocaine, marijuana, and methamphetamine, money-laundering conspiracy, and engagement in transactions with foreign traffickers.

According to prosecutors, Aispuro "worked closely with the command-and-control structure" of the Sinaloa cartel that was smuggling drugs to the US during El Chapo's 25 year-reign.

© AP Photo
This photo provided by the Alexandria Adult Detention Center shows Emma Coronel Aispuro. The Justice Department says Emma Coronel Aispuro was arrested at Dulles International Airport on Monday, Feb. 22, 2021 and is expected to appear in federal court in Washington on Tuesday

Prosecutor Anthony Nardozzi said that the drug lord's wife helped to import over 450,000 kg of cocaine, 90,000 kg of marijuana, 90,000 kg of heroin, and 45,000 kg of methamphetamine to the US. He also maintained that she "served as a go-between" to deliver messages from Guzman to cartel members when he was in Mexican prison, and helped to "coordinate" his prison escape in 2015.

Aispuro, 31, was arrested in February at Dulles Airport and charged with helping her husband to run his drug empire while he was on the run from the Mexican authorities.

El Chapo, who escaped Mexican prisons twice in his life (the first one in 2001), was finally re-arrested in 2016 and extradited to the US where he was found guilty of numerous offences related to running the Sinaloa Cartel, and sentenced to life in prison.