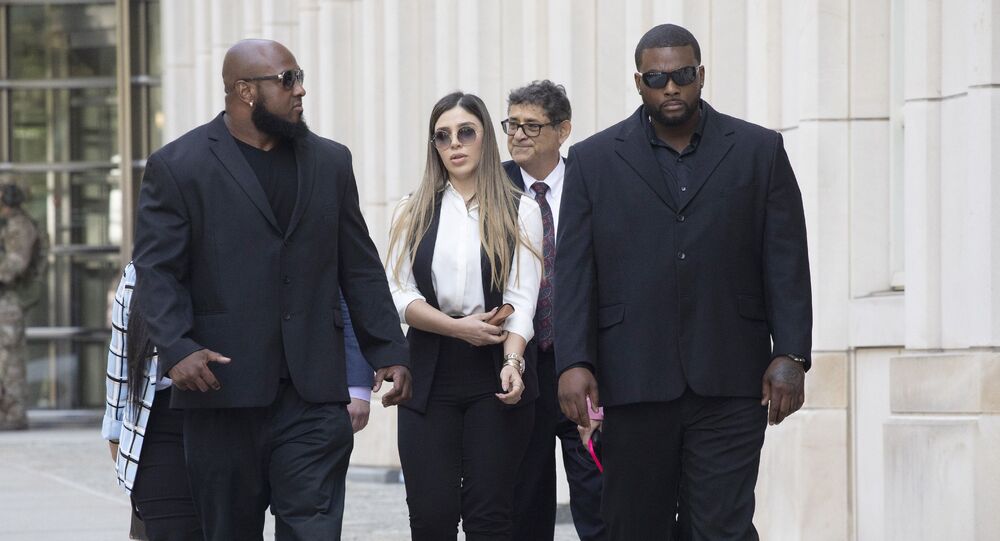 Emma Coronel Aispuro, the wife of the notorious Joaquin El Chapo Guzman, will enter a guilty plea this week to allegations of assisting her husband in running his multibillion-dollar business and then escaping from a high-security Mexican prison following one of his arrests, The New York Times reported, citing a source close to the case.

31-year-old Aispuro is reportedly scheduled to appear in Federal District Court in Washington on Thursday morning to submit her plea.

After an almost two-year investigation by US law enforcement officials into her role as an accomplice to her husband, Joaquin Guzman Loera, she was apprehended in February at Dulles International Airport near Washington.

When Aispuro, who is a dual US-Mexican citizen, was brought into custody by the FBI, there was a lot of conjecture about whether she would "rat out" her husband's pals, relatives, and business associates in exchange for a lower sentence.

However, according to a source, her plea agreement with Washington prosecutors does not obligate her to cooperate with US officials. According to the newspaper, the case of Aispuro is unusual since US law enforcement agencies tend not to prosecute the wives of drug lords, but Aispuro is a former beauty queen from a family with a reportedly long history in the drug business.

At her husband's trial, prosecutors reportedly presented strong evidence that she, like many of his mistresses, was directly involved in illicit activities, frequently assisting him in sending messages to her own father, Ines Coronel Barreras, who served as one of El Chapo's top lieutenants before his arrest in Mexico in 2013.

According to the report, citing case details, Aispuro was closely involved in helping El Chapo elude capture by American and Mexican authorities following a failed raid in the Mexican resort town of Cabo San Lucas in 2012.

El Chapo reportedly wrote to her in some of his communications, telling how he had escaped from his seaside villa just as the raiding group broke through the door of a neighboring property.

© REUTERS / Brendan McDermid
El Chapo's Wife Expected to 'Rat Out' Sinaloa Cartel Members, Report Says
Aispuro was key in helping him break out of the high-security Altiplano jail near Toluca, Mexico, in 2015, according to the report. The prosecution claims Aispuro used her visitation rights to function as an emissary between her husband and a group of conspirators, including her own brother, who arranged the escape by digging a nearly mile-long tunnel into his cell's shower.

Once El Chapo was recaptured and returned to Altiplano in 2016, according to the testimony, Aispuro attempted to help him escape again by organizing a plot to bribe Mexico's top prison official.

The notorious drug lord, however, was extradited to the US before the plan could be carried out.

Guzman's wife faced a sentence of 10 years to life in prison if convicted of the original conspiracy charge. Nevertheless, a source quoted in the report said that she will be categorized as a "minor participant" in the conspiracy and will likely receive a far lighter term as a result of her deal with the government.

El Chapo Guzman, a former co-leader of the Sinaloa drug cartel, was convicted in a federal trial in Brooklyn in 2019 and is now serving a life sentence in Colorado's "Supermax," the country's most secure federal prison. Even after a jury found him guilty, Aispuro, who is reportedly his third or even fourth wife, remained free until her arrest in February this year.