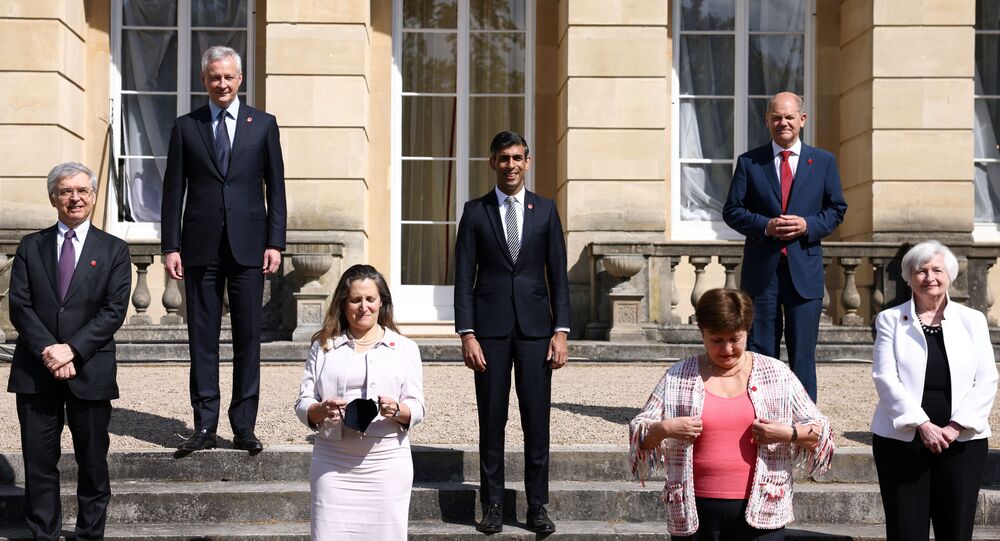 The finance chiefs of the US, UK, Canada, France, Germany, Italy, Japan and the European Union also agreed on measures to tax transnational countries based on where they do business, not where they are headquartered.

The Group of Seven Western nations has agreed a minimum corporate tax rate and measures aimed at ending avoidance by Big Tech giants.

Finance ministers from the G7 countries meeting in the UK's capital rejected US President Joe Biden's call for a 21 percent global minimum business tax rate, settling on a far-lower figure of 15 percent.

But they agreed to re-jig how tax is charged, moving to a system based on twin "pillars" of profits and sales, rather than profit alone.

"After years of discussion, G7 finance ministers have reached a historic agreement to reform the global tax system to make it fit for the global digital age," British Chancellor of the Exchequer Rishi Sunak told reporters at the meeting.

© REUTERS / Kacper Pempel
India's 'Final Notice' to Twitter: Comply With IT Rules or Face 'Unintended Consequences'
The finance chiefs of the US, UK, Canada, France, Germany, Italy, Japan and the European Union (EU) also agreed on measures to tax transnational countries based on where they do business, not where they are headquartered.

"We commit to reaching an equitable solution on the allocation of taxing rights, with market countries awarded taxing rights on at least 20 per cent of profit exceeding a 10 per cent margin for the largest and most profitable multinational enterprises," the text of the agreemenr read.

"Enterprises can no longer shy away from their fiscal obligations by cunningly transferring their profits to countries with opaque tax structures," Scholz said, calling it "bad news for tax havens".

Social media giants like Facebook, Google and Twitter, which operate purely on the internet, can effectively trade across borders without setting up shop in other countries.

US Treasury Secretary Janet Yellen said the accord "provides tremendous momentum" towards a global agreement on a 15 percent minimum rate that she said "would end the race-to-the-bottom in corporate taxation, and ensure fairness for the middle class and working people in the US and around the world."

Google publicly supported the moves. "We strongly support the work being done to update international tax rules," spokesman José Castañeda said. "We hope countries continue to work together to ensure a balanced and durable agreement will be finalized soon."

And Facebook's Vice-President for Global Affairs and Communications Nick Clegg, the former leader of the UK's Liberal Democrats and deputy prime minister in David Cameron's Conservative-led 2010-2015 coalition government, claimed on Twitter the company welcomed the opportunity to pay more tax.

According to Dr Leopoldo Parada, Lecturer in Tax Law at the University of Leeds School of Law in the United Kingdom, the deal is "apparently positive" because it shows an "unprecedented commitment to counteract tax issues from a global perspective".

"However, it is undeniable that some countries will lose. Indeed, this agreement will have an important impact on developing countries wishing to attract real economic activities using their tax systems for this purpose. After all, we must accept that not all developing countries (or emerging economies) are tax havens, and not all investments flowing to these 'low-tax jurisdictions' comes from paper companies".

Dr Parade sees no "tremendous impact" on Big Tech companies, because the proposal was "never about digital giants, unlike Pillar 1 which started as a proposal targeting tech giants".

"Second, we need to understand who benefits from the fact of taxing residuals when a country imposes a lower effective CIT. In this case, the US appears to be the big winner. A country like the UK will not see much revenue. Similarly, I do not see companies like Amazon or Google being largely affected by this measure. However, the big impact will be again on emerging economies, that is, countries that legitimately want to attract real investments. Those countries will face now a big challenge, which will obligate them to reinvent the way of attracting real investment. I expect that all this G7-OECD effort to eliminate tax competition comprehensively will simply switch into other forms of competition, including direct subsidies or labor", he explains.

​Several EU member states have tax rates lower than 15 percent, including Bulgaria, Hungary and the Republic of Ireland, where both Facebook and Twitter have their European headquarters.

Other well-known low-tax regimes such as Switzerland, Liechtenstein, the British Channel Islands and the Isle of Man are outside the bloc.