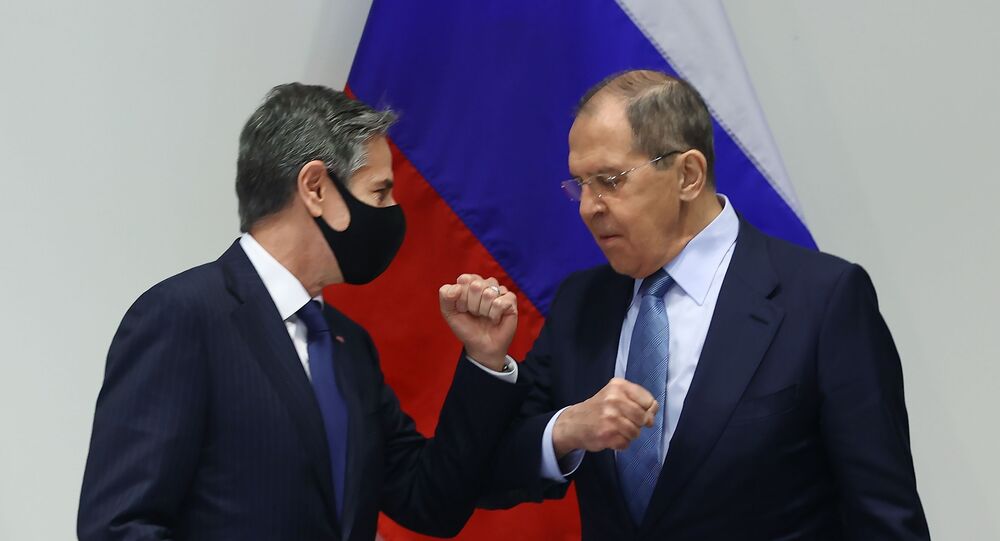 On Wednesday, Russian Foreign Minister Sergey Lavrov met with his American counterpart, US Secretary of State Antony Blinken, in Reykjavik, Iceland. It was their first personal meeting, and the conversation lasted about two hours.

The remarks were made by Lavrov following his meeting with US Secretary of State Antony Blinken in Reykjavik.

"Generally, I believe that we had a very useful conversation. We will report to our presidents, hopefully, they will determine further ways to improve relations," Lavrov said.

Lavrov reportedly told Blinken that Moscow was ready to discuss any issues with Washington, but stressed that dialogue must be held in an honest manner and on the basis of mutual respect.

"We have significant differences in assessing the international situation, in approaches to the tasks that need to be solved to normalize it [the international situation]. Our position is very simple: we are ready to discuss any issues, without any exception, having an understanding that this discussion will be honest, with presented facts and of course, on the basis of mutual respect," Lavrov said.

The Russian foreign minister added that Moscow and Washington must decide what they should further do with their bilateral relations.

During the meeting, the two also discussed the work of Russian diplomatic missions in the US, and US ones in Russia.

"Of course, today, we have touched upon the work of the Russian diplomatic missions in the US, and the US ones in Russia; this vicious cycle of blows that was started by [former US President Barack] Obama when he was leaving the White House", Lavrov noted, adding that "nobody is interested in this chain reaction" and outlining that he noticed the same feeling in "our US colleagues".

Lavrov and Blinken agreed to come up with proposals for Russia's President Vladimir Putin and America's President Joe Biden before their bilateral summit.

"We will prepare proposals for our presidents both on these issues [work of diplomatic missions] and the matters related to our dialogue on strategic stability. This is a key task, over which most countries are concerned," Lavrov said after the meeting.

A summit between the Russian and American leaders is expected to take place in early summer.

Lavrov also indicated that he had discussed with Blinken how to make joint efforts on the Iran nuclear deal, Afghanistan and other issues more effective.

"We have agreed to continue our joint efforts – that are successfully developing – on regional conflicts where Russian and the United States have similar interests: these are the Korean nuclear issue, the situation around the revival of the Joint Comprehensive Plan of Action on the Iranian nuclear program, and Afghanistan. We discussed how these actions may become more effective," Lavrov said.

According to State Department spokesperson Ned Price, the discussion also touched on issues like finding a long-term solution to end the conflict between Armenia and Azerbaijan.

"The Secretary underscored the imperative of ensuring humanitarian access for the people of Syria, while they also discussed regional issues, including finding a long-term political solution to the conflict between Armenia and Azerbaijan," Price said on Wednesday.

© Sputnik / Пресс-служба МИД РФ
Russian Foreign Minister Sergey Lavrov and US State Secretary Antony Blinken during their meeting on the margins of the Arctic Council
The Russian foreign minister noted that an agreement was reached that the two countries "must cooperate in the areas of mutual interest and where we can gain a positive outcome, for example on conflict situations, but – most importantly – on strategic stability issues."

Blinken also highlighted that "there are many areas where our interests intersect and overlap", including the coronavirus pandemic, climate change, the nuclear programs of Iran and North Korea and other issues.

"It’s our view if the leaders of Russia and the United States can work together cooperatively, our people, the world, can be a safer and more secure place, and that’s what we seek", Blinken noted.