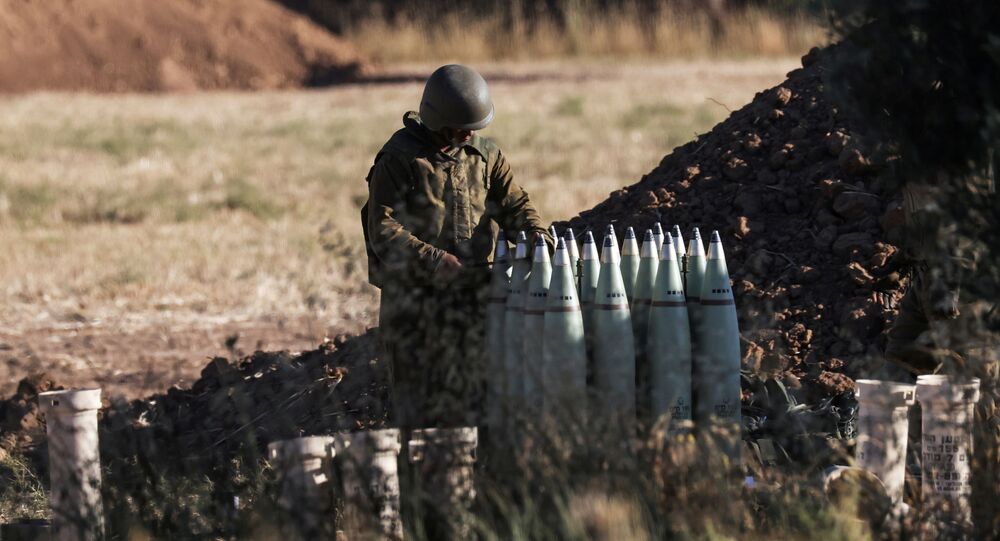 On Wednesday, the Israel Defence Forces (IDF) said that air raid sirens are again sounding in southern areas of the Jewish state as a new batch of rockets has been fired by Hamas from the Gaza Strip.

A diplomatic source in the UN Security Council has claimed that France, along with Tunisia, Egypt, and Jordan is preparing a draft UN Security Council resolution that will call for a ceasefire between Israel and Hamas as well as organising a humanitarian corridor in the conflict zone.

"It is written to be acceptable to everyone", the source added.

This came as the news agency AFP reported that a UN Security Council (UNSC) resolution calling for an Israel-Hamas ceasefire has been proposed by the French mission to the United Nations even though a UNSC meeting wrapped on Tuesday without issuing a statement on the escalation of tensions between the Jewish state and the Islamist militant group.

Paris said "the three countries agreed on three simple elements: The shooting must stop, the time has come for a ceasefire, and the UN Security Council must take up the issue".

The newspaper The Times of Israel cited an unnamed source as saying that the text of the resolution underscores the urgent need for humanitarian assistance to Gaza and does not mention rocket fire by Hamas, although amendments are expected to be added in the next few days.

"The strategy is to convince all parties, so the text should be very focused and acceptable to everyone", the source stressed, adding that it is still unclear when the resolution will be brought before the Security Council.

The insider also said "the issue is concerning for everyone, and [UNSC] members cannot be silent on" the matter.

© AFP 2021 / MAHMUD HAMS
A thick column of smoke rises from the Jala Tower as it is destroyed in an Israeli airstrike in Gaza city controlled by the Palestinian Hamas movement, on May 15, 2021.

China's Ambassador to the UN Zhang Jun, for his part, said that during a closed-door meeting UNSC members "heard the proposal made by our French colleague in the Council and for China, definitely, we are supportive of all efforts facilitating the ending of the crisis and the coming back of peace in the Middle East".

The remarks came a few days after two unnamed diplomats told The Times of Israel that the US has again blocked attempts by Norway, Tunisia, and China at the UNSC to pass a joint resolution condemning the violent escalation in the Israeli-Palestinian conflict.

During the previous two UNSC meetings, efforts to pass such a document were also blocked by Washington, who asked for more time for its own diplomatic activity.

We provided advance warning to those inside & allowed sufficient time to evacuate. pic.twitter.com/uJ9LQsRAHo

US Ambassador to the UN Linda Thomas-Greenfield pointed out that Washington is "working tirelessly through diplomatic channels to try and bring an end to this conflict".

In the latest development, US President Joe Biden has again indicated support for a ceasefire between Israel and Hamas, but stopped short of calling for an immediate halt to bilateral hostilities.

© AFP 2021 / HATEM MOUSSA
Iranian Media Reveals How Some Hamas Rockets Have Been Defeating Israel’s Iron Dome
During a phone conversation with Israeli Prime Minister Benjamin Netanyahu on Monday, Biden also "reiterated his firm support for Israel's right to defend itself against indiscriminate rocket attacks", according to a White House statement.

The current crisis erupted last week after civil unrest in East Jerusalem, prompting hostilities on the border of Israel and the Gaza Strip, with Palestinian militants having fired thousands of rockets at Israel and the latter retaliating with airstrikes.

So far, the UN Security Council has adopted no statements on the Israeli-Palestinian violence due the US veto of the documents.