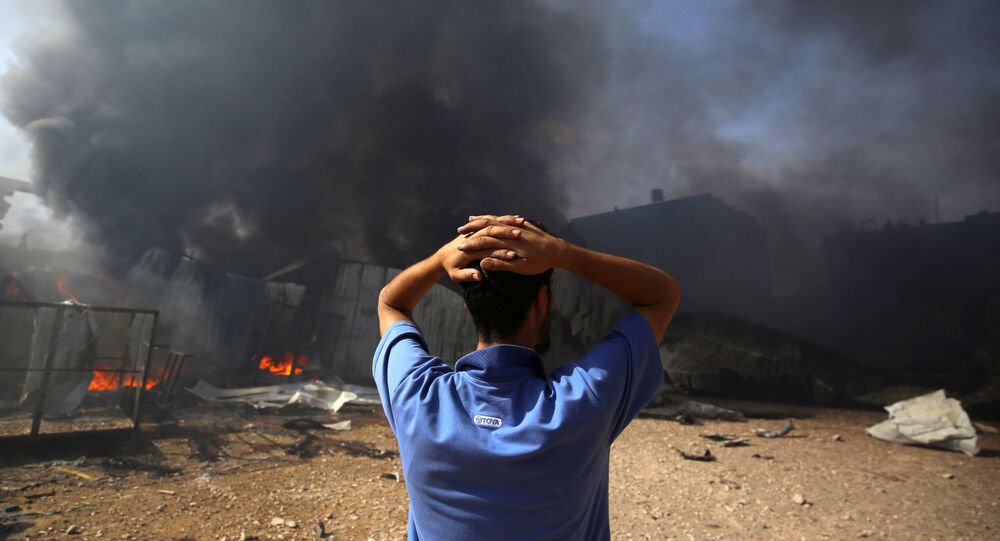 On Sunday, Israeli Ambassador to the US Gilad Erdan expressed gratitude to President Joe Biden for issuing a "strong message of support" for the Jewish state in its response to Hamas rocket attacks from Gaza.

US President Joe Biden has signalled support for a ceasefire between Israel and the Islamist movement Hamas, but stopped short of calling for an immediate halt to bilateral hostilities.

The president is reportedly under pressure from the Democratic Party to take a tougher position on Israel and call for an immediate ceasefire between the Israel Defence Forces (IDF) and Hamas. The group is viewed as a terrorist organisation by Tel Aviv.

The White House said in a statement on Monday that during a phone conversation with Israeli Prime Minister Benjamin Netanyahu – the second such call in three days – Biden "reiterated his firm support for Israel's right to defend itself against indiscriminate [Hamas] rocket attacks".

© AFP 2021 / JACK GUEZ
This picture taken from the southern Israeli city of Sderot shows rockets fired from the Gaza Strip being intercepted by the Israeli Iron Dome missile defence system, on May 16, 2021.

"He encouraged Israel to make every effort to ensure the protection of innocent civilians. The two leaders discussed progress in Israel's military operations against Hamas and other terrorist groups in Gaza. The president expressed his support for a ceasefire and discussed US engagement with Egypt and other partners towards that end", the statement pointed out.

This came after Biden spoke to Netanyahu on Saturday in phone talks, during which POTUS expressed alarm over civilian casualties in Gaza.

"The president noted that this current period of conflict has tragically claimed the lives of Israeli and Palestinian civilians, including children. He raised concerns about the safety and security of journalists and reinforced the need to ensure their protection", according to a readout released by the White House at the time.

Fighting a terrorist organization that operates within civilian areas isn’t easy. Watch as IDF pilots call off a strike because children were there: pic.twitter.com/N8ycwqwgck

Netanyahu, for his part, insisted Israel "is doing everything to avoid harming" those who aren't involved with Hamas and that "those not involved" were evacuated from a 12-storey building in the Gaza Strip that housed the offices of the Associated Press and Al Jazeera. The building collapsed on Saturday after a strike by three Israeli missiles.

Saturday's conversation between Biden and Netanyahu followed the US president telling reporters he anticipates the tensions between Israel and the Palestinians will come to an end "sooner rather than later". He also stressed that US administration officials have been in "constant contact" with their counterparts in the Middle East.

© REUTERS / MOHAMMED SALEM
Israeli Forces Launch More Attacks, Causing Power Shutdown in Gaza City, Source Says
Violence between the Palestinians and Israelis erupted last week on the border of the Gaza Strip. Some 3,100 rockets have since been launched from the enclave into Israel, with about 1,210 of them intercepted by Israel's Iron Dome missile defence system. In retaliation, the Israeli military launched hundreds of rockets at what it claimed were Hamas infrastructure buildings across the border.

The hostilities were preceded by an escalation in the Israeli-Palestinian conflict that started earlier this month, when unrest began in East Jerusalem after a court decided to evict several Palestinian families from the area.