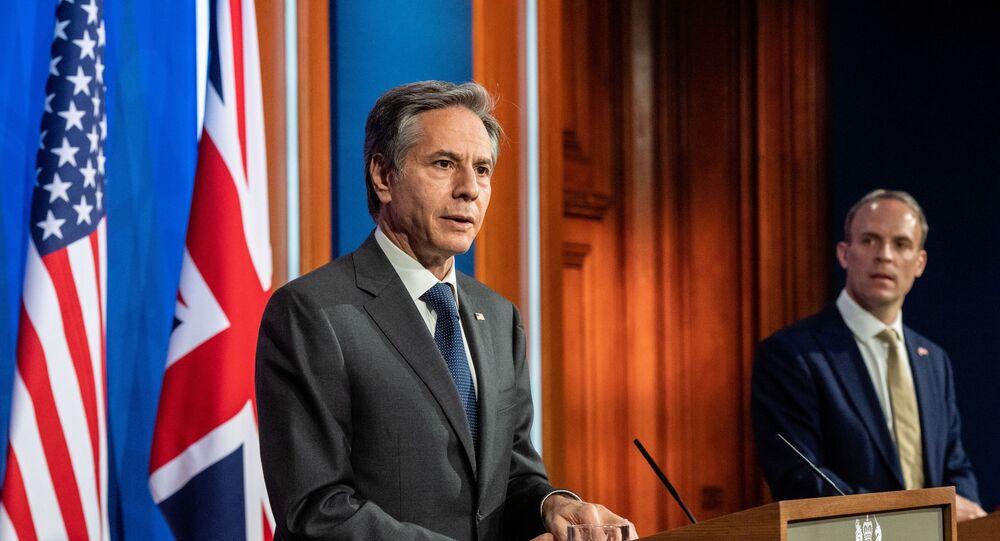 Blinken and Raab: US and UK Seek Predictability in Relations With Russia, Want Moscow to 'Behave'

WASHINGTON (Sputnik) - US President Joe Biden will convey to Russian President Vladimir Putin during their upcoming meeting that the United States is not seeking to escalate the situation and seeks more stable and predictable relations with Russia, Secretary of State Antony Blinken said on Monday.

"President Biden has been very clear for a long time including before he was President that if Russia chooses to act recklessly or aggressively, we’ll respond. But we are not looking to escalate. We would prefer to have a more stable, more predictable relationship, and if Russia moves in that direction, so will we. And I think President Biden will have an opportunity when he meets with President Putin to talk about that directly", Blinken said.

Raab, in turn, said that an opportunity for better relations with Moscow exists if Russia "changes its behaviour".

At the same time, Blinken said that he welcomed the United Kingdom's recent announcement about extending the global Magnitsky sanctions targeting Russia.

"I also want to thank the United Kingdom, for joining us in holding Russia to account for its reckless and aggressive actions", Blinken said during a briefing. "We have reaffirmed our unwavering support for the independent sovereignty and territorial integrity of Ukraine, which I'll be visiting later this week. I also welcomed the Foreign Secretary's recent announcement on the extension of global Magnitsky sanctions to combat Russian human rights abuses."

Last week, US President Joe Biden said in an address to Congress that Washington is seeking no escalation with Russia and believes both countries can cooperate where their interests converge. The US president had offered Putin to meet during summer in a yet to be determined European country.

© REUTERS / KEVIN LAMARQUE
Psaki: White House Does Not Have Confirmation on Timing, Details of Biden-Putin Summit

Tensions between Moscow and Washington intensified after the United States imposed sanctions on 32 Russian entities and individuals as part of a new round of sanctions over Moscow's alleged cyberattacks and other hostile acts against US interests. Washington also expelled 10 Russian diplomats from the country and prohibited US entities from purchasing Russian government bonds during primary placements.

The Russian Foreign Ministry condemned the latest round of US sanctions against Russia as running contrary to the interests of the two nations. In response, Russia banned eight US citizens from entering the country.

Raab and Blinken also discussed relations with China and agreed that Beijing should be held to the commitments it has made but also relations should be advances in a positive manner.

"I think it’s fair to say we see eye-to-eye on the need to stand up for our values, holding Beijing to the commitments that they’ve made", Raab said, adding that this stance refers to the Hong Kong declaration and other commitments. "But also at the same time finding constructive ways to work with China in a sensible and positive manner where that’s possible."

Blinken said that the United States and the United Kingdom will continue to cooperate to address a human rights abuses in China.

"Together, our two countries recently took measures to prevent British and American businesses from inadvertently supporting forced labor and Xinjiang and elsewhere and China", Blinken said during a briefing. "We continue our robust cooperation to address the atrocities in Xinjiang, a crackdown on pro-democracy activists, and politicians in Hong Kong, which breaches China’s international commitments, and the repression of media freedom across China and in other parts of the world."

According to Blinken, the US does not have a goal to contain China, but Washington will act if Beijing tries to undermine the international order.

"It is not our purpose to try to contain China or to hold China down, what we are trying to do is to uphold the international rules-based order that our countries have invested so much in, over so many decades", Blinken said. "When any country - China or otherwise - takes action that challenge or undermine or seek to erode that rules-based order and not make good on the commitments that they’ve made to that order, we will stand up and defend the order."

President Joe Biden has had a rocky start in his relationship with China, with officials from the two countries openly bickering before the media at a meeting in Alaska hosted by Blinken earlier this year.

While Biden has undone most of Donald Trump’s executive orders on immigration, climate and other matters, he has left intact the tariffs on China, indicating that his administration would likely use them in the future to pressure Beijing into making concessions on trade and other issues.

The United States will continue to encourage the European Union and the United Kingdom to prioritise economic and political stability in Northern Ireland as the Brexit-related provisions are being implemented.

“As the United Kingdom and the European Union begin implementing Brexit-related provisions, we will continue to encourage them to prioritize political and economic stability in Northern Ireland”, Blinken said.

Raab said that it is of vital importance to the United Kingdom to maintain the Good Friday agreement on Northern Ireland.

"The Good Friday is absolutely crucial", Raab said. "In terms of the Northern Ireland protocol, obviously there are bits of it that protect the EU equities of their single market, bits that protect the integrity of the single market of the United Kingdom. We are going to make sure that in the Joint Committee... we work through all these proposals and we implement them in a balanced way."

Over the past several weeks, the UK province of Northern Ireland has been gripped by clashes between police and demonstrators, who have been protesting against the post-Brexit regulations governing the island of Ireland.

As part of the withdrawal agreement, Northern Ireland remained in the European single market and customs unions after United Kingdom left the bloc for good on 31 December 2020.

Although there is no hard border between Northern Ireland and the Republic of Ireland, all goods and animal-based products coming from the rest of the UK territories must be checked upon arrival to Northern Ireland to comply with the EU regulations on food and animals.