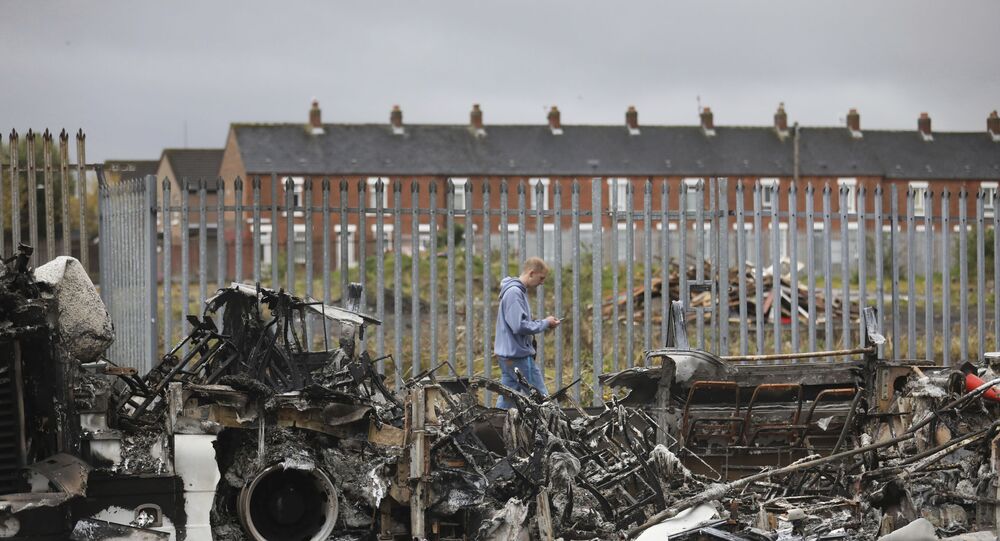 In 1921 Britain granted independence to the Irish but the six counties of Northern Ireland were hived off and remained part of the United Kingdom. Irish republicans, who tend to be Catholic, have lived uneasily with their pro-British Protestant neighbours ever since.

Police in Northern Ireland have deployed water cannon on the streets of Belfast after coming under attack from both loyalist and republican youths.

The trouble, which started a week ago, was triggered by the decision not to prosecute 24 Sinn Féin politicians - including Deputy First Minister Michelle O'Neill - for breaking COVID-19 rules when they attended the funeral of Provisional IRA veteran Bobby Storey.

If the riots taking place in Belfast were happening in any part of Great Britain the Government would be all over them. And yet Ministers who are never seen more than three feet from a Union Flag seem reluctant to discharge their responsibilities across the whole of the UK.

​Rioters have injured 74 police officers and boys as young as 13 have been charged with offences of violence.

When The Troubles began in 1969 Protestant mobs chased many Catholic families out of certain streets, firebombing their homes if they dilly-dallied.

Back in the day, soldiers on patrol in #Belfast carried one of these tribal maps. Lanark Way/Springfield Rd was a flashpoint back then. I kept mine as a historical artifact. Seems I was a bit previous. #OpBanner #Brexit pic.twitter.com/xke4HtEf5B

​The British Army was actually brought in during the early 1970s to protect Catholic families from such attacks.
Throughout the 1970s and 80s those boundaries ossified and barricades, known as “peace walls”, were erected to keep the two communities apart because just the sight of an Irish tricolour was likely to enrage a loyalist, and likewise a Union flag could lead to a stoning from republican mobs.

More than 3,600 people lost their lives during The Troubles but the Good Friday Agreement in 1998 was supposed to bring peace to the island of Ireland.

But although the Provisional IRA, the INLA, the UVF and UDA laid down their guns and mortars and then decommissioned those weapons little was done to integrate the two communities.

​The majority of children in Irish nationalist and republican communities still go to Catholic schools and most boys and girls in the unionist and communities districts go to Protestant schools.

Although there was an effort made to replace paramilitary murals with more positive images - for example in Portadown a mural of Billy “King Rat” Wright, the leader of a loyalist death squad, was replaced with one of footballer George Best - most of the peace walls were never taken down.

It is still common to see nakedly sectarian graffiti - in which Catholics are referred to as Taigs or Fenians and Protestants as Prods - on these walls.

Belfast is a sectarian mosaic, with several jagged faultlines running through the heart of the city.

It has been this way for generations and in the 1970s the Shankill Butchers, a notorious gang of loyalist thugs believed they could tell if someone was Catholic just by the route they took home from the city centre.

East Belfast is overwhelmingly Protestant but there are small Catholic enclaves in the Short Strand and Ormeau Road.

But the major troublespots are west of the River Lagan, which runs through the city before entering Belfast Lough, and the M1 motorway.

Andersonstown, Ballymurphy, the Falls Road and the Springfield Road are all strongly republican strongholds, with many prominent IRA men having been buried in Milltown cemetery.

But north of the Falls Road and Springfield Road, running in parallel, is the staunchly loyalist Shankill Road and the interface is in the side streets between the two, notably in Lanark Way which is where a bus was set on fire by a loyalist mob earlier in the week.

Gates set alight at the peace line between between the Shankill Road and Lanark way interface in North Belfast. Crowds of a few hundred on each side throwing petrol bombs over in both directions. pic.twitter.com/LYnRmAETTY

North Belfast is more complicated with staunchly republican areas like the Ardoyne and New Lodge sandwiched between loyalist Cliftonville and Woodvale.

In 2001 Catholic parents taking their children to Holy Cross Primary School in the Ardoyne were taunted and pelted with bottles by a Protestant mob in disturbing scenes.

The loyalists claimed they had been subjected to attacks by Catholics.

The Good Friday Agreement committed the power-sharing government of Northern Ireland to promote integrated housing, where Catholics and Protestants would live next door to each other.

In 2013 the then First Minister, Peter Robinson of the DUP, and Deputy First Minister Martin McGuinness, from Sinn Fein, published the Together: Building a United Community strategy.

It committed to building 10 integrated housing estates and also promised: “We will establish a 10 year programme to reduce and eventually remove all interface barriers working together with the local community.”

But delivering integrated housing and taking down the interface barriers has proved hard, if not impossible.

In 2017 four Catholic families left an integrated housing estate off Ravenhill Road in south Belfast after threats were reportedly made towards them by loyalists.

Few interface barriers have been taken down and in the last week they have been the only thing stopping full-blown warfare between the communities.