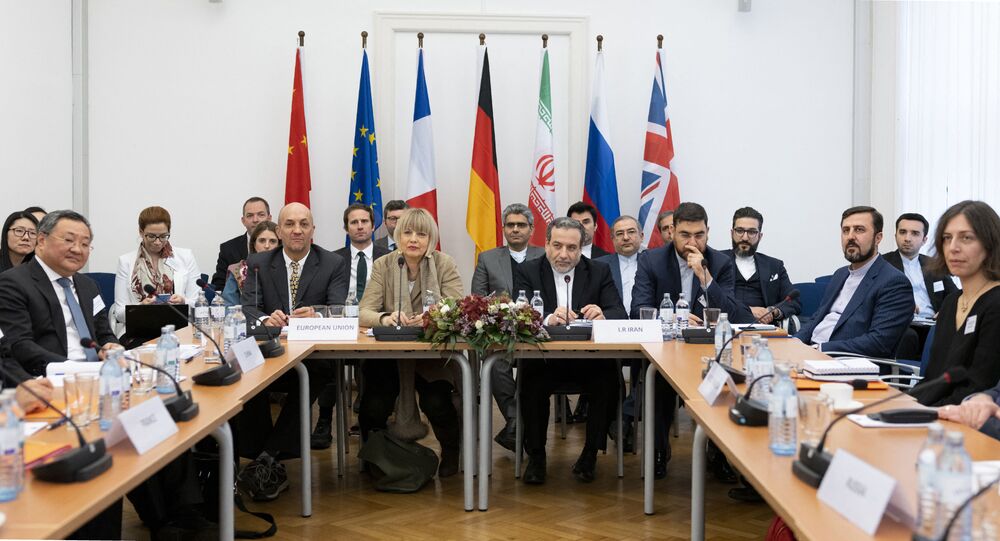 JCPOA: US 'Open' for Talks With Iran as Tehran Says Direct Negotiations With Americans 'Unnecessary'

US President Joe Biden signalled his interest in returning to the Iran nuclear deal during his election campaign. However, after more than two months in office, POTUS still has not succeeded in organising talks with Tehran to discuss the issue, instead issuing demands for Iran.

Washington has said that it will join the upcoming in-person meeting of the Joint Commission of the Joint Comprehensive Plan of Action (JCPOA, also known as the Iran nuclear deal) in Vienna in sharp contradiction to earlier statements by Iran, AFP reported citing State Department spokesman Ned Price. The US diplomat stressed that his country is "open" to holding direct talks with Tehran on the issue of restoring JCPOA compliance.

"These remain early days, and we do not anticipate an immediate breakthrough as there will be difficult discussions ahead. But we believe this is a healthy step forward", Ned Price said.

Earlier, the Iranian Foreign Ministry stated that the US was not going to take part in the upcoming talks on the JCPOA slated to be held in Vienna next week.

"It is their business, whether other parties to the [nuclear accord] seek to consult bilaterally or multilaterally with the United States […] whether in Vienna or elsewhere. The Iranian delegation will not have any talks with the US delegation at any level", Iran's Deputy Foreign Minister Abbas Araqchi said.

Responding to Washington's announcement that it intended to participate in the JCPOA talks, Abbas Aragchi said that the US will not be present at the meetings that Iran will attend and Tehran's delegation will not engage in direct talks with American counterparts. The deputy foreign minister later added that Iran would not mind if other parties to the JCPOA help to bring the US into the nuclear deal.

Foreign Minister Javad Zarif stated on his Twitter page that Tehran is planning to hold an in-person meeting with the remaining signatories to the JCPOA – representatives of the EU, France, Germany, the UK, China, and Russia – in Vienna on 6 April, while not mentioning the US in the list. Zarif stressed that a meeting between Iran and the US was "unnecessary" at this point.

An anonymous diplomatic source added that the US will not be taking part in the meeting of the Joint Commission of the JCPOA on 6 April since it was no longer part to the accord. The source added at the same time, that US experts are "quite likely" to still come to Vienna and "stay somewhere nearby".

Compliance in Exchange for Lifting Sanctions

The minister elaborated that the talks will focus on lifting sanctions against Iran in the shortest time possible in exchange for Iran "ceasing [the] remedial measures" it has introduced over the last two years in light of the US withdrawal from the JCPOA.

Russia’s permanent representative to international organisations in Vienna, Mikhail Ulyanov, confirmed the information. According to him, one group of representatives will be dealing with the issues of lifting sanctions, while the other will be working on the practical steps to resolve nuclear issues pertaining to JCPOA compliance.

On the same day, an anonymous source allegedly familiar with the negotiating process, told Iran’s PressTV that Tehran had stressed in a virtual meeting with other JCPOA signatories that it will not return to nuclear accord compliance unless the US lifts all sanctions. The commission, which will gather on 6 April, will thus be working out steps that Washington has to take in order to lift sanctions and enable Tehran's compliance with the nuclear agreement signed back in 2015.

US and Iran Failing to Meet at Negotiating Table

The absence of the US at the upcoming Vienna talks on 6 April marks the continuing failure of the two countries to sit down to discuss the return to the JCPOA of all involved parties. Washington previously refused to start talks with Tehran unless it stops violating the treaty’s provisions by exceeding nuclear fuel stockpile limits and breaking the 3.67% uranium enrichment level.

Iran, in turn, refused to give in to America’s demands, stressing that these "violations" were "remedial measures" introduced by Tehran in response to Washington's withdrawal from the JCPOA under President Trump on 8 May 2018. The Islamic Republic further argued that no talks on returning to compliance can be held unless Washington lifts sanctions it imposed on Iran in 2018, crippling its oil exports and access to the global banking system.

The current impasse in US-Iranian talks on the JCPOA comes in the wake of new US President Joe Biden expressing interest in returning his country to the nuclear accord in his campaign speeches. However, more than two months after Biden's inauguration, his administration has so far failed to arrange negotiations with Tehran on terms suitable for both parties.