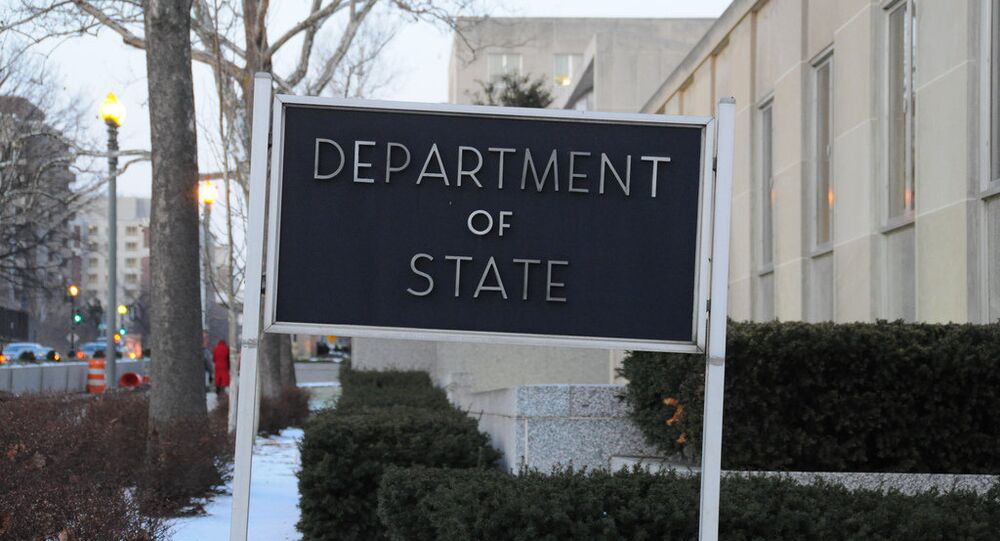 In a coordinated move, the EU on Tuesday unveiled sanctions against four Russian officials for their "roles in the arbitrary arrest, prosecution and sentencing of [Russian opposition figure] Alexei Navalny”; hours later, the US imposed sanctions on seven Russian officials, including Federal Security Service (FSB) director Alexander Bortnikov.

The Kremlin has weighed in on the recent Western media reports that Washington and London were pondering fresh penalties targeting Russia's businesspersons and sovereign debt over the alleged use of chemical weapons.

When asked if Russia had any reciprocal restrictions in the pipeline, Peskov added:

"First, no one has yet introduced sanctions against Russian businesspersons. Of course, we hope that such crazy calls will remain just media reports and will not find infusive support of the US political elite. Hypothetical arguments are most likely inappropriate. Let us wait and see how the situation develops."

The US and Britain are considering slapping Russia with additional penalties for the alleged use of chemical weapons, with options discussed ranging from personalised sanctions to targeting the nation’s sovereign debt, reports Bloomberg.

The Organisation for the Prohibition of Chemical Weapons will reportedly be pressured by UK officials into demanding that Russia provide answers regarding its supposed use of banned substances, according to a source cited by the outlet.

Options regarding possible punitive options will purportedly be discussed with key European allies such as France and Germany in the coming weeks.

British officials are said to be in discussions with their American counterparts regarding potential new measures against Russia, which they accuse of ‘stonewalling’ an investigation into opposition figure Alexei Navalny’s alleged poisoning, a source was cited as claiming.

UK Foreign Secretary Dominic Raab on Thursday went on Twitter to urge Russia to ‘adhere to its obligations’ under international law.

The UK welcomes EU and US sanctions against those responsible for the poisoning and arbitrary detention of @Navalny. We will continue to work closely with international partners to hold Russia to account for failing to uphold their Chemical Weapons and Human rights obligations

​The US and its European allies have been peddling unproven claims that Russia used a highly potent, Novichok-like nerve agent to poison Alexey Navalny last year.

The US, which despite its adoption of the Chemical Weapons Convention (CWC) has yet to destroy its own stocks of chemical weapons, is anticipated to closely adhere to the Chemical and Biological Weapons Control and Warfare Elimination Act of 1991 and follow it up with a second, ‘more extensive’ round of sanctions unless Russia meets certain conditions, according to the sources.

The stipulated terms reportedly include extending assurances it will refrain from the use of such weapons and allow inspections of suspected chemical weapons sites.

One option under consideration, according to sources, is pressuring Moscow with sanctions targeting senior business figures in line with the Magnitsky Act, which authorises the US president to sanction individuals for perceived human rights violations or corruption, said the sources cited by the outlet.

However, if Russia is deemed to have breached the international ban on chemical weapons, President Biden might consider slapping sanctions on the nation’s sovereign debt. The latter option, claim the outlet’s sources, could be feasible if done in cooperation with European allies.

Dire warnings of a financial market fallout linked with Russia’s sovereign debt being sanctioned were voiced in 2018 by the Treasury Department under former Secretary Steven Mnuchin.

However, current advocates of the move, such as Daleep Singh, a former Obama-era Treasury official, who is now a deputy on Biden’s National Security Council, are cited as claiming there would be minimal negative spillover as Russia has since moved away from buying US-denominated debt toward the euro.

As the administration of US President Joe Biden announced its first Navalny-linked sanctions against Russia on 2 March; the penalties echoed those imposed earlier by the European Union and the UK.

The US sanctions include Treasury Department Office of Foreign Assets Control restrictions against the chief of the FSB, the prosecutor general, and several other senior political and security services officials.

The US Department of Commerce also introduced restrictions against 14 Russian entities, including 13 private companies and a state research institute, with the State Department using the pretext of the 1991 law for its punitive actions.

In a statement on 2 March, Secretary of State Antony Blinken said that the US “exercised its authorities” in the form of sanctions “to send a clear signal that Russia’s use of chemical weapons and abuse of human rights have severe consequences", adding that “any use of chemical weapons is unacceptable and contravenes international norms”.

.@StateDeptSpox: The State Department joined Treasury and Commerce in a coordinated, whole of government action against Russian Government entities & Russian officials for attempting to assassinate opposition figure Aleksey Navalny with a chemical weapon in Russia in August 2020. pic.twitter.com/IRFshSMxD7

​This came after Brussels on Tuesday unveiled its first sanctions under a new global human rights sanctions regime.

Four Russian officials were targeted for their alleged "roles in the arbitrary arrest, prosecution and sentencing of [Russian opposition figure] Alexei Navalny, as well as the repression of peaceful protests in connection with his unlawful treatment".

There has not been any official comment on the report from communications aides at the White House National Security Council or the UK Foreign Office.

Russia, which completely eliminated its 40,000 tonne stockpile of Soviet-era chemical weapons in the late 2010s, in accordance with its obligations under the Chemical Weapons Convention, blasted the US and Europe over the new Navalny sanctions.

Foreign Ministry spokeswoman Maria Zakharova on Tuesday characterised the punitive measures as the "triumph of absurdity over reason", used as “an excuse to continue open interference in our internal affairs”. It was added that Russia will “react” to the new restrictions “on the basis of the principle of reciprocity, not necessarily symmetrically”.

US Reportedly Names Condition for Russia to Avoid New Sanctions