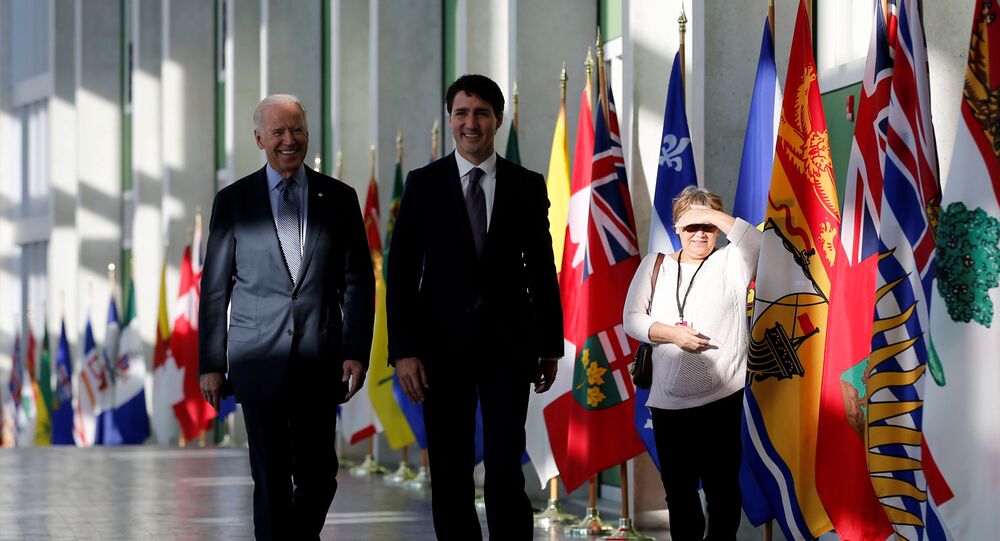 WASHINGTON (Sputnik), Michael Hughes - US President Joe Biden and Canadian Prime Minister Justin Trudeau in their first official bilateral meeting, as they vowed to cooperate on a range of security, health and climate issues, seemed eager to get beyond tensions lingering from Ottawa's battles with the previous administration in Washington.

Before Biden took office the US and Canadian governments were at odds in both substance and style - especially on trade matters - with Trudeau often finding himself the target of then-President Donald Trump’s wrath. In 2019, the New York billionaire called Trudeau "two-faced" after video surfaced of the prime minister mocking Trump on the sidelines of a NATO summit. During the height of the tariff war in 2018 Trump in a twitter storm called Trudeau "dishonest and weak."

The question remains as to whether the relationship is headed for a substantial improvement or simply a cosmetic overhaul. Biden’s rhetoric might not be as bellicose as his predecessor’s, but many of the White House’s policies are no less problematic for Canada’s economy.

The Biden administration pulled the plug on construction of the Keystone XL pipeline, for example, and a new "Buy America" executive order likely has Ottawa concerned, especially considering the US market represents about 75% of Canadian exports.

These topics were conspicuously absent from the day’s proceedings. In the 2,500-word joint statement released after the talks, "trade" is mentioned once and in the context of China's alleged unfair practices.

Regardless of the real policy differences that remain between the United States and Canada, Trudeau could hardly contain his relief over the recent changes in Washington.

"US leadership has been sorely missed over the… past years," Trudeau told reporters ahead of the virtual meeting on Tuesday.

In a joint statement at the end of the day entitled "Roadmap for a Renewed US-Canada Partnership," Trudeau even endorses the US president’s clunky campaign slogan, "Building Back Better," which always implied that Biden was the man for the job to reverse Trump’s MAGA approach.

The roadmap said it is in Washington and Ottawa’s best interests to "revitalize" the alliance. In addition to the $2 billion in bilateral trade, the roadmap hails the "unique bond" and values the two countries share, a sentiment echoed by Biden in the post-meeting presser.

"The United States has no closer and no more important friend than Canada. Our nations share a close geography and history that will forever bind us together, but our values are even more consequential," Biden said on Tuesday.

Another theme the two leaders hit on was that the United States and Canada were going to improve cooperation on solving problems that are global in nature, such as climate change and the COVID-19 pandemic, which the two leaders said was their "top priority," according to a White House fact sheet.

In addition, both leaders throughout the day underscored the importance of multilateral institutions such as the United Nations and its agencies.

"For both our nations, getting COVID-19 under control at home and around the world is the immediate priority. And we committed to work together to help prevent future biological threats by strengthening the World Health Organization," Biden said during Tuesday’s press conference.

The two leaders, according to the joint statement after the meeting, agreed to support global affordable access to and delivery of COVID-19 vaccines, including through the COVAX Facility.

Biden at the joint presser also said the two countries have "doubled down" on efforts to tackle climate change.

"Now that the United States is back in the Paris Agreement, we intend to demonstrate our leadership in order to spur other countries to raise their own ambitions," Biden said. "To that end, we’re launching a high-level Climate Ambition… Ministerial and to align our policies and our goals, and to achieve net-zero emissions by 2050."

Biden and Trudeau vowed to tackle a range of regional and global security challenges their countries face, from military upgrades to cross-border crime.

The leaders agreed that the United States and Canada would work to modernize the North American Aerospace Defense Command (NORAD) and expand dialogue on continental security and arctic governance. The two countries, in addition, will partner against the spread of weapons of mass destruction and boost cooperation to counter China’s influence.

"Coming on the heels of the G7 meeting last Friday it was an opportunity for Prime Minister Trudeau and I to explore our bilateral partnership, to reinforce and help drive issues of concern in our hemisphere and globally, that includes coordinating our approaches to better compete with China and to counter threats to our interests and values," Biden said.

The US and Canada, he added, will work together until detained Canadians Michael Spavor and Michael Koving are released by China.

In terms of other mutual priorities, the two leaders committed to launch mechanisms to address cross-border crime and racism. Additional shared challenges, according to the roadmap, include illegal cross-border flows of firearms, drugs, organized crime, and human trafficking.

The two leaders discussed their shared concern about Russia’s alleged mistreatment of opposition figure Aleksey Navalny, allegations that Moscow has repeatedly denied. They also discussed Ukraine and reviewed the situations in Venezuela, Myanmar, Iran, Yemen, and the Middle East, according to the joint statement.