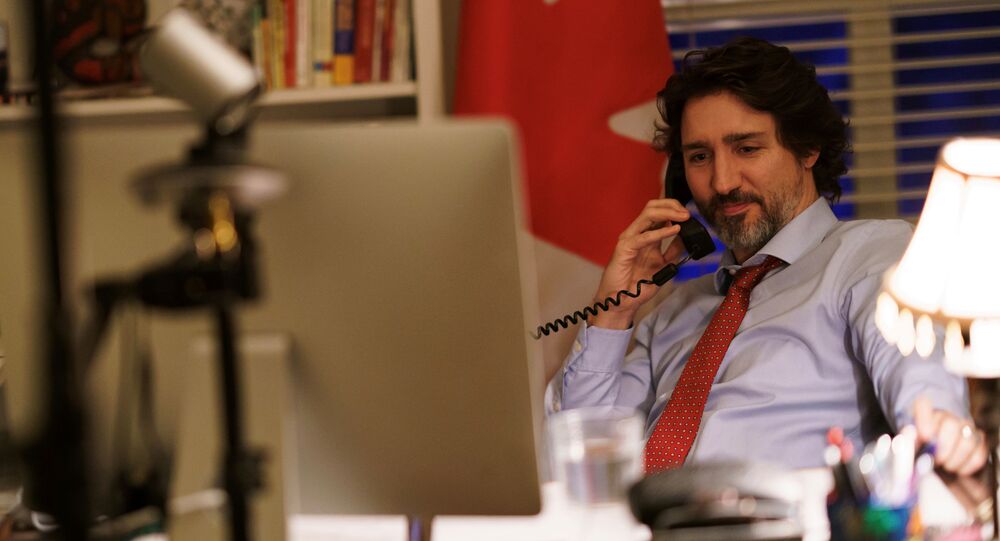 Relations between Beijing and Ottawa cooled significantly in 2018 following Canada's arrest of a senior Chinese tech company executive on behalf of the US. Tensions were exacerbated this week after Canada's parliament passed a non-binding resolution stating that China's treatment of the Uyghur minority constitutes a 'genocide'.

The United States will try to 'align with' Canada to create a common approach to the 'challenges' China poses to the two North American nations' collective interests, a US official has said, their comments cited by Reuters.

US President Joe Biden and Canadian Prime Minister Justin Trudeau are expected to sit down for Biden's first virtual meeting with a foreign head of state later Tuesday, which 'security threats' posed by China, Iran, Russia and North Korea, as well as coronavirus and climate change, expected to be among the issues raised.

Trudeau is also expected to bring up the two Canadian nationals being detained in China on espionage charges following Ottawa's detention of Meng Wanzhou, Huawei's chief financial officer, in 2018 on the basis of a US arrest warrant, with the White House said to be receptive to the idea.

"We expect the president, during the meeting, to highlight the strong and deep partnership between the United States and Canada as neighbours, friends and NATO allies," White House spokeswoman Jen Psaki had told reporters on Monday.

Ties Go From Sweet to Sour

After enjoying decades of warming relations in the latter part of the 20th century, thanks in no small measure to the diplomatic efforts of Prime Minister Pierre Trudeau, Canada and China have experienced a cooling of ties under the premiership of Trudeau's son, Justin Trudeau, with tensions first spiking after the August 2017 detention of a Canadian journalist in Xinjiang Province. In 2016 and 2017, talks on a bilateral extradition treaty and a free trade treaty faltered, and in 2018, the Trudeau government blocked the sale of a major construction company to a Chinese state-owned enterprise, sparking concerns of politically-motivated interference from Beijing.

The December 2018 arrest of Meng cooled ties further, as have Canadian officials' remarks in support of the 2019-2020 protests in Hong Kong, which China called a form of "interference" in the country's "internal affairs".

© CC BY-SA 2.0 / Tony Webster / Canadian Flag
Beijing Condemns, Rejects Canadian Parliament Motion Saying China's Treatment of Uyghurs Is Genocide
On Monday, Canada's parliament adopted a non-binding motion calling on the Trudeau government to declare the actions of Chinese authorities against the Uyghurs in Xinjiang a 'genocide', with the motion passing 266-0, although Trudeau and over 60 members of his Liberal Party were absent from the vote and had previously cautioned against the term's overuse. The motion was tabled by the opposition Conservative Party, who called on Ottawa to boycott the 2022 Winter Olympic Games in Beijing.

China denied the claims levelled against it regarding the Uyghurs, saying it "condemns and rejects" the motion.

Washington designated China's Xinjiang policy as a "genocide" in the final weeks of the Trump administration, with the Biden administration affirming its agreement with the Trump White House's characterisation of China's actions.

In January, China called on Canada and Britain to withdraw newly instituted restrictions on trade with companies from Xinjiang, accusing the two countries of imposing the restrictions under the "false pretext" of human rights violations and the use of forced labour in the western Chinese province.