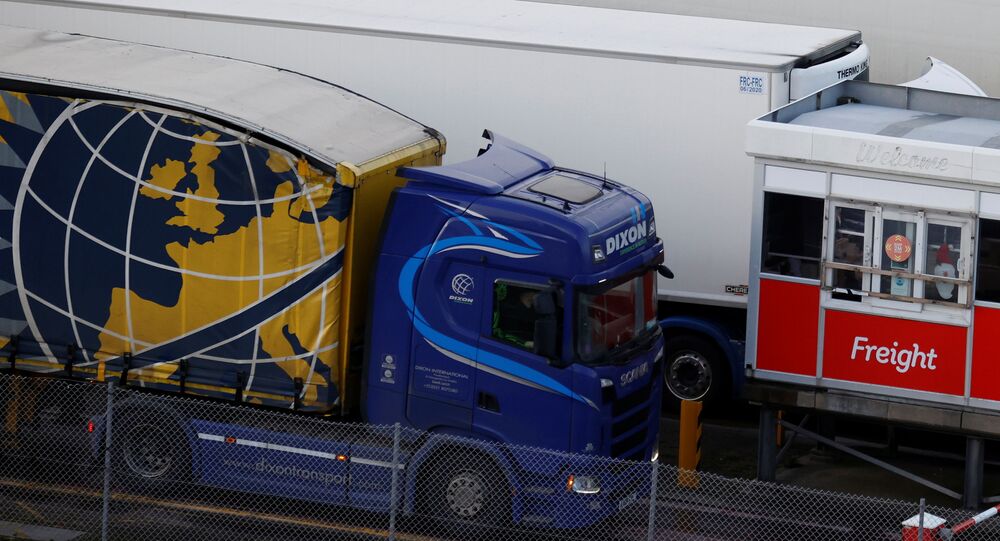 A UK-EU post-Brexit deal came into force on 1 January 2021, prompting firms across the border to adjust to the new reality, with increased custom checks, loads of paperwork and longer delivery periods.

The Republic of Ireland’s Revenue department announced this week that it would relax some customs checks for goods coming from Great Britain in a bid to avoid shortages, while slamming British exporters for not being prepared enough for additional requirements imposed by Brexit, The Independent reports.

A line of lorries willing to load ferries and cross the Irish Sea into Dublin has already been building up in England and Wales, the media reports, as hauliers were failing to complete all the necessary customs papers to export to the EU country in a timely manner.

Under the “temporary easement” introduced by the Republic of Ireland, they would now reportedly be granted “an emergency movement reference number (MRN)” to smooth things over for the time being until the process is perfected.

But the president of the Irish Road Haulage Association (IRHA), Eugene Drennan, called the measure “sticking plaster on an open wound”.

“It won’t be enough,” he told the Independent. “The UK and Irish systems are cumbersome and they aren’t talking to one another. They need to start talking. There are hundreds of trucks stuck in the UK.”

IRHA’s head believes that at least three more months are needed for partners across the Irish Sea to adjust to EU regulations and custom checks or there will be gaps in the Irish supermarkets’ shelves. IRHA argues that IT systems should be blamed for the delays, due to a lack of prior testing before 1 January, but Ireland’s Revenue department disagrees with this, mainly putting the blame for the delays on UK businesses.

“Revenue ICT systems are fully operational and stable and working as intended and thousands of customs declarations have been processed,” the department’s spokesperson said.

“For businesses who have prepared and adapted their processes in line with the new requirements, in a timely manner, they have been able to move their goods to and from Great Britain with minimal delay.”

On Friday, AFP reported that dozens of ferries have been cancelled between Britain and Ireland in the recent days following a downturn in freight traffic after the Brexit transition period had ended. Stena Line, one of the main ferry companies carrying lorries across the Irish Sea to Dublin, has experienced a 70-percent-drop in the volume of its operations in the first week of January.

© REUTERS / PHIL NOBLE
A Stena Line ferry from Dublin arrives at the port of Holyhead on the island of Anglesey, Britain, December 14, 2020

Meanwhile those drivers travelling to Northern Ireland, a country inside the United Kingdom that has remained a part of the EU’s single market to avoid a hard border with the Republic of Ireland, have also come across bureaucratic difficulties. Northern Ireland has continued to enforce EU customs regulations at its ports for goods travelling from England, Wales and Scotland, meaning hauliers are being “overwhelmed” by additional papers they have to fill in, drivers say, as large piles of them have been turned down for failing to do so correctly.

Some big British retailers, such as Debenhams, said they had to stop shipping goods to Northern Ireland from Great Britain due to additional tariffs that have been imposed for goods produced outside the EU over the “rules of origin”.

These reports contrast starkly with what was previously argued by UK Prime Minister Boris Johnson, who maintained that there won’t be a border between the Great Britain and Northern Ireland following Brexit. British companies now struggling to ship goods to NI would probably disagree with this earlier pledge.

However, some British exporters are still opting for the Northern Irish route when trying to get goods delivered to the Republic of Ireland, as they find it bureaucratically less difficult to reroute than sending bundles from Wales’ Holyhead to Dublin as before, according to the spokesman for the Road Haulage Association Paul Mummery.

“We are anticipating that despite the easements for supermarkets in Northern Ireland, given the added levels of complexity and how long it is taking stuff to get through, a lot of GB firms may look at Ireland and think it’s just not worth their while. The impact of that for Ireland is gaps on supermarket shelves,” Mummery argued.

Earlier Scottish fisherman were forced to temporarily halt their exports of seafood to the European Union due to a bureaucratic “catastrophe” that caused several delays in delivery of should-be-fresh products to the EU market amid Brexit disarray.

The United Kingdom left the European Union on 31 January 2020 and entered an 11-month transition period, in order for the two partners to agree on an overarching trade agreement to govern their future economic relations. A Brexit deal was reached on 24 December and effectively entered into force on 1 January 2021. However, British companies are still taking time to adjust to the new post-Brexit world.