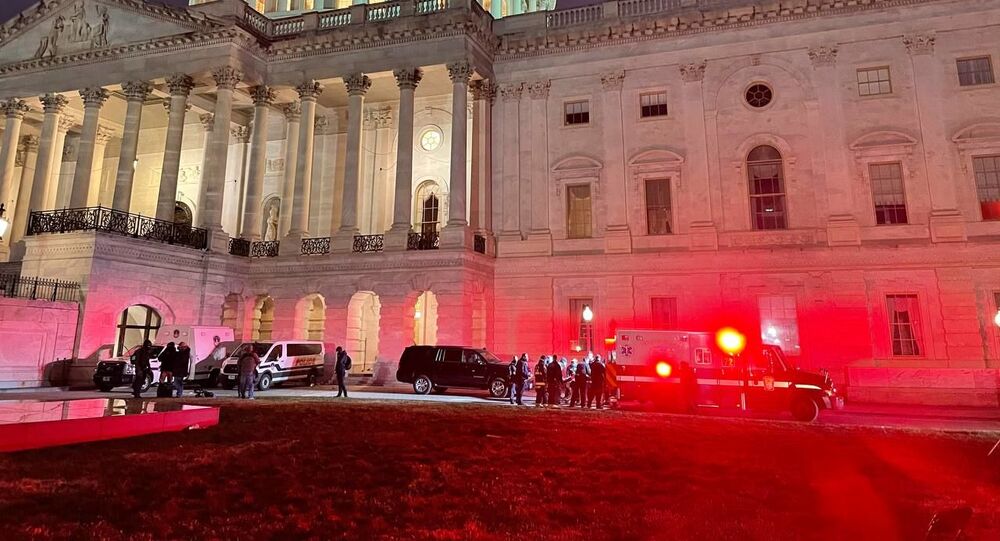 Donald Trump finally publicly acknowledged the end of his first presidential term early Thursday, pledging an "orderly transition of power" on 20 January, after Congress formally certified the Electoral College votes in favour of President-elect Joe Biden, despite the procedure being marred by violence as Trump protesters stormed the Capitol.

The extraordinary attack by Trump protesters on the symbolic epicenter of the US democracy, the Capitol, in Washington D.C., as Congress certified Democrat Joe Biden’s presidential win, was splashed all over the front pages of national and global media outlets on Thursday.

Scenes of violence that resulted in at least four people being killed rapidly escalated after Donald Trump’s supporters, opposing the results of the 2020 presidential race, breached the Capitol building as the House of Representatives and the Senate were less than an hour into their debating of the Electoral College certification process.

Scenes showing the Capitol breached for the first time since 1812 streaked across the front pages of the nation’s newspapers.

The New York Times for 7 January ran with the opening headline ‘Trump incites mob’, in a nod to the role that Donald Trump’s incendiary speech in Washington on Wednesday ostensibly played in triggering the ensuing chain of events.

​The San Francisco Chronicle had the word ‘Insurrection” straddling its front page. The outlet wrote that as the certification of the Joe Biden presidential victory got underway, a ‘violent mob encouraged by Trump’ stormed the Capitol.

​Thursday's The Washington Post went with the headline, “Trump mob storms Capitol”, as it slammed Donald Trump for ‘inciting’ crowd to ‘acts of insurrection, violence’.

​An early look at the front page of The Wall Street Journal showed the front page with the headline “Mob storms Capitol”. The outlet wrote of the delayed Biden certification as ‘political violence’ shook the nation.

Take an early look at the front page of The Wall Street Journal https://t.co/i1VtaVQq6H pic.twitter.com/p4c83YmSUI

​The Philadelphia Inquirer ran with the opening story “Incited by Trump, mob halts count”. The article describes the ‘chaos’ inside the building, posting footage of rioters ‘roaming the Capitol’ before order was restored.

For the first time since 1814, the U.S. Capitol is stormed. Take a look a Thursday's @PhillyInquirer front page. Photo by @jessicagriffin. pic.twitter.com/K6L0wnUmmQ

​Media outlets across the world also weighed in on the chaos and violence in Washington.

And some current newspaper homepages from around the world: pic.twitter.com/iplH67dljn

​French Le Monde slammed Trump as the ‘president of chaos’ who ‘thrives on divisions, violence’.

​Die Welt also ran a cover story narrating the timeline of the developments that marred the certification of the Electoral College vote tally.

​The response of world leaders as they condemned the violent scenes in Washington was covered by their respective media outlets, with UK Prime Minister Boris Johnson going on Twitter to deplore the "disgraceful scenes".

Disgraceful scenes in U.S. Congress. The United States stands for democracy around the world and it is now vital that there should be a peaceful and orderly transfer of power.

​German Chancellor Angela Merkel felt "angry and also sad" after seeing footage of the storming of the US legislature.

On Twitter, French President Emmanuel Macron decried the protesters taking up arms to “challenge the legitimate results of an election”.

​It was only after 8 p.m. that lawmakers were able to resume the procedure after the forced recess, returning to their respective chambers to resume debates, which lasted into the early hours of Thursday morning.

After the Senate and the House of Representatives voted to reject an objection to Arizona's electoral results, as well as challenges to Joe Biden’s win in Pennsylvania, President-elect Joe Biden was formally acknowledged as the winner of the 2020 presidential election in the US.

Without publicly admitting defeat, Donald Trump early Thursday morning acknowledged he will leave office and agreed to an orderly transition of power.

In a statement tweeted by a senior aide, Trump, whose own Twitter account has been temporarily locked, officially concedes there will be a presidential transition: pic.twitter.com/KB9QQqZvf0

​The inauguration of Joe Biden is scheduled to take place at noon, on 20 January.