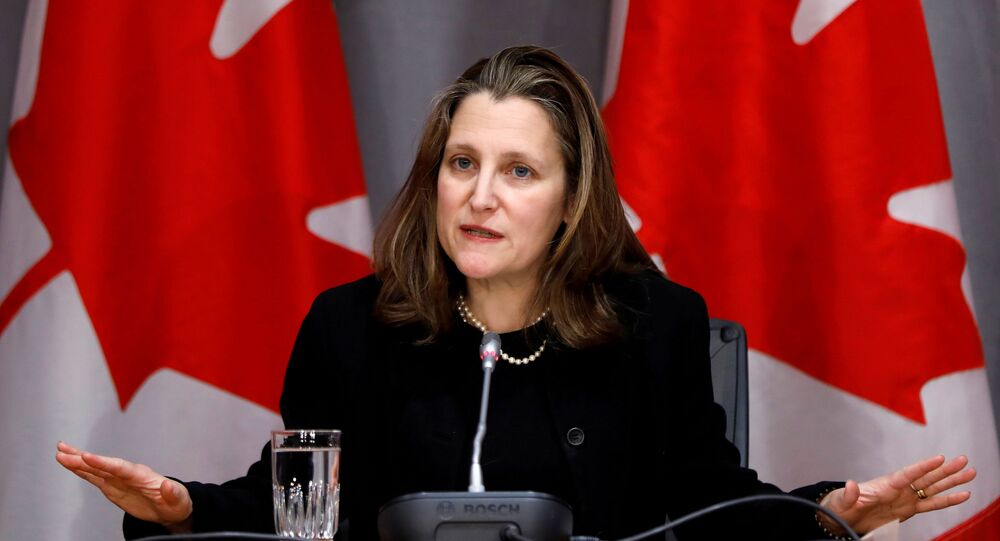 As the US holds its 2020 presidential and congressional election on Tuesday, in which Republican President Donald Trump faces off against Democratic presidential candidate and former US vice president, Joe Biden, some expect social unrest in the aftermath of the vote. Precautionary measures have been taken in many areas of the country.

Canada’s Deputy Prime Minister, Chrystia Freeland, on Tuesday, the 2020 presidential Election Day in the United States, announced that her government is working with its diplomats in Washington to ensure the safety of Canadians living in the neighbouring country in the case of post-election unrest.

During Tuesday's weekly coronavirus pandemic briefing, the deputy PM told reporters that she had discussed with Ottawa’s ambassador to Washington DC, Kirsten Hillman, the question of how to protect Canadian citizens in the US in the event of unrest after the election.

“I really would like to assure Canadians today that our government is absolutely ready and we have thoughtfully prepared for all eventualities,” Freeland said. “We have a plan no matter what happens.”

Freeland added that every Canadian government needs “to be a specialist” in dealing with events taking place in the US, noting that Ottawa will “absolutely respect the choice that the American people are making today,” and is prepared “to work effectively with whoever they choose.”

“It's a reality for Canada that every Canadian government needs to be a specialist in working with the United States and that has certainly applied to our government,” Freeland added.

The deputy prime minister reaffirmed that it was “absolutely” the government’s responsibility “to be there for Canadians outside our country and we’ll be there for them too”.

The United States is holding its 2020 presidential and congressional elections, with Republican President Donald Trump running against Democratic presidential candidate and former US vice president, Joe Biden. Some observers have warned of violence in the aftermath of Election Day, regardless of who wins. Businesses in many US cities have been reported taking precautionary measures to avoid damages from possible unrest.

The White House also fortified itself, erecting a “non-scalable” fence like that seen in June amid the Trump administration's response to the nationwide Black Lives Matter protests that rocked the country in the wake of the killing of George Floyd, a 46-year-old Black man in Minneapolis, Minnesota, at the hands of white law enforcement officers.

The Armed Conflict Location and Event Data Project (ACLED), a non-governmental crisis mapping organization, concluded in a joint report with research group MilitiaWatch that the US states of Pennsylvania, Georgia, Michigan, Wisconsin, and Oregon face the highest risk of violence by right-wing groups in the aftermath of the US elections, while North Carolina, Texas, Virginia, California and New Mexico face a more moderate risk.

Polls Open in New York City For 2020 US Presidential Election