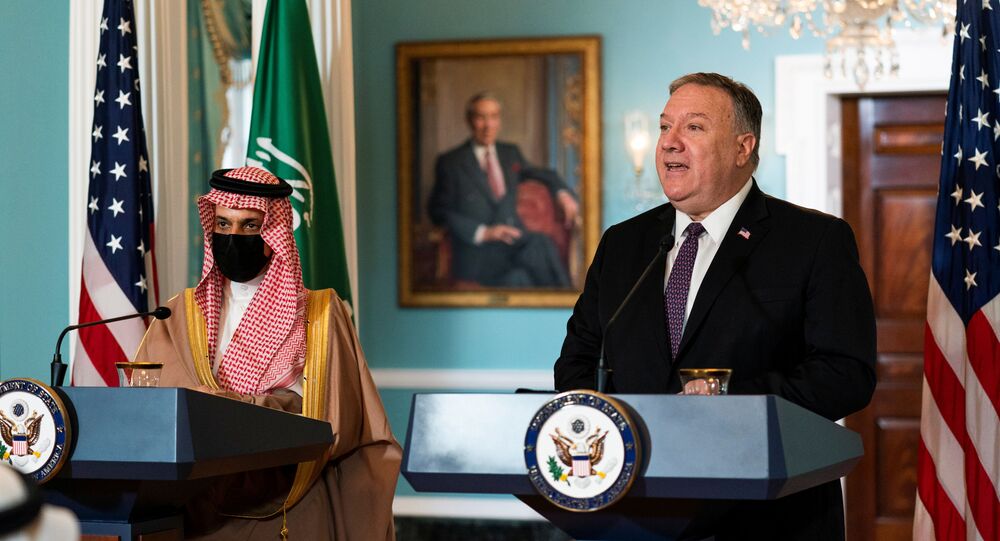 Israel, Bahrain, and the United Arab Emirates signed the Abraham Accords on 15 September after two surprise announcements by US President Donald Trump, who brokered the historic deal. The accords enabled Israel to start official cooperation in a number of spheres with the two Gulf States.

US Secretary of State Mike Pompeo has urged Saudi Arabia to follow in the footsteps of Bahrain and the UAE and normalise its relations with Israel, thus becoming the third Gulf state in history to do so. Pompeo also praised Riyadh's help in bringing Tel Aviv, Abu Dhabi, and Manama together, stopping short of revealing the nature of this support.

"We hope Saudi Arabia will consider normalising its relationships as well, and we want to thank them for the assistance they've had in the success of the Abraham Accords so far", the secretary of state said.

Pompeo expressed hope that Riyadh could play a part in convincing the Palestinian Authority or Palestinian leaders to return to negotiations with Tel Aviv in order to achieve a solution to the Israeli-Palestinian conflict. The US top diplomat further noted that the recent decisions by Abu Dhabi and Manama are indicative of the transformation the region is going through right now, suggesting that this is a reaction to the alleged threat from Iran.

Bahrain and the UAE officially established diplomatic ties with Israel by signing the Abraham Accords on 15 September in Washington, after US President Donald Trump and his administration brokered the surprise historic deal. The two countries, the first Gulf states to do so, expressed readiness to cooperate with the Jewish state in a number of fields, ranging from culture to regional security, in exchange for Tel Aviv putting its plans to extend its sovereignty over parts of the West Bank on hold.

Saudi Arabia has neither criticised nor supported the deal, which was strongly opposed by Palestinian leaders. Riyadh has so far refrained from committing itself to going down the same path, noting that it is not yet ready to make that move. Saudi Arabia was behind an initiative that Arab states should only normalise ties with Israel after Tel Aviv agrees to a two-state solution deal with the Palestinians and returns to the pre-1967 borders. The initiative was proposed in 2002; however, since then, King Salman has de facto handed over power to run the country to Crown Prince Mohammed bin Salman, who is known for his reformatory approach in terms of some domestic policy issues.