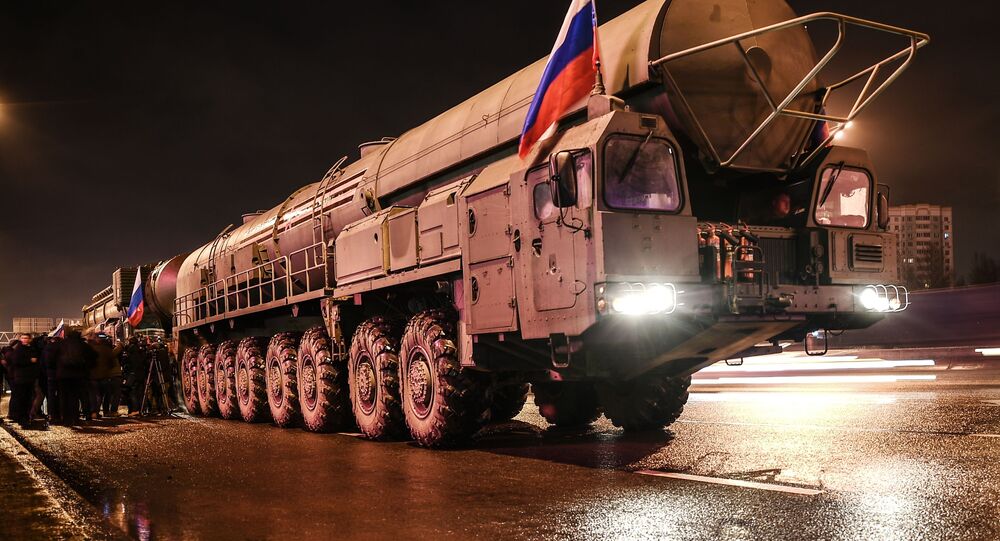 Russia Will Find Efficient Ways to Defend Itself if New START Not Extended, Envoy to UN Says

The day before, Marshall Billingslea, US special presidential envoy for arms control, said that Washington is offering Moscow to extend the New Strategic Arms Reduction Treaty (START) for less than five years in order to hammer out a new multilateral document as soon as possible.

Russia will find effective ways to protect itself if no agreement is reached with the United States on extending the New Strategic Arms Reduction Treaty (New START), Russia's ambassador to the United Nations, Vassily Nebenzia, said, stressing that Russia hopes for prolongation of the deal.

"If the deal is not extended, we will find effective ways to protect ourselves. We are certainly interested in extending the treaty, as we see it as a key element of strategic stability. We tell our US colleagues that the failure to extend it would be a great mistake," Nebenzia pledged.

Russia's UN envoy expressed the belief that Washington's intention to dismantle the entire system of arms control agreements (the country withdrew from the Intermediate‑Range Nuclear Forces Treaty last year, accusing Russia of violating the bilateral deal) could be explained by its desire to use force absolutely freely.

"This is only a part of the global problem consisting in destruction of the arms control, disarmament and non-proliferation [ADN] regimes in force. Unfortunately, we are getting more and more evidence that the US attempts to dismantle the system of relevant agreements in fact hides its desire to secure full discretion for power projection and use of force," Nebenzia said.

Russia keeps actively opposing these attempts, including within the UN, and remains open to a constructive dialogue aimed at maintaining and strengthening the global security architecture, the high-ranking official assured.

"For example, last year, the UN General Assembly [UNGA] adopted a resolution, which we initiated, in support of strengthening and developing the system of valid ADN agreements almost unanimously. It calls on UN member states to fully and strictly abide by the treaties in force, and to support their integrity," Nebenzia added.

Russia's envoy to the international organisation expressed hope that Russia's approach would be supported unanimously at this year's UNGA session as well, noting that global demand for support to arms control deals was now "higher than ever."

US Special Presidential Envoy for Arms Control Marshall Billingslea told Russian newspaper Kommersant that the New START, which is the only remaining Russian-US arms control deal in force, will not be extended if Washington and Moscow fail to conclude a relevant presidential memorandum by February.

Russia is aware that some Western servicemen and private military companies, engaged in recruiting mercenaries and sending them to Libya, are now present in the North African country, Russia's ambassador to the United Nations, Vassily Nebenzia, told Sputnik in an interview.

"We have information about Western servicemen and private military companies' presence in Libya. They engage in intelligence operations, they provide different forces in Libya with weapons and train them, they watch over facilities belonging to Western countries and companies, and they also recruit mercenaries and send them to Libya," Nebenzia said.

"So, we would recommend our Western colleagues to stop the hypocrisy and the anti-Russia media campaign, and to the UN group of experts to have a professional and unbiased approach to their job," Nebenzia added.

Claims about Russian mercenaries allegedly present in Libya, which can be found in reports by experts of the United Nations Security Council's Libya sanctions committee, are obviously just plants, based on unverified fabricated data and aimed at discrediting Moscow.

Western media outlets have repeatedly released news pieces about confidential expert reports claiming that staffers of Russia's Wagner Group and other paramilitary organizations are present in Libya for supporting forces of Khalifa Haftar.

"We have repeatedly commented on the claims about 'Russia's destructive role' in the Libyan settlement. Our Western colleagues most often cite information by a group of experts from the [UN] Security Council's 1970 committee on Libya. Remarkably, reports by this group of experts, where our country is mentioned, are 'leaked' into media all the time, despite being confidential ... We have seen this information and we can state with confidence that it is largely based on unverified or spurious data and is aimed at discrediting Russia's policy on Libya. These are obviously planted stories," Nebenzia said.

Moscow has no doubt that some anonymous sources that the experts cite are in fact from the West, the UN envoy added.

"These are the same Western countries that destroyed Libya's state system back in 2011 and provoked the crisis that is still unfolding," Nebenzia added.

Nebenzia noted that Western citizens were also mentioned in the reports, but "Western colleagues keep sidestepping it."