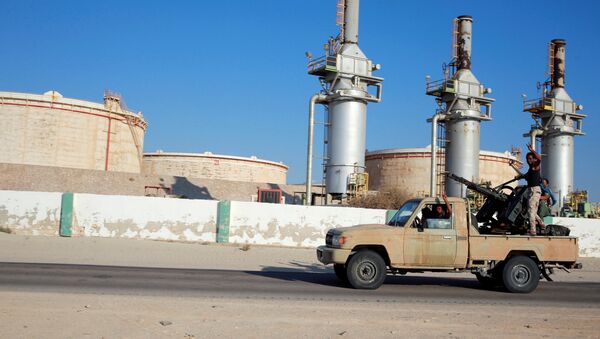 Ilya Tsukanov
All materialsWrite to the author
Protests broke out in areas loyal to both the Tripoli-based Government of National Accord in western Libya and the Tobruk-based House of Representatives government in the east amid blackouts, lack of services and poor living conditions in recent weeks. This week, both of the divided nation's rival governments announced plans to resign.

Libyan National Army commander Khalifa Haftar, whose forces pledge their allegiance to the eastern Libyan Tobruk-based government, has announced a resumption of oil production in the country, thus ending the blockade on export facilities put in place in January.

Haftar announced the resumption in a broadcast on Friday, without providing any further details, according to Reuters. Earlier, the news agency cited a source 'close to' the general confirming his plans to lift the blockade.

However, the Libyan National Oil Corporation, which accounts for some 70 percent of the country's crude output, and control of which is de-facto split between the country's two rival governments, said earlier this week that it would not lift the blockade on exports until oil facilities were demilitarized.

In June, a massive oil field in southwestern Libya announced the resumption of production after switching allegiances from the Tobruk-based government to the Tripoli-based Government of National Accord (GNA).

Libya's oil production, which exceeded 1.5 million barrels per day (bpd) before the overthrow and murder of longtime leader Muammar Gaddafi in 2011, has fluctuated dramatically in the aftermath of his death, with output reaching a stable 1 million bpd only in late 2018.

However, in early 2020, production plummeted to as little as 70,000-80,000 bpd after Haftar's forces, which control the vast majority of the country's oil export infrastructure, announced a blockade on exports amid escalating fighting with the GNA and its Turkish backers earlier this year.

The blockade has caused a dramatic decline in Libya's earnings from oil exports, and a subsequent decline in living standards, blackouts and associated problems in both the Tripoli and Tobruk-controlled areas.

On Sunday, Libya's eastern government submitted its resignation after an emergency meeting following mass protests in Benghazi and other major cities in eastern Libya. Mass demonstrations have also hit GNA-controlled cities, including Tripoli, with protesters there similarly demanding the government's resignation, improved living conditions, as well as an end to corruption. The Tripoli government recently faced criticism after security forces resorted to deploying the military against protesters.

On Wednesday, GNA Prime Minister Fayez al-Sarraj announced his intention to step down by the end of October.

Libya is home to Africa's largest proven oil reserves. Before the NATO airpower-backed operation to overthrow Gaddafi in 2011, the country was one of the wealthiest and most developed on the continent.