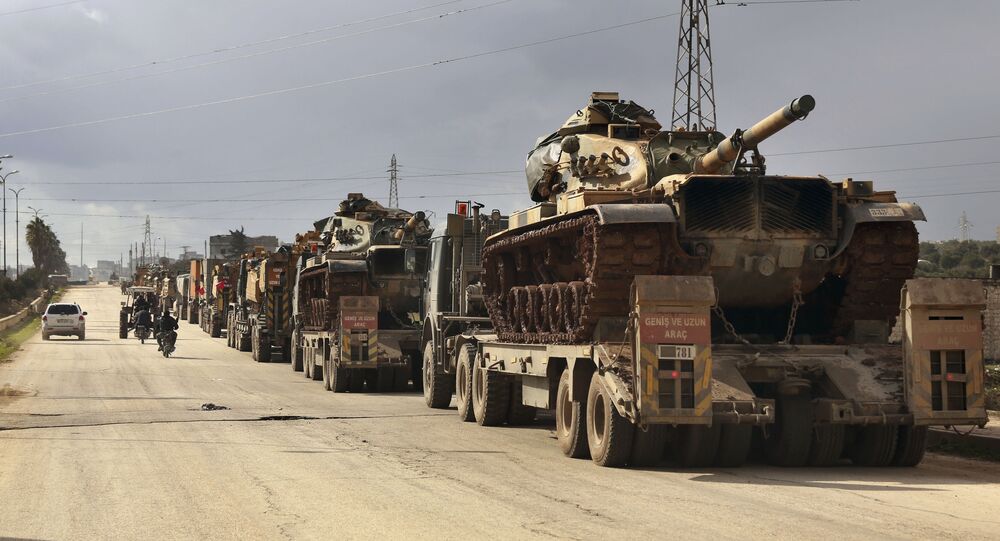 Turkey’s President Recep Tayyip Erdogan has pressured Athens to resolve the bilateral row over claims to the waters off the shore of Cyprus through dialogue, warning of "painful experiences" for Greece otherwise.

Greek deputy minister to the prime minister and government spokesman Stelios Petsas has stated that Athens could not confirm the information that Turkish tanks are being redeployed to the country's border with Greece and suggested that it could be a "propaganda" stunt by Ankara.

According to a report by Turkey's Ihlas News Agency (INA), citing military sources, Ankara has started redeploying its forces currently stationed in the south-east, on the border with Syria, moving around 40 tanks to Edirne province, bordering Greece. The agency claimed that two convoys loaded with tanks had been dispatched from the southern Hatay province for that purpose.

© AP Photo / SELCAN HACAOGLU
A Turkish army Leopard 1 tank drives through a test range at a military base near the western town of Arifiye, Turkey, Thursday, Nov. 12, 2009

At the same time, a conflicting report from Anadolu Agency (AA), citing an anonymous official, suggested that the tanks were not going to the Greek border. The redeployment of the armoured vehicles was reportedly pre-arranged some time ago and is not linked to the ongoing row between Athens and Ankara. Turkey’s Second Army, stationed in the province of Malatya, issued the order for redeployment, AA said, although it is not clear if these tanks will join the forces in the province or will go somewhere else.

The Turkish Defence Ministry has not commented on either of the conflicting reports.

The report about the possible redeployment of Turkish forces comes as the country is engaged in a row with Greece over disputed waters near Cyprus. This summer, Ankara renewed its efforts to find energy resources in an area of Cyprus' waters that it considers its exclusive economic zone. However, Athens opposes these claims and has mobilised military forces to stop Turkey's activities. Ankara has increased the level of readiness of its army, navy, and air force too.

The escalation of tensions in the eastern Mediterranean has sparked concerns that the situation could end in an armed conflict. Both countries have endorsed the idea of resolving the issue via dialogue, but an agreement to hold talks has not been reached so far. NATO Secretary-General Jens Stoltenberg announced the start of technical talks between Greece and Turkey this week, but Athens has refused to engage until Ankara withdraws its warships and exploration vessel from the disputed waters. Turkish President Recep Tayyip Erdogan has cautioned Greece against turning down a peaceful resolution to the row, vowing "painful experiences" for Athens otherwise.

Erdogan to Greece: Turkey Has Political, Military Power to 'Tear Up Immoral Maps' in Mediterranean