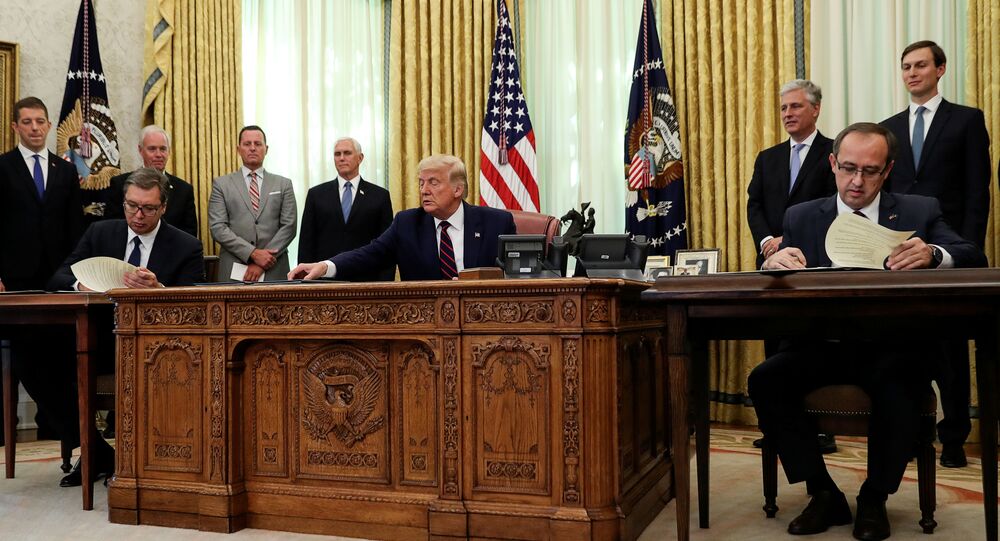 Delegations from Serbia and Kosovo have arrived in Washington for a two-day summit. According to Serbian Labor Minister Zoran Djordjevic, the parties are discussing infrastructure projects, trade, and free flow of goods, capital and people.

Serbia has committed to moving its embassy to Jerusalem, US President Donald Trump said in the Oval Office, before a meeting with the leaders of Serbia and Kosovo.

"Truly, it is historic. I look forward to going to both countries in the not too distant future", Trump said.

Trump noted that the agreement between Israel and the United Arab Emirates (UAE) has been "incredible in what it's represented what it's meant" and other countries in the Middle East are now telling the United States they want to conclude such agreements with Israel.

Trump has also commented on the matter on Twitter.

Another great day for peace with Middle East – Muslim-majority Kosovo and Israel have agreed to normalize ties and establish diplomatic relations. Well-done! More Islamic and Arab nations will follow soon!

Congratulations to @predsednikrs Vucic for announcing the move of Serbia’s Embassy to Jerusalem by July. It is a brave and historic move!

​​The Israeli prime minister's press service has announced that the Serbian Embassy will be transferred to Jerusalem before July 2021.

"Prime Minister Benjamin Netanyahu said that in continuation of the meetings held last day with the participation of the Foreign Ministry, the National Security Council and other bodies, Israel and Kosovo will establish diplomatic relations", the press service said.

#BREAKING | President @realDonaldTrump has announced that Serbia and Kosovo have agreed to economic normalization. Another historic agreement reached by this President to make the world a more peaceful, prosperous place. 🇺🇸 🇷🇸 🇽🇰

In December 2017, Trump announced that the United States would recognise Jerusalem as the capital of Israel and subsequently moved the US Embassy to the city in 2018, a decision that drew international condemnation.

Both Israel and the Palestinian Authority regard Jerusalem as their capital, and the status of the city has long been considered a matter that must be resolved through a Palestinian-Israeli peace process.

However, last month, Israel and the United Arab Emirates reached a landmark agreement, brokered by the United States, to normalise ties, which among other things entails Israel freezing its "annexation plans" in the West Bank.