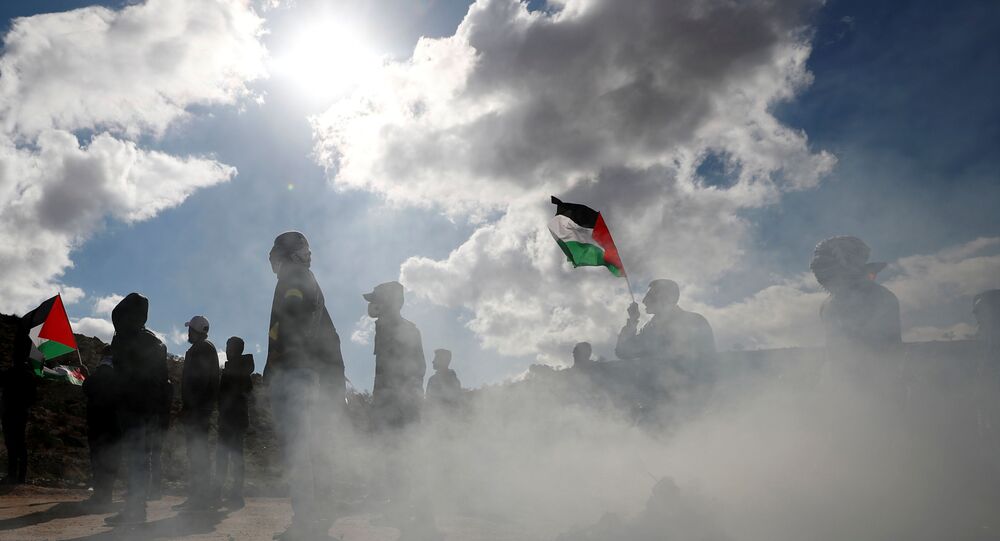 MOSCOW (Sputnik) - The US administration tried to contact the Palestinian National Authority and its leader, Mahmoud Abbas, prior to the announcement of US President Donald Trump's plan for the Israeli-Palestinian settlement, but Abbas refused to talk before the plan was unveiled, Palestinian Ambassador to Russia Abdel Hafiz Nofal said on Tuesday.

"The US administration tried to contact us two days prior [to the announcement of the deal], but we refused. On 26 January they called and not only this - Trump sent a message along with his representative. He [representative] came to Palestine with this message, but our president refused to accept this message before the deal of the century is announced and before we have any understanding about this deal", Nofal said at a press conference.

He added that no Palestinian representatives contacted the US after Trump's plan was released.

Palestine will agree to demilitarisation only if other conditions, including the creation of a fully independent Palestinian state, are met, Nofal said.

"It is not a problem for us to become a demilitarised state in the proper sense, if there is a serious agreement on the creation of two states, if all the requirements of our people are met", the ambassador said at a press conference in Moscow.

Palestinian Ambassador to Russia did not rule out on Tuesday that Russian President Vladimir Putin and Palestinian leader Mahmoud Abbas could have a separate meeting in May on the sidelines of the events dedicated to the 75th anniversary of WWII on Victory Day in Moscow.

"Perhaps, but so far there is no clarity," Nofal said in response to a question on whether a Putin-Abbas meeting was planned for May.

The diplomat also confirmed that visiting Moscow for the Victory Day anniversary was on Abbas’ agenda.

The ambassador said that the PNA has condemned the recent meeting between Israeli Prime Minister Benjamin Netanyahu and the head of Sudan’s sovereign council, Gen. Abdel Fattah Burhan, in Uganda, but added that Sudan, together with other Arab countries, still did not back the so-called deal of the century proposed by US President Donald Trump to settle the ongoing Israeli-Palestinian conflict.

"We condemn and are surprised that the meeting was held. Sudan is allegedly seeking the lifting of UN Security Council sanctions, on the other hand, the foreign ministry [of Sudan] said that they did not know about the meeting", the ambassador said at a press conference in Moscow.

The ambassador added that during the recent meeting of Arab League foreign ministers, the top Sudanese diplomat condemned the US peace plan.

On Monday, during Netanyahu's state visit to Uganda, the two officials agreed to begin cooperation in restoring and normalizing relations between the two countries, which do not currently have diplomatic ties. At the same time, the Sudanese transitional government announced that it was not informed about the meeting and only learned about it via media reports.

On 28 January the US president revealed his Middle East peace plan to resolve the conflict between Israel and the Palestinians via a two-state solution.

© Infographics
Deal of the Century: What is Trump's Plan for Israel and the Palestinians?

Under the plan, Israel would annex settlements in the West Bank and Jordan Valley and keep Jerusalem as its "undivided capital." The peace plan envisions that the Palestinians would double the land they currently hold and receive $50 billion in investment to spur the Palestinian economy. However, Palestinian refugees would not be permitted to return to their land.

While Israeli Prime Minister Benjamin Netanyahu praised the peace plan, the Palestinian leaders have said they outright reject it. Palestinian President Mahmoud Abbas is scheduled to meet with the UN Security Council on 11 February to mobilise opposition to the peace plan.