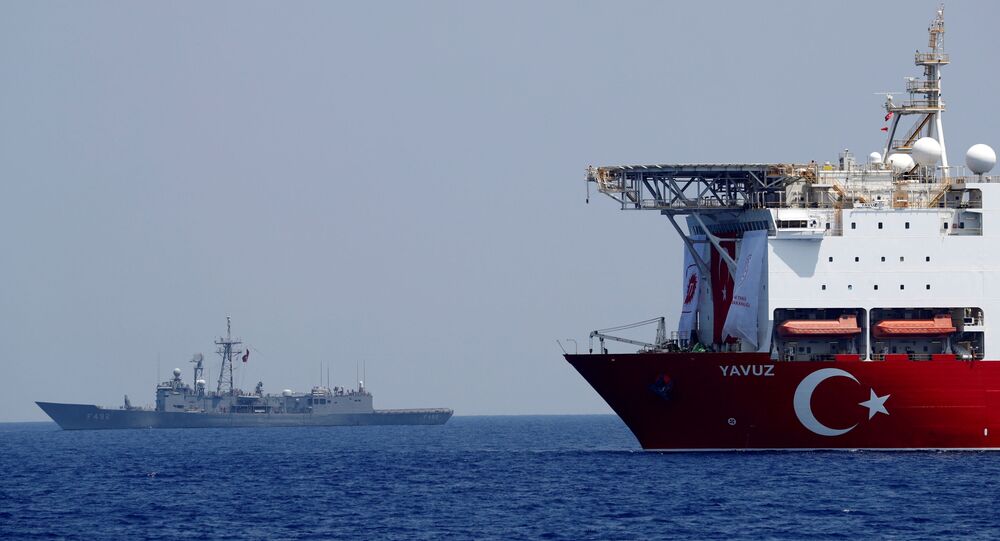 'Policy of Appeasement': Cyprus Criticises EU Partners for a Lack of Response to Turkey's Drilling

Turkey has been at odds with Greece and Cyprus over its gas exploration plans as the two countries reject Ankara’s claims to mineral rights in the Eastern Mediterranean. The EU supports Athens and Nicosia but has stopped short of introducing sanctions against Turkey.

The Cypriot government criticised the European Union over its “policy of appeasement” and lack of steps in deterring Ankara, after Turkey announced on Sunday that its Yavuz ship would continue its drilling operations in parts of the Eastern Mediterranean region claimed by Cyprus.

Speaking to reporters on Monday, Cypriot government spokesman Kyriakos Koushios said that his country was witnessing “a diffidence from the European Union in taking on a substantive role and adopting policies of deterrence”.

“The policy of appeasement and the messages of support are not enough to discourage Turkey from its illegal actions”, the spokesman noted, as quoted by Reuters, arguing that the EU should have a “more intense” presence in the Eastern Mediterranean.

His comments follow Greece’s failure to get EU nations on board to introduce sanctions against Turkey for carrying out exploration operations in areas where Athens also claims jurisdiction.

Both Cyprus and Greece have been competing with Turkey over claims to gas reserves in the Eastern Mediterranean.

Turkey is the only state in the world that recognizes the Turkish Republic of Northern Cyprus following the country’s division in 1974. It maintains that the island's resources should be shared and believes that the Greek Cypriot government’s exploration efforts fail to represent the interests of Turkish Cypriots in the north. Following these claims, last year Turkey stepped up its gas drilling activities to the west of Cyprus; operations that have widely condemned by Nicosia and international community. On Sunday, the Turkish government announced that its Yavuz drilling ship would continue its exploration efforts in the disputed area until mid-September.

Greece, which supports Cyprus’ exclusive claims to the territorial waters around the islands, has also been at loggerheads with Turkey over competing claims in the Aegean Sea and territorial waters south of the Turkish city of Antalya and west of Cyprus.

In July, Ankara announced that it was sending its Oruc Reis research ship to waters off the Greek island of Kastellorizo which is located just 2 km from Turkey’s coast. Athens maintains that these exploration activities are illegal as they encroach on its continental shelf. But the Turkish authorities disagree, insisting last month that “islands that are far from the mainland and closer to Turkey cannot have a continental shelf”.

Following a strong condemnation from the European Union and attempts to mediate the conflict between the two nations, Turkey initially halted its exploration plans. But later Turkish President Recep Tayyip Erdogan announced that the country was resuming gas drilling, while accusing Greece of "failing" to keep its promises to cease operations in the region.

On 10 August, Turkey's Oruc Reis research vessel began its search for hydrocarbon reserves. This drew a strong response from Athens, which pledged to protect the country’s sovereignty by all means necessary, while putting its armed forces on “high alert”.

Both the European Union and the United States have called for sanctions against Turkey if its vessels continue operating in the disputed waters of Eastern Mediterranean. However, their resolve has not gone any further than statements so far.