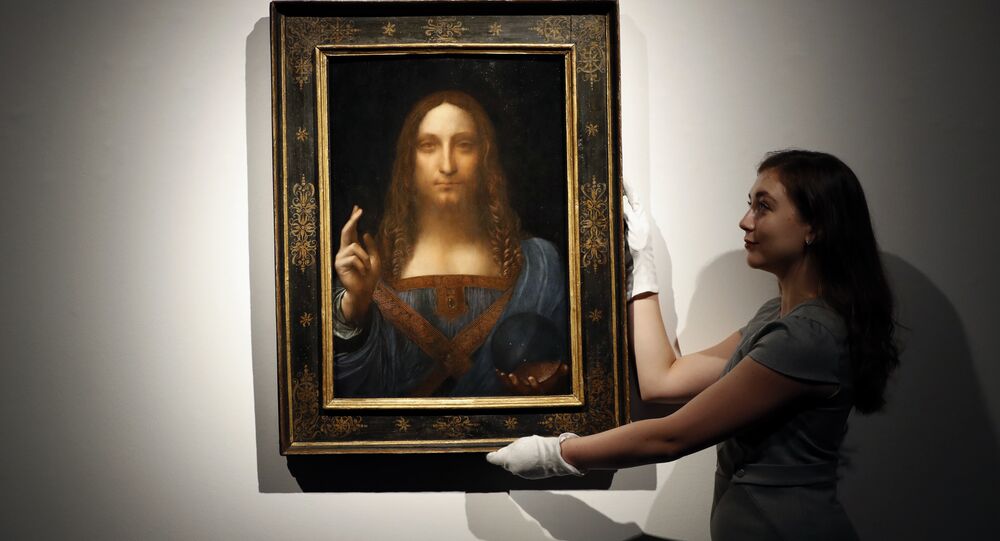 Salvator Mundi, a famous painting attributed to Leonardo da Vinci and depicting Jesus clad in Renaissance dress became the most expensive painting ever sold after fetching a price of around $450.3 million at Christie’s in 2017.

A finger of suspicion has been pointed at “Salvator Mundi”, a mysterious art masterpiece attributed to the great Italian painter Leonardo da Vinci.

The painting depicts Jesus with long golden brown hair, dressed in blue robes, giving a benediction with his raised right hand, while in his other hand he holds a clear orb of glass or crystal.

Dubbed the world’s most expensive artwork after it sold for a staggering $450.3 million (£342 million) in 2017 at Christie’s in New York, allegedly to buyers acting on behalf of Saudi crown prince Mohammed bin Salman, the painting has sparked concerns about its origins.

Art expert Jacques Franck believes it is a “workshop Leonardo” created by two of the artist’s assistants.

In an essay for the journal ArtWatch UK, the French historian insists that the fingers of Christ’s right hand which are held in the sign of the cross do not display Da Vinci’s unmistakable anatomical precision.

“When the index and the middle finger are raised fully, one cannot bend the other fingers inside the palm extensively as observed in the Salvator Mundi’s blessing hand. It is therefore an unlikely movement,” says the expert.

Furthermore, too much of the fingernail on the hand is shown, believes Franck, pointing out that Da Vinci would have been aware of this detail.

The renowned Italian would also have been unlikely to paint “the oddly long and thin nose, the mechanical hair ringlets, the flat orb and the over-shadowy neck”.

Franck suggests that two artists who worked alongside Da Vinci - Salai and Baltraffio – might have created the painting, which has often been dubbed the ‘male Mona Lisa’.

​Echoing the suspicions, Michael Daley, the Director of ArtWatch UK, was quoted as saying:

The painting attributed to the illustrious sculptor and painter was billed by Christie’s in New York as “the last da Vinci” and broke a record when it sold for $450 million in 2017, with the buyer’s identity shrouded in secrecy.

The auctioneers and other experts insisted the artwork was a genuine Da Vinci work, with Christie’s stating that the auction house stands “by the thorough research and scholarship that led to the attribution of this painting in 2010”.

However, rumors have circulated abut its authenticity for some time.

The artwork sold for just $10,000 at an estate sale in 2005 when it was deemed a copy of a lost Leonardo work, but was extensively restored by conservator Dianne Dwyer Modestini in New York City.

After authenticators determined that underneath was seemingly a painting by the Old Master himself, it was put up for auction and touted as “the greatest and most unexpected artistic rediscovery of the 21st century.”

Art historians tend to agree that Salvator Mundi was painted circa 1500, during the time that Leonardo da Vinci’s patron was King Louis XII of France.

The painting supposedly belonged to England’s Charles I in the 17th century but disappeared until the 20th century. In 1958, when it was auctioned by Sotheby’s in London, and back then was first attributed to Boltraffio, who worked in Leonardo’s studio.

The mystery of the artwork’s origins continues to generate fascination, with skeptics claiming Leonardo da Vinci could not have been responsible for “anything so dull,” while others are certain that the brushwork belongs to none other than Leonardo da Vinci.