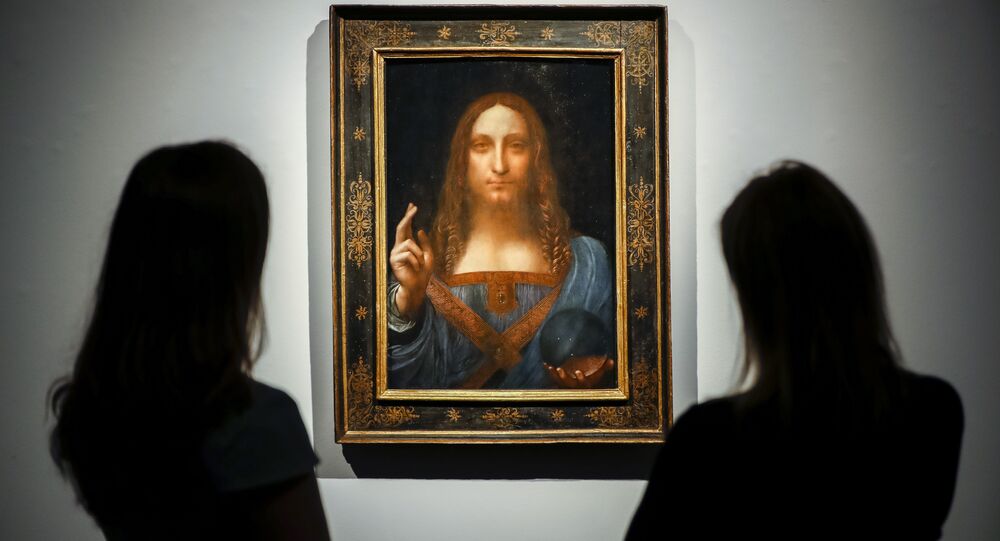 If displayed at the Louvre as the work of “Leonardo’s workshop” rather than the work of Leonardo da Vinci himself, the painting’s value would likely tumble while its owners would be left humiliated.

Salvator Mundi, a famous painting depicting Jesus clad in Renaissance dress, which was previously attributed to Leonardo da Vinci himself and became the most expensive painting ever sold after fetching a price of $450.3 million in 2017, is unlikely to be shown to the public during an upcoming artist’s retrospective at Louvre in Paris due to concerns about the artwork’s origins, the Telegraph reports.

© AP Photo / Kirsty Wigglesworth
Da Vinci's Painting of Jesus Mysteriously Vanishes in the Middle East – Report
As the newspaper explains, the museum’s curators apparently agreed to label the painting as "from the workshop" of Leonardo, which would have a detrimental effect on the artwork’s price and possibly humiliate its current owners.

"The Louvre Paris have asked the Louvre Abu Dhabi if they could borrow it for their exhibition — that's official. But my inside sources at the Louvre, various sources, tell me that not many Louvre curators think this is an autograph [real] Leonardo da Vinci and if they did exhibit it, they really want to exhibit it as 'workshop'", said art historian Ben Lewis.

According to Lewis, the painting is very unlikely to appear on display at the French museum because if it were to be exhibited there as “Leonardo workshop”, its price would plummet to somewhere north of $1.5 million.

"If a picture cannot show its face, that is really damning for the art world", he remarked.

In September 2017, the painting was expected to go on display at the Louvre Abu Dabi, but the artwork’s unveiling was suddenly cancelled “without explanation”, with The New York Times reporting earlier this year that the Louvre in Paris has been unable to locate the painting.

Commenting on this development, Lewis said he thinks that the owners of the painting were “put off by experts who have expressed doubt about the painting’s authenticity”.

Christie’s, however, insisted that Salvator Mundi is the work of Leonardo, stating that the auction house stands “by the thorough research and scholarship that led to the attribution of this painting in 2010”.