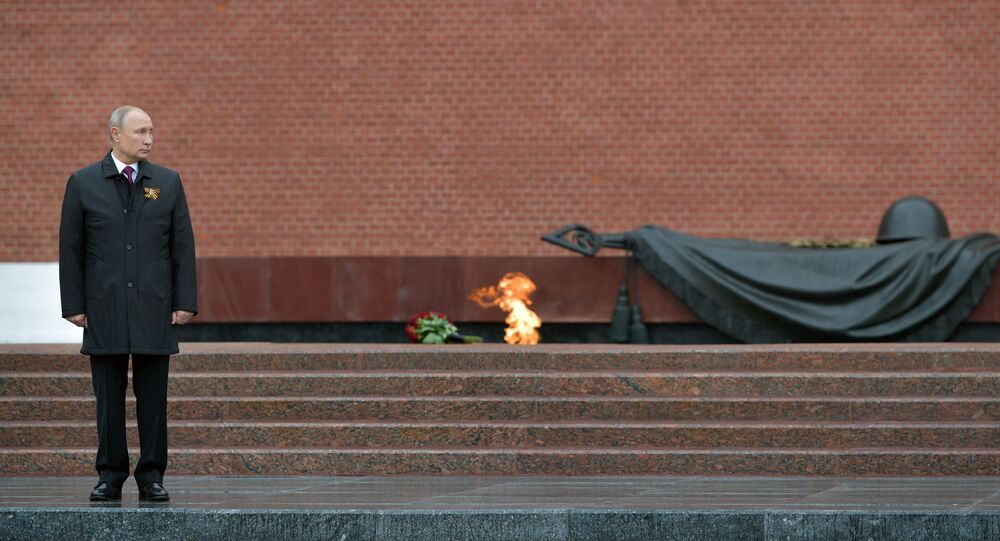 World War II ended in 1945 with the victory of the Soviet Union and its allies. Pondering over the "real lessons" of the 75th Anniversary of defeating Nazism, Russian President Vladimir Putin has written an article for the US magazine National Interest.

In an article for US magazine National Interest "The Real Lessons of the 75th Anniversary of World War II", Russian President Vladimir Putin reflected on the historical, cultural and political aspects of the World War II legacy, outlining the contribution of the Soviet Union's Red Army to defeat Nazism, analyzing modern understanding and interpretations of the historical event, and considering the challenges now facing the world.

Here are some of the highlights of the Russian President's article.

Soviet Union Role in the Victory Over Nazism

The Soviet Union and the Red Army made the crucial contribution to the defeat of Nazism, despite modern attempts to underplay this truth, Putin said in the article.

"The Soviet Union and the Red Army, no matter what anyone is trying to prove today, made the main and crucial contribution to the defeat of Nazism," Putin's article said. "These were heroes who fought to the end surrounded by the enemy at Bialystok and Mogilev, Uman and Kiev, Vyazma and Kharkiv. They launched attacks near Moscow and Stalingrad, Sevastopol and Odessa, Kursk and Smolensk. They liberated Warsaw, Belgrade, Vienna and Prague. They stormed Koenigsberg and Berlin.

Putin went on to note that the Nazi attack was "truly unprecedented in terms of its destructive power", which forced the Soviet Union to face "the strongest, most mobilized and skilled army in the world".

"The war did not come as a surprise, people were expecting it, preparing for it. But the Nazi attack was truly unprecedented in terms of its destructive power. On June 22, 1941, the Soviet Union faced the strongest, most mobilized and skilled army in the world with the industrial, economic and military potential of almost all Europe working for it," Putin wrote.

On the whole, the Soviet Union accounted for about 75 percent of all military efforts undertaken by the anti-Hitler coalition, Putin stressed.

"Let me cite you another document. This is a report of February 1954 on reparation from Germany by the Allied Commission on Reparations headed by Ivan Maisky. The Commission's task was to define a formula according to which a defeated Germany would have to pay for the damages sustained by the victor powers. The Commission concluded that 'the number of soldier-days spent by Germany on the Soviet front is at least 10 times higher than on all other allied fronts. The Soviet front also had to handle four-fifths of German tanks and about two-thirds of German aircraft,'" Putin said.

During the war period, the Red Army "ground up" 626 divisions of the Axis states, of which 508 were German, he said. Putin also recalled that The Soviet Union also suffered the hardest losses in that war.

"Almost 27 million Soviet citizens lost their lives on the fronts, in German prisons, starved to death and were bombed, died in ghettos and furnaces of the Nazi death camps. The USSR lost one in seven of its citizens, the UK lost one in 127, and the USA lost one in 320. Unfortunately, this figure of the Soviet Union's hardest and grievous losses is not exhaustive", he noted.

Praising Soviet leadership during the WW2 period, Putin outlined their understanding of the outside threats of the time, also commenting on accusations addressed to "Stalin and his entourage".

"Stalin and his entourage, indeed, deserve many legitimate accusations. We remember the crimes committed by the regime against its own people and the horror of mass repressions. In other words, there are many things the Soviet leaders can be reproached for, but poor understanding of the nature of external threats is not one of them. They saw how attempts were made to leave the Soviet Union alone to deal with Germany and its allies," Putin wrote.

Citing the historical role of the Soviet people's contribution to the victory, Putin warned against historical revisionism observable in the West, particularly when it comes to WW2 outcomes, as it muddles the understanding of the creation of the peace mechanisms.

"Historical revisionism, the manifestations of which we now observe in the West, and primarily with regard to the subject of the Second World War and its outcome, is dangerous because it grossly and cynically distorts the understanding of the principles of peaceful development, laid down at the Yalta and San Francisco conferences in 1945," his article said.

Commenting on the European Parliament's resolution attributing the responsibility for starting World War II to the Soviet Union on par with Nazi Germany, Putin related them to "politically-motivated statements that are aimed at provoking scandal and are fraught with threats".

"Many of our partners are not yet ready for joint work. On the contrary, pursuing their goals, they increase the number and the scope of information attacks against our country, trying to make us provide excuses and feel guilty, and adopt thoroughly hypocritical and politically motivated declarations," Putin wrote.

The Russian president referred, in particular, to a resolution on the Importance of European Remembrance for the Future of Europe approved by the European Parliament on 19 September, 2019, in which the Soviet Union was accused of sharing the responsibility with Nazi Germany of unleashing the Second World War, while the so-called Munich Betrayal — a 1938 agreement among Adolf Hitler and the leaders of Germany, France and Italy on the factual partition of Czechoslovakia — was omitted altogether.

"I believe that such ‘paperwork' – for I cannot call this resolution a document – which is clearly intended to provoke a scandal, is fraught with real and dangerous threats," Putin insisted.

He reminded that the Soviet Union gave a legal and moral assessment of the so-called Molotov–Ribbentrop Pact, denouncing in 1989 the secret protocols as "an act of personal power" which in no way reﬂected "the will of the Soviet people who bear no responsibility for this collusion."

"Yet other states have preferred to forget the agreements carrying signatures of the Nazis and Western politicians, not to mention giving legal or political assessments of such cooperation, including the silent acquiescence – or even direct abetment – of some European politicians in the barbarous plans of the Nazis," he said. "Besides, we do not know if there were any secret 'protocols' or annexes to agreements of a number of countries with the Nazis. The only thing that is left to do is to take their word for it."

Urging for joint cooperation in historical research of the World War II, Putin called on all states to follow Russia and make their WW2 archives public and uncover previously unknown documents.

"In particular, materials pertaining to the secret Anglo-German talks still have not been declassified. Therefore, we urge all states to step up the process of making their archives public and publishing previously unknown documents of the war and pre-war periods – the way Russia has done it in recent years. In this context, we are ready for broad cooperation and joint research projects engaging historians," Putin appealed.

Putin expressed hope that a Moscow-proposed summit of the five permanent UNSC members would take place as soon as possible.

"Our colleagues – Mr. Xi Jinping, Mr. Macron, Mr. Trump and Mr. Johnson – supported the Russian initiative to hold a meeting of the leaders of the five nuclear-weapon States, permanent members of the Security Council. We thank them for this and hope that such a face-to-face meeting could take place as soon as possible," Putin wrote in his article.

The Russian president offered that the UN system experiences certain tensions and the UN Security Council is now not as effective as it could be, but it still performs its main function of preventing large-scale conflicts.

"Of course, we can see that the UN system currently experiences certain tension in its work and is not as effective as it could be. But the UN still performs its primary function. The principles of the UN Security Council are a unique mechanism for preventing a major war or global conflict", the Putin said.

Referring to the Moscow-hosted summit, Putin promised that it would help members to find a common ground on contemporary challenges and threats.

"There can be no doubt that a summit of Russia, China, France, the United States, and the UK can play an important role in finding common answers to modern challenges and threats, and will demonstrate a common commitment to the spirit of alliance, to those high humanist ideals and values for which our fathers and grandfathers were fighting shoulder to shoulder [during World War II]," the article read.