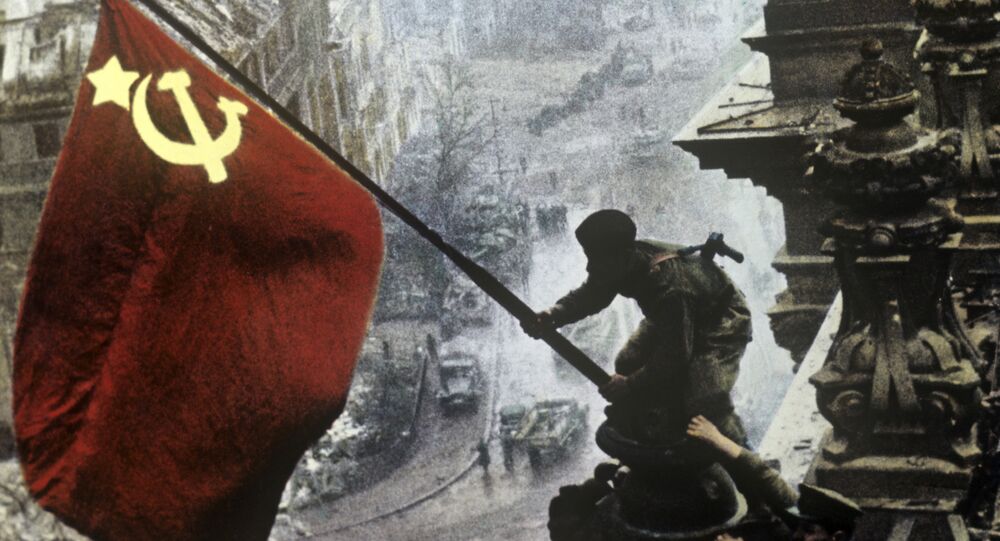 VE Day 75: Why Eisenhower Overruled the British and Let the Red Army Win the Race to Berlin in 1945

On 8 May 1945 the Allies accepted the surrender of Admiral Karl Dönitz, who had taken over as Germany’s head of state following Adolf Hitler’s death. It brought to an end the Second World War.

Britain, France, Russia and the United States are all celebrating the 75th anniversary of the end of the Second World War on Friday, 8 May.

Victory in Europe (VE) Day - as it is known in Britain - marks the moment when the British Empire, liberated France, the US and the Soviet Union accepted Germany’s unconditional surrender after six years of brutal warfare.

Japan would fight on for another three months before it too surrendered.

A week before the final victory Hitler had committed suicide in his bunker in Berlin - along with his girlfriend Eva Braun - as Red Army soldiers closed in on it.

But did the US commander, General Dwight D. Eisenhower overrule British objections and deliberately let the Soviets reach the German capital first for political reasons?

We owe an enormous debt of gratitude to the greatest generation

I know the nation will come together to mark this historic occasion - get involved 👇https://t.co/Obm7y18KFp pic.twitter.com/EYwxwUX19B

​Or did he know the battle for Berlin - Hitler’s last stand - would be savage and chose to let the Red Army take the casualties rather than US or British forces?

In September 1944, with the Red Army still outside Warsaw, Eisenhower had been confident of reaching Berlin before them but by February 1945 the Soviets had surged westwards and were within artillery range of the capital.

In February 1945 Stalin, Roosevelt and Churchill had met in the Crimean city of Yalta and agreed to divide up occupied Germany between the four main allies.

The fifth ally - Canada - had no interest in a German zone.

The US would control Bavaria and the south, France would occupy Saarland and the west, Britain would have the Ruhr valley and the north and the Soviet Union would control most of the Baltic coast and the east.

Berlin would be in the Soviet-controlled territory but would be divided into four zones, each controlled by one of the victorious allies.

In March 1945 the British commander, Field Marshal Bernard Montgomery reportedly had a furious row with Eisenhower over the final war strategy.

​Monty, as he was nicknamed by the British press, had just crossed the Rhine and expected to be given command of the US Ninth Army as well as his own 21st Army Group and all the fuel he needed to speed 250 miles across the flat north German plains to capture Berlin.

But Eisenhower overruled Montgomery, and British Prime Minister Winston Churchill, who also wanted the kudos of capturing the Nazi capital.

On 28 March Eisenhower cabled the US military liaison officer in Moscow and asked him to pass on a message to Stalin.

Eisenhower’s secret message said he intended to encircle the Ruhr valley and then “divide the enemy’s remaining forces by joining hands with your forces. For my forces, the best axis on which to effect this junction would be Erfurt-Leipzig-Dresden.”

​But he made no mention of Berlin, which was another 120 miles north-east of Leipzig.

Eisenhower reportedly said: ''Berlin is only a political objective, not a military objective.''

On 12 April, with Montgomery only 60 miles west of Berlin, US President Franklin D. Roosevelt died, and a new commander-in-chief, Harry Truman, took over in the White House.

© Wikipedia
Stalin, Truman and Churchill at the Potsdam conference in July 1945

Truman was to be the first Cold War president but in April 1945 relations between Moscow and Washington were still cordial as there was still a common enemy - Nazi Germany.

Truman was happy to give Stalin the propaganda coup of taking Berlin, even if it was by then just a bombed out hulk with its Reich ministries already evacuated.

Happy Hitler Death Day!
30th of April 1945.
75 years gone, and not missed for a moment. pic.twitter.com/zEMOSAwkFh

​The Red Army had been pushing the Germans back on the Eastern Front ever since February 1943 when Field Marshal Friedrich Paulus surrendered at Stalingrad.

Joseph C. Harsch, who covered the war for the Christian Science Monitor newspaper, wrote an article in 1995 in which he recounted being part of a group of reporters who visited Eisenhower’s headquarters in the French city of Rheims on 15 April and asking him: “Why stop on the Elbe? Why don't you reach for Berlin?''

Harsch wrote that Eisenhower had consulted his field commanders, who had given him conflicting advice - General Omar Bradley estimated it would cost 100,000 casualties to capture Berlin, while General George Patton was more upbeat and said: ''We had better take Berlin, and quick.''

Harsch wrote: “Lieutenant General William Simpson, in command of the US Ninth Army, had reached the Elbe at Magdeburg on 11 April and secured two bridgeheads. On 14 April he asked General Bradley for permission to go on to Berlin. Bradley relayed the request to Ike. Ike said a firm ‘No’.''

In his memoirs General Bradley wrote: "As soldiers we looked naively on the British inclination to complicate the war with political foresight and non-military objectives'."

In the National Archives in London is a copy of a telegram sent by the British Prime Minister, Winston Churchill, to the US Secretary of State, Edward Stettinius on 18 April 1945.

In it Churchill writes: "It would seem that the Western Allies are not, repeat not, immediately in a position to force their way into Berlin. The Russians have two and a half million troops on the section of that front opposite that city."

Churchill tells Stettinius that 25 American divisions "were covering an immense front" and said both the northern and southern flanks were preoccupying General Eisenhower.

The Prime Minister says “it is thought important” Field Marshal Montgomery takes the Baltic port of Lübeck as soon as possible and he adds: “Our arrival at Lübeck ahead of our Russian friends from Stettin (what is now Szczecin in Poland) would save a lot of argument later on."

Churchill goes on to stress that by taking Lübeck it would block the Red Army from occupying Denmark and he then discusses the importance of seizing a key region south of Stuttgart.

“In this region are the main German installations connected with their research into T.A. and we had better get hold of these in the interests of the special secrecy attached to this topic,” wrote Churchill in a heavily coded passage.

T.A. stood for Tube Alloys, the British codeword for the development of atomic weapons.

With the Western Allies preoccupied in northern and southern Germany, two Soviet commanders - Marshal Georgy Zhukov and General Ivan Konev - approached Berlin in a pincer movement, both eager to be the first to present Stalin with the prize of the German capital and the Fuhrer’s body.

As the Red Army pincers squeezed Berlin the man who founded the Third Reich - which was supposed to last a thousand years - finally took the coward’s way out only 12 years after he became Germany’s leader.

When Dönitz took over from Hitler he had almost immediately began to prepare for a formal surrender.

On 7 May 1945 Dönitz ordered a German delegation to go to Eisenhower's headquarters in Rheims, where they signed the surrender documents.

As part of that agreement 1,800,000 German troops - 55 percent of the army still fighting on the Eastern Front - surrendered to British or US forces, rather than the Red Army.

In 1946 Dönitz was convicted of war crimes and jailed for 10 years at the Nuremberg trials.

He was released from prison in 1956, wrote two volumes of memoirs and died of a heart attack in what was then West Germany in 1980.

But the "race for Berlin" in 1945 left a lasting legacy on politics and history.

Eisenhower’s decision to gift Berlin to the Soviets was harshly criticised by Cold War hawks and, writing in Airforce magazine in 2013, John T. Corell wrote: "It dogged him in his run for the presidency in 1952 and still pops up occasionally in theories that Ike’s failure to take Berlin delivered the city into Soviet hands."

Despite the critics, Eisenhower was elected President and took over in the White House shortly before Stalin died.