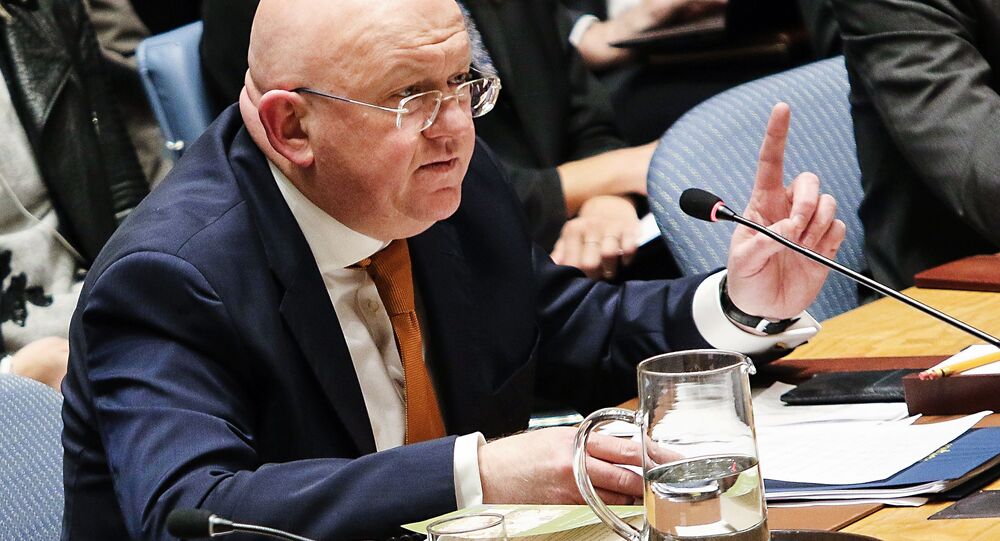 As the October deadline to end the functioning of the UN Security Council arms embargo against Iran approaches, the Trump administration has attempted to extend the restrictions, threatening new sanctions and even making the legal case that the US is still a party to the Iran nuclear deal, despite withdrawing from the agreement in 2018.

Russia sees no reason to extend the UN Security Council’s arms embargo against Iran, and the United States’ recent arguments in favour of doing so are “ridiculous,” Russian Ambassador Vasily Nebenzya has announced.

“Exactly two years ago, on May 8, 2018, the United States proudly announced that it was withdrawing from the Joint Comprehensive Plan of Action nuclear deal, and closed the door behind them. Now, they’re knocking on that door and saying ‘wait a second, we forgot to do one little thing related to the JCPOA. Let us back in and then leave again.’ This is ridiculous,” Nebenzya said, speaking to reporters by video linkup on Tuesday.

“I do not see any reason why an arms embargo should be imposed on Iran,” Nebenzya stressed. “Technically the [UN restrictions] were not even an embargo, but a kind of quota on the purchase of armaments. These restrictions will expire on October 18, and that’s it. For us this is clear.”

The Russian ambassador’s remarks come in the wake of a spate of statements by Trump administration officials pushing for the extension of the arms embargo against Iran as the deadline for its termination nears.

In late April, Secretary of State Mike Pompeo claimed the US had the legal authority to work to extend the ban on conventional arms sales to Iran under Resolution 2231, despite abandoning the Iran nuclear deal to which that resolution is linked in 2018. Similarly, US Special Representative for Iran Brian Hook has said that Russia and China have no reason to use their veto power to prevent the prolongation of the embargo. Russian officials have repeatedly stressed that as far as Moscow is concerned, the Iran arms embargo issue is “closed.”

Last week, Iranian President Hassan Rouhani warned that Tehran would “give a crushing response” if the arms embargo against his country was extended. He added that “if America wants to return to the [nuclear] deal, it should lift all the sanctions on Iran and compensate for the [2018] reimposition of sanctions.”

The landmark JCPOA nuclear deal was signed in 2015 by Iran, the United States, Russia, China, the United Kingdom, France, Germany and the European Union, and committed Tehran to scale back its nuclear programme and downgrade its uranium enrichment capabilities in exchange for sanctions relief, the return of some seized assets abroad and, after five years, an end to the UN Security Council arms embargo against the country. The Trump administration withdrew from the deal in May 2018 after lobbying by Israel, reinstituting tough banking and energy sanctions and threatening countries doing business with the Islamic Republic with secondary sanctions. Tehran has urged the JCPOA’s European signatories to develop tools to find a workaround to the US restrictions, and stepped back from some of its commitments to the deal. Tehran has insisted however that it would not pursue a nuclear weapon or any other weapons of mass destruction under any circumstances.

US State Dept. Says Russia and China Have No Reason to Vote Against Prolonging Iran Arms Embargo