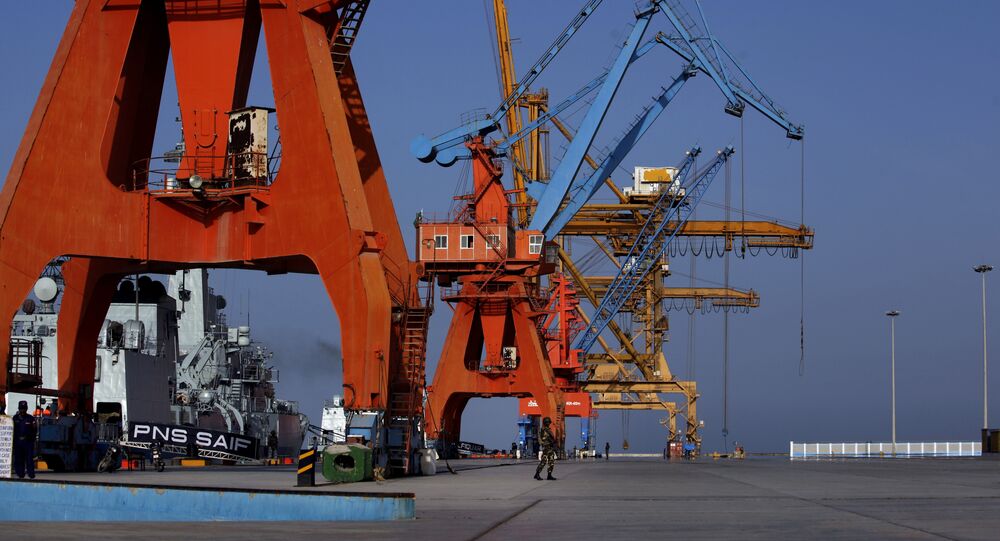 New Delhi (Sputnik): China financed more than 80 percent of the $248 million development cost of the port and it will bypass the long shipping route of Indian Ocean through the Strait of Malacca to receive energy.

In a major development that will have a strategic impact on the region, Pakistan has announced the opening of the Gwadar Port for transit trade with Afghanistan.

Abdul Razak Dawood, adviser for commerce and investment to Pakistani Prime Minister Khan, said that shipments of sugar, fertiliser, and wheat will be transported in sealed trucks to Afghanistan.

“In this regard, 16,000 MT of diamonium phosphate and World Food Programme cargo of 500,000 MT of wheat for Afghanistan will arrive next month. Ships from China will also offload at Gwadar", Abdul Razak Dawood said on Monday.

The adviser said that the opening of Gwadar, operated and managed by China, fulfils a long standing request by the business community and the shipping industry, paving the way for business opportunities and employment, both in Gwadar and along the nation's highways.

“The move will also jumpstart port operations in Gwadar Port and create the necessary eco-system for another big seaport in Pakistan", the adviser added.

Gwadar Port is considered a counter to Iran’s Chabahar which is being developing by India to bypass Pakistan for trading with Afghanistan and Central Asia.

It is expected that the strategic position of the deep seaport of Gwadar will attract huge oil transit business due to its strategic location.

The port connects South Asia, Central Asia, and the Middle East in terms of oil and gas resources and trade impetus.

Currently, around two-thirds of China's energy sources pass through the Strait of Malacca, which is very close to India’s tri-service command located on Andaman and Nicobar Island.

Earlier this year, China had urged Pakistan to step up security at the strategic Gwadar Port, considered the backbone of the CPEC in the wake of a series of militant attacks in the Balochistan region last year.