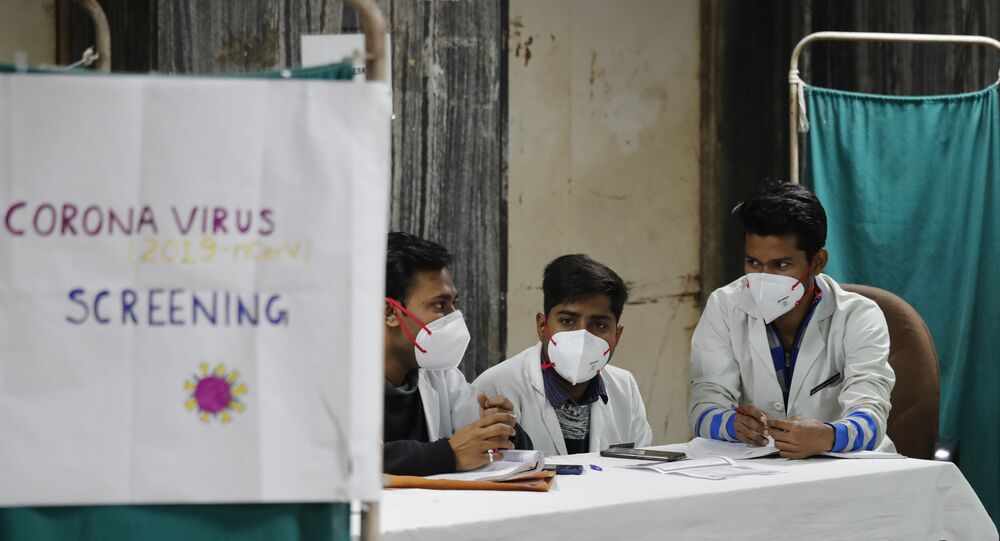 New Delhi (Sputnik): The situation in the world’s second most populous country continues to turn grimmer as India recorded its biggest daily jump in coronavirus patients with 678 new cases and 35 deaths on Thursday. The latest fatalities pushed the tally to over 6,600 COVID-19 infected cases and 200 deaths.

The country is likely to witness a steep rise in the number of COVID-19 cases in 10 days despite taking timely measures and the imposition of 21 days of lockdown, warns Arvind Kumar, Chairman of Center of Chest Surgery and Robotic Surgeon of Sir Ganga Ram Hospital, New Delhi.

Dr. Kumar says the situation could have been better but the rapid increase in the number coronavirus cases is a direct result of the Islamic missionary movement, the Tablighi Jamaat, which held mass meetings in New Delhi in mid-March.

“A conservative estimate would suggest India is going to see up to 50,000 coronavirus cases. So, in the next week or 10 days, we are probably going to see a continuous increase in the number of cases which will be the direct fallout of religious gathering of about 2,000 people which happened in Nizamuddin area of Delhi,” Dr. Kumar told Sputnik.

The religious event in Delhi’s Nizamuddin area became the hotspot of coronavirus cases in India, with nearly a third of cases, almost 1,440, related to the Markaz, the headquarters of the Islamic sect Tablighi Jamaat.

The government has claimed over 8,000 people visited the Markaz before and after the 13-15 March event.

“The 2,000 people, who attended the religious gathering in Delhi, moved out to other parts of the country in trains, planes and buses. So, obviously these people would have infected n-number of people, who would become manifest in the next week or 10 days. Thus, more deaths and cases await,” said Dr. Arvind Kumar.

He added the government still does not know how many people came into direct and indirect contact with the attendees of the gathering in New Delhi.

“Before it blows out of proportion, the only way to curtail the situation is to trace them and test them before they infect more people,” added Kumar.

Apart from Delhi’s Markaz mosque, Asia’s biggest and most populated slum, Dharavi in Mumbai has emerged as a breeding ground foe the coronavirus. The business capital of India, Mumbai is on edge since almost a dozen COVID-19 cases have emerged in the densely populated slums since a 56-year-old died on 1 April.

The government has jumped to a cluster containment strategy in which action is taken to contain the disease within a defined geographic area and break the chain of transmission, thereby preventing its spread to new areas.

Asked how effective could be the government’s cluster containment strategy in slum areas, Dr. Arvind said that it is second-most effective measure by the government after the introduction of 21-day national lockdown.

“While lockdown is a macro-level strategy, cluster containment is at micro-level. In simple terms, the strategy means – identifying that this is the guy with the virus, this is the road with a maximum number of cases, therefore seal that road.”

The doctor stated the strategy was first applied to the textile town of Bhilwara in Rajasthan, where 27 positive cases and two deaths were reported. The strategy led to successful containment of cases with no new reported case.

Can Rise in Temperature Lead to Waning of the Virus?

The doctor also busted some myths regarding the influence of climate on COVID-19 virus. With the little information about the novel coronavirus, officially named SARS-CoV-2, it was linked to previous studies in which many infectious diseases waned with the seasons.

“No. So, that is a conjecture. There is no proof that the sunlight will kill the virus. That was a conjecture that most of the countries from where initially the infection was reported were cooler countries, leading to speculation that the virus might tail off with the onset of summer. I don’t think that we should bank on this idea," said the doctor.

He added if the virus was sensitive to heat, it wouldn’t have spread in tropical countries like Australia and India where the temperature is above 30 degrees, as it is in southern India.

Are Micro-Particles in the Air Infecting Doctors?

With just one doctor for every 1,457 people in the country of over 1.3 billion people, the transmission of COVID-19 virus in doctors is a problem.

The country has recorded over 50 doctors and medical staff with coronavirus infection and two deaths despite protective gears and precautions.

“One main important thing to note here is that we do not have adequate numbers of PPE’s for our doctors everywhere. Therefore, doctors are getting exposed. Secondly, they are the number of COVID-19 positive patients who are not showing symptoms and they are coming in contact with the doctor for examination of some other problem, not related to the virus,” said the doctor.

The lockdown has to continue and there should not be any question regarding it as the number of infected people is going so steeply up, he added.