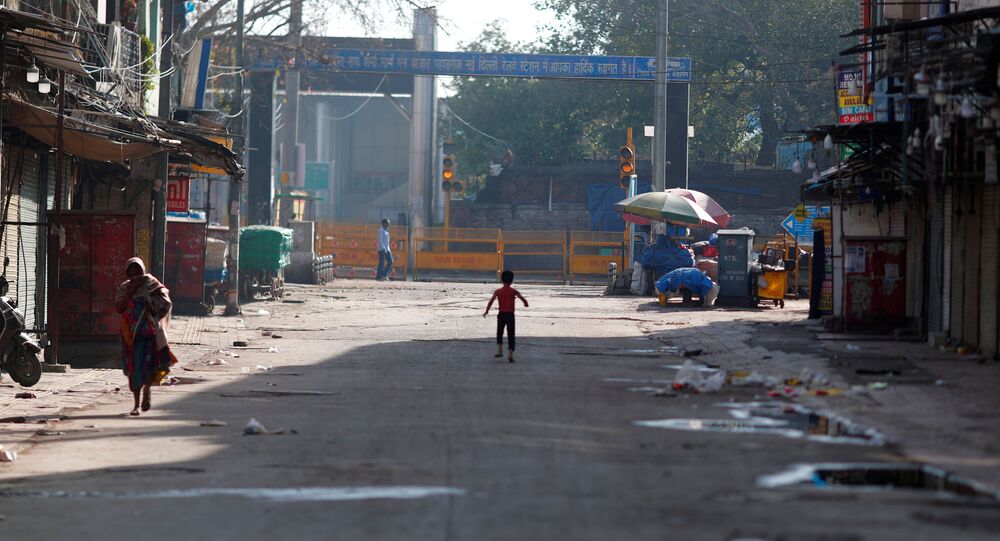 New Delhi (Sputnik): A Muslim organisation in India organised a religious gathering in the national capital on 16 March, with participants from Malaysia, Indonesia, Saudi Arabia, and Kyrgyzstan. But around 1,400 people continued to stay at the venue even after New Delhi ordered a 21-day lockdown, risking their health in the process.

India’s federal Home Ministry is considering to blacklist around 800 Islamic preachers from Indonesia, known as Tablighi, who came on tourist visas to attend a three-day religious conference in Delhi amid the coronavirus outbreak.

They would be blacklisted for violating visa norms as the group entered the country on a tourist visa but participated in a religious congregation.

The 3-day religious gathering hosted on 16 March at an Islamic shrine in the densely populated Nizamuddin area of south Delhi was attended by around 8,000 people from India and countries like Malaysia, Indonesia, Saudi Arabia, and Kyrgyzstan.

Delhi Police cordoned off the densely populated Muslim locality on Monday (30 March) to ensure execution of COVID-19 lockdown norms, and people there were subjected to medical examination. Some 200 people were taken to hospitals for testing and 24 people tested positive for COVID-19.

“We are not certain of the number but it is estimated that 1,500-1,700 people had assembled at the Markaz building. 1,033 people have been evacuated so far - 334 of them have been sent to hospital & 700 sent to a quarantine centre", news agency ANI quoted Satyendar Jain, Delhi Health Minister as saying.

Six persons from Telangana, who attended the gathering have died since testing positive for the coronavirus, while a cleric died in Srinagar last week.

On Friday (27 March), six persons from the Andaman and Nicobar Islands, who had attended the meeting also tested positive for the coronavirus.

The gathering was reportedly organised without the permission of the police or local authorities.

Thirty-two deaths have been reported since the first coronavirus case was dectected on 30 January. There are currently 1,251 active cases in the country, according to the federal Ministry Health and Family Welfare.

With Suicide Cases on the Rise, Indian State Orders Distribution of Liquor Amid Lockdown

Twist it like Modi: Indian PM Shares Animated Videos of Him Doing Yoga to Inspire People in Lockdown