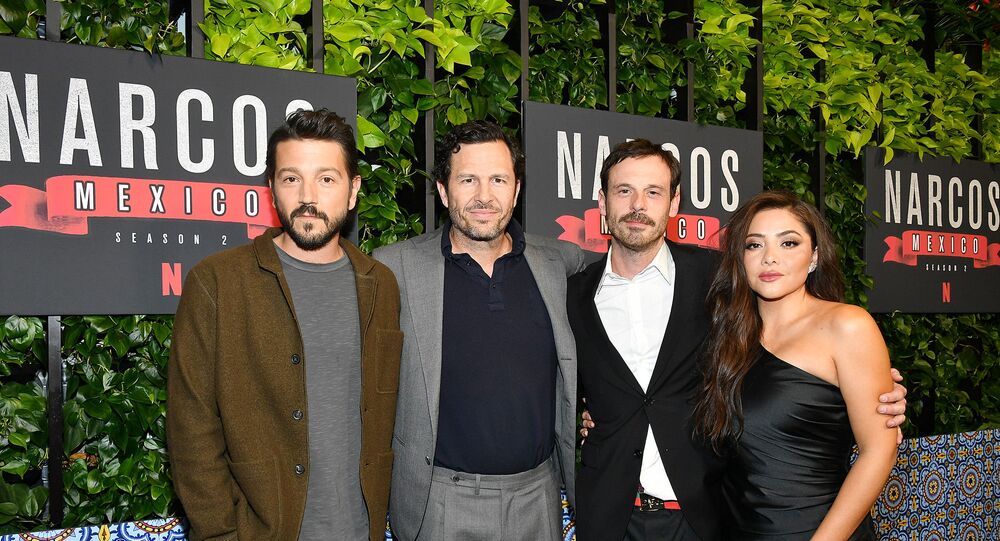 As Fans Wait For Next Series of Netflix Series Narcos: Mexico, What Happened Next?

Spoiler alert! Season Two of Netflix's hit series Narcos Mexico ended with cartel leader Miguel Angel Felix Gallardo in prison. Fans of the show are already eagerly awaiting the next series but what happened to the Mexican cartels since 1989?

At the weekend 19 people were killed in a shootout between rival drug gangs in the hamlet of Chuchuichupa in northern Mexico.

The clash is believed to have been between the dominant Sinaloa Cartel and rivals from Ciudad Juarez.

The Sinaloa Cartel featured heavily in season two of Narcos: Mexico, where they were subordinate to the Guadalajara-based Felix Gallardo.

At the end of season two - set in 1989 - Gallardo tries to impose his will on the other cartels who make up part of his “federation”, but he miscalculates catastrophically.

Rise Of The Lord Of The Skies

Amado Carrillo Fuentes, from the Juarez Cartel - based in the border town of Ciudad Juarez - persuades the leaders of the other "plazas" in Tijuana and Sinaloa to reject Gallardo’s terms and quit the federation.

Soon afterwards Gallardo (played by Diego Luna), having lost his power on the streets, was arrested and is visited in jail by fictional Drug Enforcement Administration (DEA) agent Jimmy Breslin.

So what happened in the intervening 30 years between Felix Gallardo’s incarceration and today?

Gallardo managed to dominate the Mexican drugs world in the 1980s because he had an exclusive deal with the Cali Cartel to import and smuggle Colombian cocaine.

But Amado Carrillo Fuentes took that contract over and in the early 1990s he earned the nickname El Señor de Los Cielos (Lord Of The Skies) because of his ability to fly huge quantities of the drug into secret airfields in northern Mexico, from which the coke was transferred to trucks and smuggled over the border to the huge US market.

Carrillo Fuentes knew the Mexican cartels could make more money working together and tried to avoid confrontation with the Arellano-Felix brothers, who ran Tijuana, the Sinaloa Cartel (then run by Hector Palma, known as El Guero (Whitey) and his sidekick Joaquin Guzman, and the Gulf Cartel - run by Juan Guerra and his nephew Juan Garcia Abrego.

Fuentes flew in most of the cocaine and passed it on to the other cartels to smuggle over the border in various ways.

All went well until July 1997 when Carrillo Fuentes, being hotly pursued by the Mexican government and the DEA, underwent plastic surgery in a bid to permanently disguise his appearance.

But the procedure inexplicably went wrong and Carrillo Fuentes died, aged just 40, on the operating table.

Four months later the bodies of the two surgeons who operated on him were found encased in concrete and showing signs of torture.

Almost immediately war broke out between the Juarez and Tijuana cartels.

Meanwhile the Gulf Cartel and its new leader Osiel Cárdenas Guillén - who took over in 1996 - hired several former members of the Mexican Army’s Cuerpo de Fuerzas Especiales (Special Forces Corps) as a brutal gang of enforcers.

They became known as Los Zetas after Z1, the radio codename of their original commander, Arturo Guzmán Decena, who was shot dead in a restaurant in 2002 by his erstwhile comrades in the Mexican Army.

​Cárdenas Guillén was arrested in 2003 and later extradited to the US, where he was jailed for 25 years.

In 2010 Los Zetas, led by Heriberto Lazcano aka Z3, suddenly broke away from the Gulf Cartel and became a powerful drug smuggling organisation in their own right.

The violence between Los Zetas, the Gulf Cartel and the Sinaloa Cartel spiralled almost out of control between 2010 and 2012, with numerous massacres, bombings and beheadings.

President Felipe Calderon, and his PAN party, had taken a hardline against the cartels but it just increased the violence and his approval ratings fell.

The Institutional Revolutionary Party (PRI) - who feature heavily in Season Two of Narcos Mexico, largely because of their corruption and vote-rigging - had finally lost power in 2000 but in 2012 they were back in government under their handsome young leader, Enrique Peña Nieto.

Peña Nieto became President and, with his soap actress wife Angelica Rivera beside him, pledged to rebuild Mexico and improve its infrastructure, with a new airport for Mexico City at the top of the agenda.

"There will be no pact nor truce with organised crime," said the new President.

Four years later the PRI lost the presidential election and Peña Nieto left office with an approval rating of 18 percent.

During his term - in fact long before it - the Sinaloa Cartel had become the most powerful and feared gang in the country, eclipsing the Arellano-Felix brothers in Tijuana and even the Gulf Cartel and Los Zetas.

Hector Palma had been arrested in 1995 and extradited to the US to face a long jail sentence but his able lieutenant, Joaquin Guzman, had taken over the reasons and become Mexico’s number one godfather.

Guzman - better known to the world as El Chapo (Shorty) - was played in Season Two of Narcos by Alejandro Edda.

In an interview with the Hollywood Reporter, Edda said: "I believe we see Joaquín Guzmán showing ambition in season two. I believe it comes from his own childhood and wanting to be that man, that provider. He had the ambition to be a boss; he had ideas. You hear him telling his mother in that one scene, 'They don’t listen to me' and 'they don’t respect my ideas.' But he knows that he has these ideas and they can take them far."

El Chapo - King Of The Tunnels

El Chapo is shown pioneering the building of tunnels under the US border to bring cocaine into the country.

Guzman was captured three times by the Mexican authorities but kept escaping, often with the connivance of the prison staff, who were no doubt richly rewarded.

El Chapo escaped for the last time in July 2015 - burrowing out of a tunnel dug beneath the shower adjacent to his prison cell.

While on the run he reached out to Mexican actress Kate del Castillo and, through her, arranged a secret rendezvous with Hollywood actor Sean Penn at his remote hideout. Penn would interview him, in October 2015, for an article which eventually appeared in Rolling Stone magazine.

In January 2016 El Chapo was finally tracked down to a house in the seaside town of El Mochis in northern Sinaloa but he escaped through a tunnel and stole a car.

When the car was finally stopped by police, El Chapo offered them huge bribes to let him go and when they refused he warned them: "You are all going to die."

El Chapo was eventually extradited to the US and put on trial in New York.

In July 2019 he was jailed for life after a trial which heard he had paid a US$100 million bribe to President Peña Nieto while he was on the run. Peña Nieto has denied the allegation.

The Sinaloa Cartel is reportedly now headed by Ismael Zambada, aka El Mayo.

In Narcos Mexico, Miguel Angel Felix Gallardo fell because he wanted too much. He wanted to force the hands of the Colombians. He also betrayed Don Neto and Rafa. Amado Fuentes played him in the end.

​Colombian cocaine continues to flow to the US via Mexico and the DEA and the Mexican government are still fighting the "war on drugs."

As for Gallardo, the former El Jefe del Jefes (boss of bosses), he is still in prison. Now 74, he is will be eligible for parole in 2026.