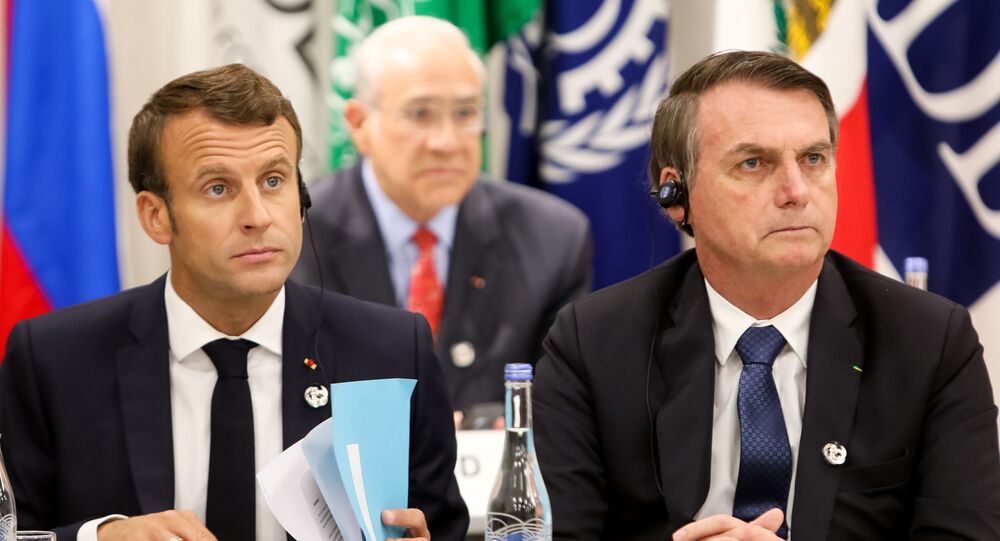 The political-turned-personal row between French President Emmanuel Macron and Brazilian counterpart Jair Bolsonaro in 2019 over the ongoing Amazon wildfires has caused some at the top of Brazil’s military, recently tasked with identifying the main threats facing their country in the next 20 years, to offer a curious bad guy.

French diplomats jokingly responded to a leaked military report in which high-ranking Brazilian officials identified France as their country’s main strategic threat over the course of the next 20 years. The secret draft, titled “Defence Scenarios 2040”, was initially obtained by the Folha de Sao Paulo newspaper.

According to the outlet, the document contains answers from 500 respondents, mostly in the military, and is believed to have greatly contributed to the ongoing review of the nation's defence strategy. The answers were allegedly recorded over the course of 11 meetings held during the second half of 2019, and are believed to reflect a general sentiment among the high-ranking members of the country’s forces.

In four strategic scenarios mentioned in the document, France was reportedly listed as the most consistent threat to Brazil, reflecting the deteriorating relationship between the two states following a political row for several weeks during summer 2019, between Brazilian President Jair Bolsonaro and French counterpart Emmanuel Macron, over ongoing wildfires that have continued to rage in the Amazon rainforest.

At the August 2019 G7 summit, Macron backed the idea of giving the world’s largest rainforest - often called “the lungs” of the Earth - international status. Bolsonaro quickly denounced the idea, accusing Macron of a “colonialist mentality” and attempting to undermine Brazil’s sovereignty.

© AP Photo / Petros Karadjias
Protesters with banners block the road outside of the Brazilian Embassy during a protest in Nicosia, Cyprus

The diplomatic row over the destruction of the Amazon rain forest stipulated the scenario of a potential request by Paris for UN approval for intervention into indigenous lands in 2035, while concurrently backing the emancipation of a local Yanomami tribe whose life is threatened by encroaching factory farms.

Not all of the Brazilian military predictions listed in the document sound realistic, however, as some go as far as to suggest that the country should be prepared for a deadly attack that would use the Wuhan coronavirus against participants in the Rock in Rio music festival in 2039.

The French embassy in Brazil later responded to the publication of the leaked document, branding it as being based on the “limitless imagination” of its authors, suggesting that it ignored the fact that France remained the country’s “main military partner” and a close friend.

Brazil’s Ministry of Defence also weighed in on the controversy surrounding the report. It did not deny the authenticity of the poll, but argued that the document was not a reflection of the government’s position and was only a part of “academic work” and “the first draft of a preparatory study”.