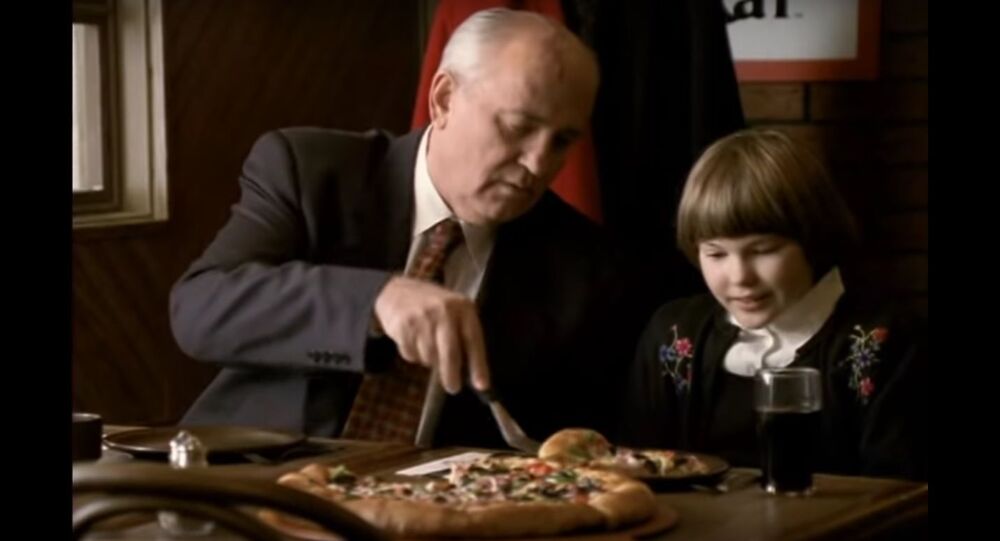 Despite the former Soviet leader having very low popularity in Russia, where the pizzeria chain was actively expanding, Pizza Hut’s heads decided he would make an excellent addition to their new ad targeting the whole world.

Although it has since passed well over 20 years, little is known about how the only president of the Soviet Union and the person who arguably facilitated its dissolution, Mikhail Gorbachev, wound up advertising the US fast food chain Pizza Hut in 1997.

According to Foreign Policy Magazine, citing various sources who participated in the filming of the ad, the pizzeria wanted their new advertisement to have an "idea that truly travelled across continents" and they decided that Gorbachev, who at the time was highly popular in the West, was the right person to deliver it. At the same time, the company, which was then expanding its network in Russia, chose to disregard the Soviet leader's unfavourable position at home – a year before filming the ad he lost the presidential race, accumulating a mere half percent of the total votes.

Gorbachev himself reportedly long hesitated to agree to take part in the venture and the video crew feared that the filming could be thwarted up until the last moment. According to Foreign Policy Magazine, his wife, Raise, played a part in his hesitation, as she was concerned that participating in the promotion of a Western pizza chain would only further damage Gorbachev's image.

But in the end the former Soviet president agreed, although not without conditions, the magazine reported – he had the final say on the ad's script and he wouldn't be eating pizza himself, arguing that it would be an inappropriate thing for him to do as a former leader. Pizza Hut was disappointed by this decision, but managed to broker a compromise – his granddaughter, Anastasia Virganskaya, did the eating part. However, according to Ted Shaine, the head of the advertising firm BBDO that did the filming, Gorbachev didn't turn down the offer to eat some pizza off-screen.

According to the account of another person who took part in filming, Scott Helbing, Pizza Hut’s advertising executive, Gorbachev motivated his participation in the campaign by saying that "pizza is for everyone". But that was not the only motive – Gorbachev confessed that he also needed the money to fund the Gorbachev Foundation, conducting historical and political research that could potentially be helpful to the young Russian Federation.

While the sum that he was paid remains a secret, Foreign Policy estimated it to be at least in the seven-figure range in today’s dollars, while the filming budget in general was estimated in "the low millions of dollars". The production team even managed to negotiate shutting down all of Red Square on the filming day, the magazine said.