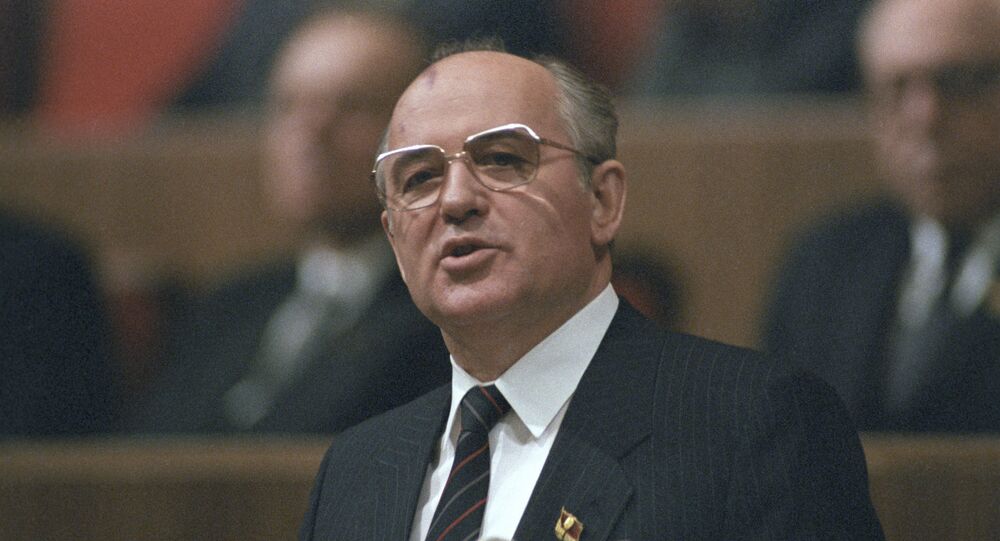 Gorbachev became General Secretary of the Soviet Union in 1985, and served as the first and only president of the USSR between 1990 and 1991, after which the country ceased to exist.

Former Soviet leader Mikhail Gorbachev has revealed to German news magazine Der Spiegel who he believed was responsible for the collapse of the USSR, explaining that the members of the government who attempted to organise a coup against him and then-Russian republic leader Boris Yeltsin were the chief culprits.

“Those who organized the coup in August 1991, and who took advantage of the weakened position of the president of the USSR, are responsible for the end of perestroika and the collapse of the Soviet Union,” Gorbachev explained, speaking to the German magazine on the 30th anniversary of the fall of the Berlin Wall.

He added that although he understood the possible risks of perestroika, the political movement to reform the country which he initiated in the mid-1980s, he and other leaders of the country understood reforms were necessary.

“It was impossible to live as we had before. And an essential element of perestroika was new thinking in foreign policy, which encompasses both the universal values of nuclear disarmament, as well as freedom of choice,” Gorbachev noted.

Gorbachev stressed that he did not regret perestroika, but recognised that certain mistakes were made in the path of reforms. In any case, he said he believes Russia will never return to a ‘totalitarian system’ of government.

This week, German President Frank-Walter Steinmeier thanked Gorbachev for his role in helping to reunite Germany, saying Gorbachev’s personal courage was the key ingredient in helping to end the divisions between the German people and of Europe as a whole. Steinmeier wished the former Soviet leader good health, optimism and prosperity.

Mikhail Gorbachev became leader of the Soviet Union in March 1985, kicking off a broad-ranging campaign to kick conservative communists out of positions of leadership, and, starting in 1987-1988, introducing limited market reforms which led to the formation of cooperatives and to increased freedom for industrial enterprises. Between 1989 and 1990, he oversaw broad political reforms which led to direct elections and an end to the Communist Party’s monopoly on political power, and, inadvertently, the rise of nationalist and separatist sentiment in the USSR’s republics, including in the Russian republic led by Boris Yeltsin.

In August 1991, members of Gorbachev’s inner circle initiated a coup attempt against him in a bid to halt his continued reforms. These reforms included a New Union Treaty looking to grant over two dozen additional autonomous regions of the USSR near-republic level powers which, if implemented, could have seen the Soviet Union breaking up into dozens of new countries, rather than the 15 it broke up into historically. The coup attempt failed, the Communist Party was banned, and Gorbachev returned to Moscow, his powers significantly weakened.

On December 8, 1991, the leaders of the Russian, Ukrainian and Belarusian republics met in a state dacha in a Belarusian nature preserve and signed an agreement declaring that the USSR had ceased to exist. On December 25, Gorbachev appeared on television and resigned, marking the formal collapse of the Soviet Union.

Although widely praised as a visionary global leader for his efforts to end the Cold War and increase global cooperation on issues like climate change, Gorbachev has also been heavily criticised in his home country for the failure of his economic and political reforms, which led to the dismantling of the Warsaw Pact security alliance, the end of the USSR’s superpower status, and the collapse of the country itself. In the 1990s, Russia and other former Soviet republics were plunged into a period of unprecedented poverty and national humiliation. In 2003, a report in the medical journal BMJ calculated that between 2.5-3 million Russian adults died prematurely between 1992-2001 as a result of the Soviet collapse. Hundreds of thousands more from other republics perished in civil wars, as a result of gang violence, and due to other calamities during the same period.