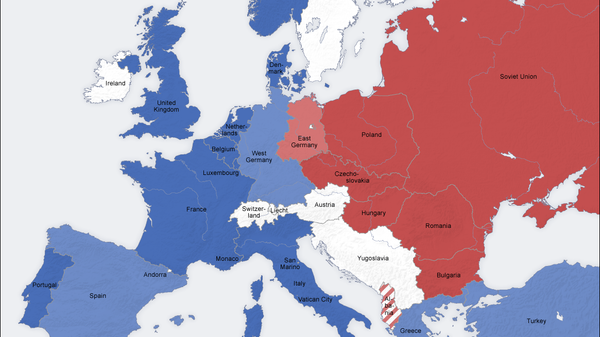 Ilya Tsukanov
All materialsWrite to the author
Earlier, in an interview with German media, the former Soviet leader revealed who he believed was responsible for the collapse of the Soviet Union, saying that the organisers of the August 1991 coup attempt against him were to blame.

While geopolitical observers continue to debate Moscow's position vis-a-vis NATO since the end of the Cold War, former Soviet leader Mikhail Gorbachev has commented on the oft-made suggestion that he 'surrendered' Eastern Europe to Russia's geopolitical adversaries in the late 1980s, saying that his administration’s reaction to the Eastern European revolutions of 1989 was based on his doctrine of ‘new thinking’.

“We could not deny our neighbours and our friends the rights and freedoms that people already enjoyed in the USSR,” Gorbachev said, speaking to Le Figaro.

“We did not interfere in their internal affairs. And when I am criticized for ‘giving away Eastern Europe’, I respond: To whom did I give it away? Poland to the Poles, Hungary to the Hungarians, Czechoslovakia to the Czechs and Slovaks,” Gorbachev stressed.

Recalling the moment when he learned that the Berlin Wall had been breached in November 1989, Gorbachev noted that while the first information he received “did not give a complete idea of what was happening, it was obvious that something very interesting was going on, and that it would have very serious consequences.”

“But it was not unexpected,” he added.

According to Gorbachev, he and the rest of the Politburo had come to a unanimous decision at the time that there could be no question of the 300,000+ Soviet troops stationed in Germany from intervening in the process in any way, and these troops were ordered to remain in their barracks.

Moscow’s central goal was to make sure “that these events evolve peacefully and, at the same time, to ensure that the interests of our country and European security are taken into account,” Gorbachev said.

Between June and December 1989, every single one of the USSR’s erstwhile allies in Eastern Europe, including Poland, Hungary, Czechoslovakia, Bulgaria and Romania, as well as East Germany, experienced political revolutions which led to the ouster of their hardline communist leaders and the their replacement, in most cases, with reformers seeking to orient their countries toward Western Europe and the United States. This process was completed in October 1990, when East Germany reunified with the Federal Republic of Germany.

In the years leading up to these revolutions, Gorbachev actively encouraged the USSR’s allies to begin perestroika-style political and economic reforms, with most of the Eastern Bloc’s leaders cautiously refusing Moscow’s lead. In some cases, including Hungary and Bulgaria, Gorbachev supported the elevation of liberal reformers to positions of leadership, while in others, he supported revolutions against them directly, as in the case of Romania. 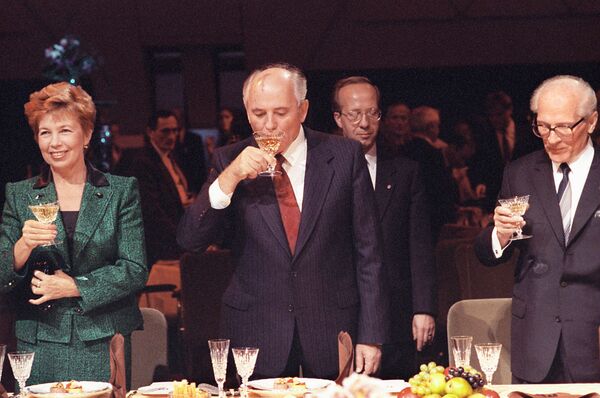 Soviet General Secretary Mikhail Gorbachev and East German leader Erich Honecker celebrating the 40th anniversary of the German Democratic Republic, October 1989. Days after the ceremony, Honecker was ousted, and just over a year later, the former East Germany was incorporated into the Federal Republic.
© Sputnik / Борис Бабанов
/
Go to the photo bank

Following the success of the anti-communist revolutions, the countries of Eastern Europe moved to leave the Moscow-led Comecon economic bloc and the Warsaw Pact security alliance, with both organisations dissolved in mid-1991, less than half a year before the USSR itself collapsed.

While praised abroad for his efforts to end the Cold War and the dangerous arms race, at home Gorbachev has been criticised for a variety of reasons, including his failure to receive a written guarantee from NATO not to expand east of Germany following the country’s unification in 1990. Despite the end of the Cold War and the disappearance of the ‘Soviet threat’, the United States did not withdraw from its bases in Western Europe. Furthermore, between 1999 and 2004, every single member of the former Warsaw Pact, as well as the former Baltic republics of the USSR itself and several republics of the former Yugoslavia, joined NATO, to Moscow’s concern.