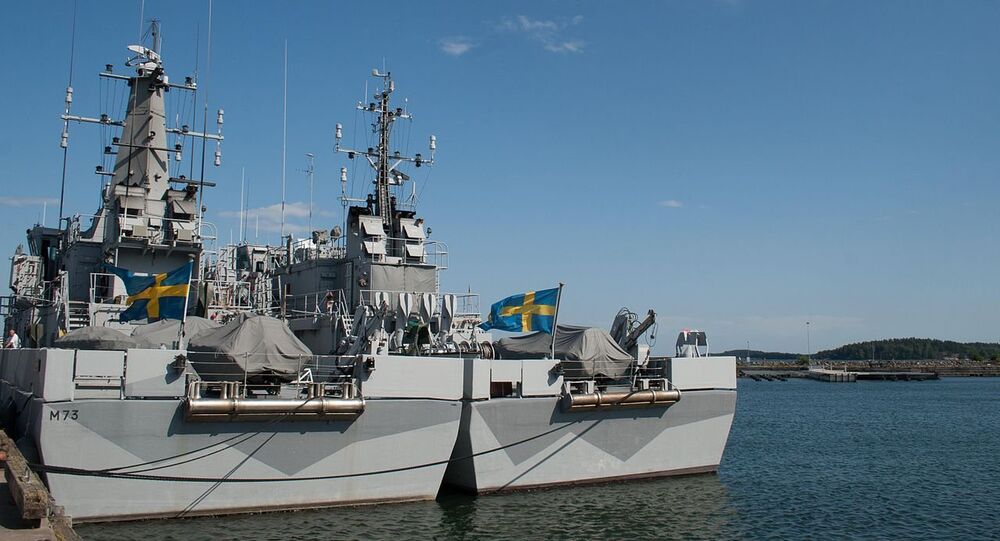 The Swedish Navy's triumphant return to its Cold War-era fortress fits the country's ongoing militarisation pattern, characterised by budget hikes and the return of the draft, coupled with panic-inducing rhetoric.

After 15 years of disuse, the Muskö naval base 70 kilometres south of Stockholm is once again part of Sweden's armed forces, the newspaper Svenska Dagbladet reported.

On Monday, a re-inauguration ceremony was held with the Navy's music corps and a parade, exactly 50 years after Muskö's original inauguration in 1969.

“It is probably the world's largest underground base. Here we have a very important and unique resource that we can develop in different ways”, Hultqvist explained in his speech.

​For starters, a 100-strong force will be placed at rejuvenated Muskö, which was decommissioned in 2004; its shipyard was sold to ThyssenKrupp.

“The goal is that we should sit inside the mountain to increase safety. The mountain is an impressive facility that it feels wise to utilise,” Navy commander Jens Nykvis Nykvist said. “This is important, it is a big thing for us. It is a great advantage not to be lumped together in the city,” Nykvist said, suggesting that the decentralisation plan “reduces vulnerability” and “enhances tactical possibilities”.

The plan was put together by parliament about a year ago. In addition to the Navy moving to Muskö, the Army will be placed in Enköping, whereas the Air Force  will be located in Uppsala in what was described as a “spread of management”.

Other specialists, however, were more specific as to why the underground fortress had to be revitalised.

“The move is based on the calculation that the Russians could use powerful weapons which demand the level of protection that only Muskö can provide,” Niklas Granholm, a senior analyst at the Swedish Defence Research Agency, said, as quoted by The Guardian.

Meanwhile, the professed “Russian threat” has become a mainstay in the Swedish media. The very same Defence Minister Peter Hultqvist and other officials have repeatedly cited Russia the reason for Sweden's enhanced defence preparations.

While Muskö ceased to play a pivotal role in Swedish defence decades ago, the navy never left the island altogether. Last year, British and Belgian tourists tried to infiltrate the base, but were met with warning shots before ultimately being arrested.

It really doesn’t get more #ColdWar than this. #Sweden built itself a huge underground naval base at #Muskö in the 1950s. Pure #JamesBond & parts still remain in use today. If you struggle to park a car, like I do, it’s scary to think of manoeuvring warships through these arches. pic.twitter.com/wmEeip1uh8

​The re-commissioning of the Muskö base fits the ongoing militarisation pattern in Sweden, which has already seen such steps as drastic budget hikes, the return of conscription and the armed forces' return to the Baltic Island of Gotland, previously identified as the likely entry point of the perceived aggression. For the population to stay put, hundreds of thousands of leaflets explaining how to survive a nuclear attack were delivered to Swedish households, for the first time in decades.

After the end of the Cold War, Sweden cut its military spending sharply, from about 3 percent of GDP in the 1980s to barely 1 percent in the 2010s.

Currently, the Swedish Armed Forces is busy evaluating the Defence Committee's proposal for 2021-2025. Internally, there is now a tug of war between the Army, the Navy and the Air Force on how resources should be distributed.